A Beer in Bronte Country....

Whilst I live close to the area made famous by the Bronte sisters, it is not somewhere I have visited very often in recent years. But last Saturday, with the trains not running and football miles away, I decided I would take a trip over there.... 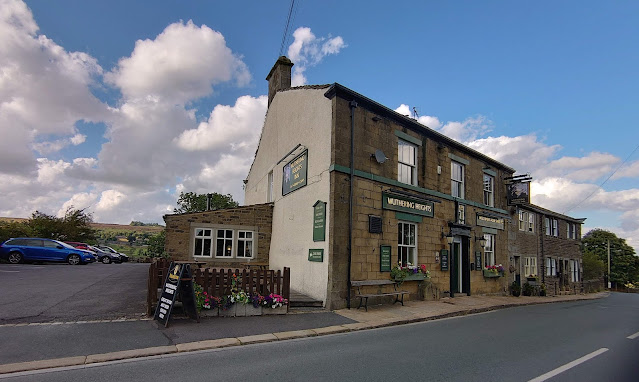 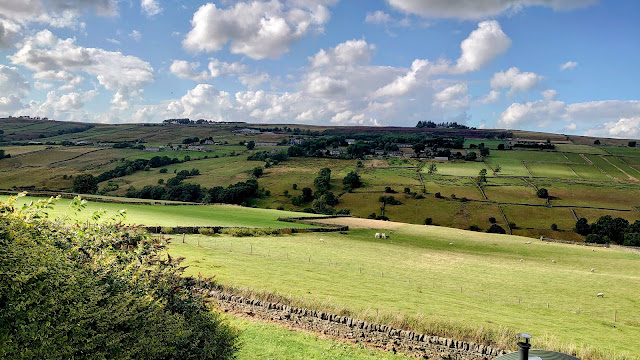 I walked back to the front of the pub, where a group of  walkers and a middle-aged couple were waiting for the bus back to Haworth. I walked in, there was a wood-panelled bar to the left. There was nobody behind the bar and there was a lady waiting, who was soon joined by an older guy. A minute went by. There was still nobody behind the bar. I looked around. There was a group of walkers sat at a table in a room to the left of the bar. Behind me, there was another room to the right where I'd come in, with a further room at the far side of the bar. A corridor with internal windows went off the right of the bar, down which the older guy went off, grunting a couple of words, then returned, and finally a younger guy appeared behind the bar. I waited my turn, and when it came I ordered a half of Moorhouses' White Witch from one of the four hand pumps that adorned the bar, which also offered Taylors Landlord, Theakston Best Bitter, and a porter from Pennine. It was, I thought, a typical Yorkshire Dales rural pub line-up, although I was of course in West Yorkshire, but to counter that, pump clips and beer mats displayed above the bar were testament to the variety of beers from all around that have been served here.
I took my half of White Witch (£1.95 paid for in cash as no card sales under £10) and went to sit in the afore-mentioned room to the right of the entrance. If you were thinking as you walked in that the pub was named after the song Wuthering Heights, the large number of pictures and other items connected to the Brontes in here left you in no doubt that it was named after the novel. There was not even a tiny photo of Kate Bush or a framed copy of the 1978 number one single to be seen! I took a sip of my beer; it was good (NBSS 3.5), and it was obvious that the landlord cared very much about the quality of his beer. A few more people popped in, the lad behind the bar greeting them all in a friendly and welcoming manner as he dispensed their drinks. Having been absent for a few minutes when I'd got there, it was clear that he was now staying put.
I liked the Wuthering Heights, and on balance it was the best pub I visited all day. The beer was good, the cost of it was better value than earlier, it was an attractive building in a beautiful village, and it was friendly. It had a real village pub feel to it, and in a good way. It was not hard to imagine being marooned in here with a pint of good beer for company in front of a roaring fire (or to be more accurate, log burner), whilst a raging storm swirled around and battered the outside of the pub on a dark and cold winter's night, conjuring up images from the novel with which it shares its name.... 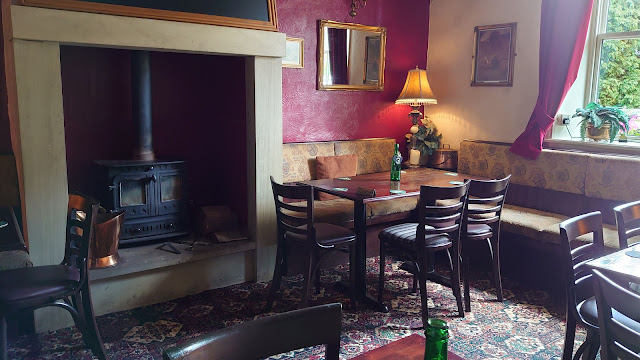 I finished my half, went back to the car, and set off, homeward bound. Rather than taking me back to Haworth, the satnav instructed me to turn right at the edge of the village along Reservoir Road towards Oxenhope. The eponymous reservoir soon appeared on the right, the banked sides exposed above a well-down water level. And then it was up a hill followed by a steady descent, with several cottages and farm tracks off to the side of the road. A few minutes later, I was passing through the first houses and terraces as you come into Oxenhope. Arriving at a main road, the satnav instructed me to turn left on to it, and almost immediately on the left was a pub I had thought about doing if time permitted. It just about did, and so I made a sharp turn into the car park at the side of the pub.
The pub in question was The Bay Horse, whose car park backs on to the entrance to Oxenhope Cricket Club, who ply their trade these days in the Halifax Cricket League. There was a match on, but even though I parked close to the entrance, I was reassured by a high and strong-looking wire fence designed to keep all but the wildest 6's away from the windscreens. I walked round to the front of the pub, where there were plenty of tables outside, but only one was occupied, by a group of 30-some ladies. I walked in, the bar was facing the door and from a selection of around 7 cask beers I opted for a half of Rudgate's 3.8% Jorvik blonde session ale, served by a friendly middle-aged guy in a white shirt who could only have been the landlord. The pub had the feel of a town pub and was reminiscent of an old Tetleys' pub (which it probably once was). It consisted of one large room, although with different areas, with what appeared to be a further room beyond a folding screen. I duly plonked myself at a small table to the side of the bar. The beer, one I had not drunk for a while, was in very good nick (NBSS 3.5), and was the best value of the day at £1.90 a half. It was the kind of place where I felt it would be great to pop in for a pint if it was on my doorstep.
Having finished my half, I returned to the car, and windscreen still intact, I set off on the way home. It had been an enjoyable afternoon going around an area I have neglected somewhat over recent years. It made me think about getting my walking boots out and traipsing the moors maybe up to Top Withens, knowing that there are several decent pubs awaiting for a post-walk pint....
Follow me on twitter: @realalemusic