Less than 10 minutes on the train from my base in Brighouse is Mirfield, and I went over recently to check what this small town in the Lower Calder Valley has to offer these days.... 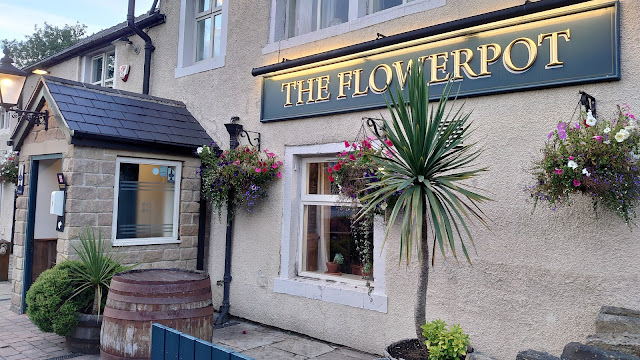 It's a place I have driven through for years, hardly giving it a second thought, visited on several occasions in the past, but with 4 entries in the current Good Beer Guide, two of which I had never visited, and it being so close to home, I realised this town of around 20,000 souls was way overdue a visit. It is also the birthplace of world-famous actor Sir Patrick Stewart, Jean-Luc Picard of Star Trek: The Next Generation no less, former Chancellor of Huddersfield University, and plenty more, as well as Brian Robinson, the first British cyclist to win a stage in the Tour De France, way back in 1958 and long before the more recent ascendancy of the sport in this country.

The weather earlier in the day had been showery and changeable, but late afternoon blossomed into a bright sunny evening, meaning my original working title for this piece of A Murky Night in Mirfield was no longer appropriate. The canal in particular looked good, and the pleasant evening had even brought a couple of canoeists out. Technically speaking, it isn't a canal; because some of the 21.5 mile waterway takes advantage of the River Calder on its journey from Wakefield to Sowerby Bridge, it is called the Calder and Hebble Navigation, and like several of the towns that dot the route, Mirfield has embraced the opportunities it affords for leisure these days, with a marina and a host of barges moored here, whilst the towpath is a magnet for walkers, joggers, cyclists, and the fishing community.

Anyway, back to the matter in hand. One of the pubs I hadn't been to was the Old Colonial, around 25 minutes walk from the station. I walked past a park, one of several cricket grounds in the town, and through leafy suburbs and past new builds, gradually climbing although the Calder Valley is much wider and the slopes more gentle than back up the valley. I arrived at my destination, walked through a gateway, and came across what looked like a private house, heavily festooned with flowers as seemed to be the case across the town.

The external appearance does not prepare you for what lies within. It is a former club, and as such it still retains the appearance of a rather upmarket one; leather chesterfields, dark wood panelling, fancy brassware, plush furnishings, subdued lighting. The hum of conversation from a generally older clientele pervaded the room, and with fake book wallpaper in the corner where I sat, I am sure I detected the whiff of cigar smoke from years gone by and could imagine two crusty old boys bemoaning the latest collapse in the Test Match and going apoplectic at the very thought of The Hundred - "it's just not cricket!".
I snapped out of it and considered my beer. I had ordered an MPA from JW Lees, not a beer you tend to see in West Yorkshire, a pleasant 3.7% golden slightly hoppy session ale which I rated as NBSS 3. There was another hand pump serving the rather bland Scotts 1816 from Copper Dragon. I realised I needed to get a move on, so I finished my beer. A couple sat near the door bade what I thought was a farewell, but they were actually telling me I was going into the Ladies rather than the exit! A quick about-turn, and with a red face, I made it through the correct door. The Old Colonial is certainly an unusual place, very quirky, but well worth a visit.

Back down the hill, and I came across a footpath which promised the town centre in 470 yards, so I took it and after skirting past a football pitch, I walked behind some houses, and I emerged on to Knowl Road, just off the main road through the town and very close to the Knowl Club, the other Good Beer Guide entry that I had never visited. Now in my experience you never know what you going to get with a club, and I have been in some horrors, but having been a member of Stalybridge Labour Club for a few years and as a current member of Hebden Bridge Trades, I know that some can be excellent. The Knowl Club, a former Liberal club set in an imposing building in the midst of housing, proved to be the latter. The bar was situated in the middle down one side of a long room, and I noticed 2 beers were on, from which I selected Saltaire Blonde which cost me the princely sum of £2.85!. The steward suggested I sat down and he'd bring it over as it was a bit lively, so I grabbed a free table opposite the bar. My beer was brought over to me shortly afterwards, and I took a sip. Too often, Saltaire Blonde is bland and insipid, but this was spot on, and easily the best pint of the evening (NBSS 4). The club itself had a quiet calm about it and as a non-member I was made most welcome. Well worth checking out.

Next up was a pub I had been in many times, the Navigation, now seemingly re-branded as the Navi, set beside the canal and marina and a few minutes walk from the station's eastbound platform. At one time they held regular beer festivals, usually featuring beers from a particular county or area, and we went along several times to discover some different beers. The pub has also been popular for many years with Rail Ale Trailers, but the makeover suggests it is aiming at a different market. Outside it has an excellent canalside beer garden with an outside bar, whilst inside it has been opened out a little as part of the makeover, re-decorated, kitted out with new seating, and generally smartened up but at the same time it seems to have lost the homely quirkiness that it had before. And with the staff, who to be fair were all very polite and friendly and provided a very efficient service, now wearing branded uniforms, it is sadly reminiscent of a general chain pub. Beer wise, it has always featured Theakstons heavily, with the bitter, Old Peculier, XB, and the rarely seen Lightfoot on the bar. That is still the case, but the choice on this time also featured Magic Rock Ringmaster and Highwire, and Malamute, from Lords brewery in Golcar. I had a pint of Ringmaster, which was pretty good (NBSS 3) although not quite up to Kings Head, Huddersfield standards, and I followed that with a pint of Malamute a 4.5% unfined (but clear) session IPA from Lords, whose beers rarely seem to make an appearance in my neck of the woods. It was quite pleasant and again I rated it as a NBSS level 3. As I left the Navi I noted the presence of a couple of bouncers, which I always find a jarring experience in a real ale pub and it is a shame that the pub feels that it needs their presence.

I had time for another pint, so I headed to the Flowerpot, which is another pub I have visited several times in the past. It is a very popular Ossett tied house with a front terrace and a beer garden beside the River Calder, based in a sprawling, farmhouse-like building with several drinking areas about 10 minutes' walk from the railway station. It serves a decent selection of Ossett beers along with those from other breweries and fellow Ossett breweries, although I did notice one pump clip for Butterly Bitter which was branded as Ossett rather than its original brand, Riverhead. I ordered a pint of Yorkshire Blonde and went to the riverside beer garden to enjoy it in the still-pleasant evening sun. The beer was on form as you would expect in one of the company's most popular pubs, and I rated it a pretty respectable NBSS 3.5.
And from there I walked back across the river to the station where I noticed what looked like official graffiti by the railway bridge welcoming visitors to Mirfield. And then it was only a short wait for my train back to Brighouse, having had an enjoyable evening in a neighbouring town, and I realised that I shouldn't leave it so long before my next visit.... 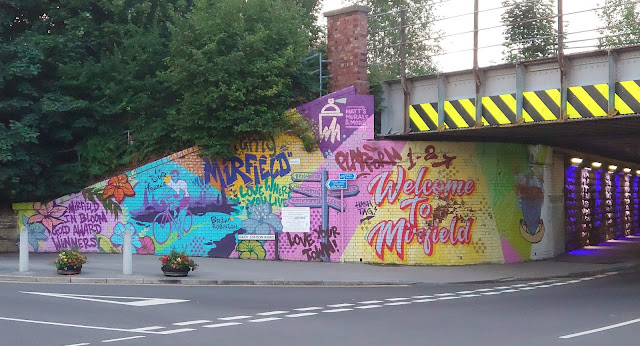