A brand new bar, a familiar bar under new ownership, and a classic city centre local make up the list of places visited as I once again venture across the Pennines.... 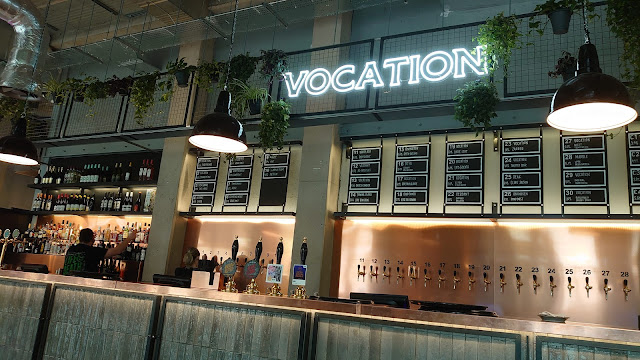 I headed over to Swan Street, looking forward to a quick pint at the Smithfield before the train. However, when I got there the door was locked. I checked my watch, I had forgotten that it doesn't open until 3, and I didn't fancy waiting 10 minutes in the rain. So I wandered over to Shudehill and called in the very traditional Hare and Hounds. In contrast to Fierce, it was heaving, but I managed to get a seat in the room beyond the bar where I was shown to a table occupied by an elderly Irishman, who chatted away very amicably between slurps of Guinness, although I could only really nod politely as I couldn't tell a word he was saying. A pint of Holts bitter was brought to me, at £2.90 easily the cheapest beer of the day after an hour or two on the kegs. It was spot on, a much milder version of the beer that was that bitter when I first came to Manchester in the mid-70's that it would make a grown man cry.
The Hare and Hounds is one of those timeless city centre pubs that provide an escape from the bustle of the world beyond, and is about as far away from a modern bar like Vocation as you could get. But for atmosphere and decent beer it can't be faulted and with an eclectic mix of drinkers it is a real microcosm of the city beyond its doors.
A city I had been glad to re-visit after many months. Even with the rain....
Follow me on twitter: @realalemusic