The Train To Wigan Beer....

March 11, 2020
There is now a direct train service from Brighouse to Wigan, which came in handy for enabling a first-ever visit to the town's beer festival and taking in a few of the local pubs.... 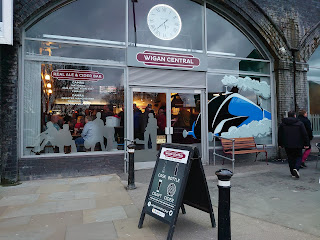 Wigan. Home of the so-called Pie-Eaters*. Home of Uncle Joe's Mint Balls. The location of the former Empress Ballroom, which in the 1970's morphed into Wigan Casino, the spiritual home of Northern Soul. A town whose famous people include George Formby, Stuart Maconie, Andy Gregory, Kay Burley, and Georgie Fame. A traditional rugby league town. A former mining and mill town. The inspiration for George Orwell's The Road to Wigan Pier, in which he highlighted the poor living conditions of Britain's working class. A historic town, with many old buildings, incorporated as a borough following the issue of a Royal Charter by King Henry III in 1246. There are a lot of different sides to Wigan.

The town also has a good number of pubs and several small breweries. And this last weekend, it hosted its annual beer festival, the 33rd, held about a mile out of town at the Robin Park Leisure Centre, in the shadow of the DW Stadium, the home of Wigan Athletic and Wigan Warriors. I had travelled over from Brighouse with Rob and Jay on the 1157 Northern Rail, emerging at Wigan Wallgate station just before half past one. From there it took about 25 minutes to get to the festival, set amongst a retail park with the usual pedestrian-unfriendly signs and layout. Once there, it was quick to get in, get a glass and beer tokens, and get our bearings as we surveyed the large sports hall in which the festival was held. 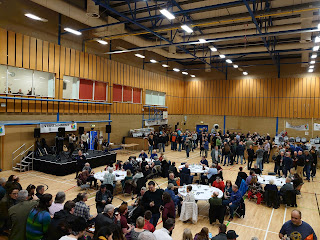 It didn't start well, though. My half of RPM from Wigan Brewhouse was decidedly ho-hum, a pale 3.7% bitter with plenty of hops but not a lot else (NBSS 2). My next choice, a half of SVR Jubilee Ale from Bewdley Brewery was much better, a 4.3% pale with plenty of flavour (NBSS 3). The Festival was busy, although it started to thin out a little as the clock approached 3 and kick-off time across the road for Wigan Athletic v Luton Town approached.

The beers were flowing nicely now. I enjoyed Cloud Fall, a very pleasant 4.5% American Pale (NBSS 3) from new-to-me Dundee-based 71 Brewing - although in the Keg Beer section of the Festival Guide they had shifted operations 66 miles up the road to Aberdeen - and Vandal, an amber, easy-drinking bitter (NBSS 3) from Problem Child Brewing in nearby Parbold. And whilst I wasn't particularly taken with T'Other, an amber 3.5% bitter from Teme Valley (NBSS 2.5), I did enjoy Curioso, a juicy 4.5% pale beer from dependable Somerset brewers, Wild Beer Co, featuring "experimental hops". I rated it NBSS 3. But the particular stars of the festival on the beer front came from a brace of beers on keg from a couple of Spanish brewers, no less: IPA 4, a 4% American IPA from un-Spanish sounding Dougall's, and Hazy Vibes - African Queen & Southern Passion, a 6% hazy juicy double dry-hopped American Pale from Peninsula, my favourite of the lot. 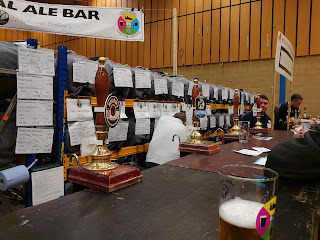 It was a most enjoyable festival. There was a great range of beers from up and down the country and beyond, which, quite frankly, put Manchester 2020 to shame. It seemed like they'd done a good job in holding beers back to the last day, too. I had met some of the guys from Wigan CAMRA at Blackjack Brewery Tap back in 2018, lovely people, and I have to say they did a great job. Even the music - often a total irrelevance, nay irritation, at beer festivals - was spot on. Duo Guess Two went through a host of pop classics and when they started their version of Al Wilson's classic Northern Soul anthem, The Snake, the floor rapidly filled with people dancing like it was 1976 all over again. Achy Breaky Heart prompted an outbreak of line dancing, whilst Sweet Caroline led to a mass singalong. A great event with a superb atmosphere that I hope to do a more justice to and go for longer next time. 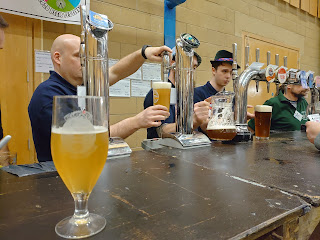 Wigan CAMRA had organised heritage buses to run a shuttle bus between the venue and the town centre. We unfortunately got caught up in the football traffic - a 0-0 draw, if anyone is interested - so it was 25 minutes or so before we got off the bus near to North Western Station, across the road from Wallgate station. Round the corner lurked Wigan Central....

This was opened by the local Prospect Brewery about 5 years ago in a railway arch. And as befits the location, the sign is in style of an old railway station, there is a railway theme inside with signs and various memorabilia. There is even a screen showing live train times from the adjacent Wallgate and North Western stations. There are several hand pumps featuring a number of Prospect beers as well as guests, and I went for a pint of Silver Tally, a 3.7% refreshing pale ale with citrus notes (NBSS 3) brewed by the hosts, who started off in 2007 in Standish before re-locating to a site a few minutes walk away just off  Wallgate. Wigan Central is well worth a visit, great atmosphere.

We headed back up Wallgate, which was getting busier as the Saturday evening crowds descended on the town. We had enough time to try a couple more pubs, so headed to the John Bull Chophouse, situated just off the market place. This is an old building, former cottages, and was bouncing when we walked in. We headed upstairs to the craft beer bar, friendly guy behind the bar, beer OK, good soundtrack, decent vibe.
We had time for another pint, and a couple of minutes away was The Raven, a tastefully-restored early 1900's pub which doesn't betray the fact it was virtually derelict as recently as 2012. It looks like a proper, long-established town centre pub, with plenty of traditional features, friendly, efficient staff, and a great atmosphere. My half of Blond Witch was spot on (NBSS 3), and it was a shame we had to head off for our train. Another excellent pub in a town which warrants further investigation.
We went back to catch our train home. Our positive mood was soon brought to a sudden end. The 1856 back to Leeds via Brighouse had been cancelled. Shortage of drivers or something like that. However there was a train to Victoria due shortly, so we went for that, and as luck would have it, there was a train to Huddersfield on a neighbouring platform. It was the bullet train, so only 29 minutes and we'd be back on Yorkshire soil. So far so good.

Unfortunately, we hadn't allowed for an over-zealous conductor once on board. My ticket was fine, but because the other two's tickets had specified a certain route and with a different train company, he deemed them not valid, and so they had to pay again. Despite our protests he was having none of it. Surely there should be more joined-up thinking in these situations as it is always the customer who is out of profit when the train companies screw up. Yes, they can put in a claim, but that won't cover what they've had to shell out. And that's if they even get processed, I am still waiting for a claim I put in for a delayed train from Hull back in May 2017....

Back to the festival for a minute. One of the beers listed in the programme was Black Jesus, from Great Heck Brewery. This was especially poignant, as news was circulating around last week that the brewery, set up in the village of Great Heck in 2008 by Denzil Vallance, had gone into liquidation. Aside from Black Jesus,a 6.5% a very dark Black IPA with German malt and American hops, they brewed a large range of beers across a wide spectrum, with the best-known probably being Dave a 3.9% dark, quaffable bitter with plenty of roasted malt on the palate. But there were others, ranging from the easy-drinking 4.3% Blonde up to Shankar, a pale 5.9% full-flavoured IPA to even stronger ales such as another IPA, Yakima IPA, 7.4%, deep gold in colour, full and fruity-flavoured. For a time they ran The Bull & Fairhouse pub in the centre of Wakefield, and I enjoyed a pint there on more than one occasion.

And so a sad note on which to finish....

*Wiganers are often referred to as pie-eaters as during the 1926 General Strike the local miners were starved back to work before neighbouring areas and thus had to eat humble pie.