The Coming Of The Ghost Light....

March 25, 2020
Last Friday, March 20th, all pubs, clubs, theatres, cinemas, and other places where people congregate were ordered to close due to the Covid-19 virus whose impact is extending far beyond the disease itself.... 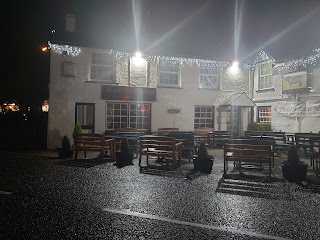 A few people have asked me in the past week or so if I am going to continue to write my blog. I can see where they are coming from; after all, I write about beer and pubs, music and gigs, so in view of recent events the opportunity to enjoy these has been seriously compromised. But I have said to them all that of course I will. Writing isn't an option for me; it's something I need to do, to communicate and express myself and hopefully provide something that people enjoy to read. And in these strange times it is more important than ever to stay in touch. The subject matter may wander around a bit, I just don't know, but the blogs will keep on coming!


Over the last couple of weeks, the Government had put out advice about what to do, and what not to do, some at odds with the other. Overlay that with an overwhelming bombardment of news, advice, conflicting scientific opinion, and every man and his dog putting a spin on it, and it was difficult to know what was the right thing to do. However, as I said last time, there was a growing sense of inevitability about further restrictions being brought in, and people in the pub trade I spoke to last week expected some action to be taken within days. And so last Friday evening, it was duly announced that pubs and other social spaces would close for at least a month from the end of the day.
It certainly hadn't helped that Tim Martin, the bouffant-haired, tub-thumpin', Brexit-lovin' chairman of JD Wetherspoon speaking in a TV interview on Friday claimed that there was no evidence of anyone catching Covid-19 in pubs. This was as crass as it was insensitive, bluster and self-interest undermining the efforts of others in the trade and bodies like CAMRA who had been asking the government for clear guidelines. And then over the weekend, following the closure of pubs, restaurants, etc, hordes descended on coastal towns and National Parks in such numbers that it made a typical Bank Holiday seem like a quiet wet Wednesday in an unseasonably cold May. We do not do ourselves any favours.

This virus is clearly a nasty piece of work, and needs to be dealt with sooner rather than later, and hopefully the latest announcements restricting all but essential reasons for leaving home will slow down its rapid advance. But beyond the disease itself, there are further effects of the recent actions. There is the mental impact on those who are on their own, those who are lonely. Yes, many of them the older ones who visit Wetherspoons in the morning, have a coffee, a pint or two, and then go home by early afternoon, happy with their day's social interaction. The ones that Tim chose not to mention in his interview, the ones who help provide him with his profits, the ones for whom enforced isolation will be difficult. Some will be amongst those who need support, putting a further strain on already-stretched services.
And following on from that is the massive economic impact that will surely have a long-term legacy. The closure of businesses, the support packages for many of those affected, the extra resources required by the NHS and other frontline services has led to a level of spending that makes the Magic Money Tree look like a tiny spindly sapling. It will all need paying for, and the near-certain recession that will follow on in the wake of Covid-19 will almost certainly claim amongst its victims some of our favourite places. How many of our favourite pubs, breweries, venues, coffee shops, restaurants, shops, I could go on, will come out of this in one piece? We simply don't know.

But we have to have hope as we adapt to this new world. It was confusing at first, familiar places unavailable, a feeling of loss. But as the past few days have passed by - quite quickly, actually - I have slipped into a new routine. Work, lunch, walk, work, shopping trip, back home, music, a beer, maybe a glass of wine, food, TV/ reading. Conversations on the phone or Skype or Teams with work colleagues, family, and friends have been appreciated more than ever. I have become more chilled, eaten well, and slept better in the realisation that sometimes there is nothing you can do in a situation other than accept it, just get on with it, and make the best of it. I don't miss the 2 hours driving every day. And the sunny weather, with the birds singing and nature coming back to life as it always does in spring, is a reminder of the simple things in life that will always be there whatever the terrible events going on elsewhere.
I do miss the chatter, the banter, the laughs, the craic, and the atmosphere of the pub. I miss the live music. But it will be back at some point, and that first pint will be wonderful. We just have to be patient.

The title of this blog was inspired by a recent Facebook post by The Lantern in Halifax when they had to close their doors due to the current situation. In it they said that they were leaving a light on - the 'ghost light', following an old theatrical tradition where a light was left on when the place was unoccupied on a temporary basis.