The Calm Before The Storm...

February 12, 2020
The weather this last few days has been pretty challenging to say the least, with areas of the country struck by high winds and heavy rain, resulting in some severe flooding and devastation for many. One of the areas worst affected was the Calder Valley, where once again the heavy rains and the swollen River Calder took hold of communities up and down its length.... 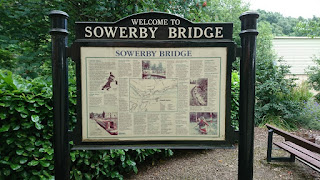 Last Saturday, the weather was kinder than had been forecast. All the previous week we had been warned to expect severe winds and rain, but the sun was out and the day was pleasant as I met a group of friends from Brighouse at Halifax station. We were heading off to Sowerby Bridge, where we were celebrating the birthday of one of the gang, Janette.

The train from Halifax takes 6 minutes, and less than a minute's walk away was the first place on our tour, the Jubilee Refreshment Rooms, housed in a building that was once part of the grand old building that was once Sowerby Bridge Railway Station. It is run by brothers Chris and Andrew Wright, and as we walked in, Andrew was working behind the bar and appeared delighted that there were so many of us! The Jubilee is a pretty timeless sort of place although in fact it has only been open around 10 years. Railway memorabilia, featuring several pictures of the old station in all its glory, adorn the walls, along with breweriana and old photos. There is an unhurried calm about the place, and with no background music or TV screens, it is an ideal spot for conversation and a quiet pint. It attracts a friendly and loyal group of regulars, as well as passing trade from the railway. On the bar,there is a changing selection of 3 hand pumped beers, usually from small, independent Yorkshire breweries such as Elland, Geeves, Saltaire, and Small World. As a station buffet bar, the Jubilee offers tea and coffee, cakes, snacks, and light meals. It is very much at the heart of the community with regular meetings and events such as talks and whisky tastings. It is also no stranger to the limelight, either; it has been on the TV several times, regularly appearing as a location in the crime drama, Happy Valley, which was set in the area. In fact, the only known sighting of a bar stool in the Jubilee was in one of the episodes!

We grabbed our drinks and positioned ourselves near to the fire. We were joined by some more friends who'd caught a later train. We were enjoying the conversation, the beer was good, and so we got another one. We had a very pleasant hour or so there before dropping down into the town.
We walked down Station Road, turned right over County Bridge, and left on to Hollins Mill Lane. Little did we know that 24 hours later the area would be waist-high in floodwater. The Hollins Mill - formerly The Works - was busy when we walked in. If you haven't been in since it was in its former guise you'd be forgiven for not noticing too much difference. A good range of beers, including the likes of Taylors, Oakham, and Phoenix, spread across a bank of hand pumps, and both the ones I tried, the Oakham Citra and Phoenix Arizona, were spot on. It is a large building, set in a former workshop, with high ceilings, but still manages to be friendly and cosy, with quick and attentive service from the team behind the bar.

The next stop was the Puzzle Hall, a few minutes walk further along, about which I wrote recently. Nobody else had been in since it had re-opened, and some had never been before. We took up most of the space in the room beside the bar and enjoyed another couple of decent drinks, the beer I had being in good condition - from Acorn - although not quite as good as the Newby Wyke Kingston Topaz I had enjoyed there on my last visit. Several weeks after re-opening, it is good to see that the Puzzle seems to be settling down nicely. And everyone seemed to enjoy themselves on this visit!
And so, Sunday came along. The storm had finally landed, and the sound of wind and heavy rain lashing against the window kept waking me up. When I got up, it was still dark and gloomy outside, the rain and wind raging incessantly. I checked on TV and social media, the storm had affected the Calder Valley badly, and it seemed we had another bad situation as we'd had on Boxing Day 2015. Yesterday's birthday girl, Janette, and husband Paul, with whom we'd enjoyed a great afternoon in Sowerby Bridge less than 24 hours earlier, posted images and videos of the water running down the hillside through their property in the hills near Brighouse. And up the valley, in Mytholmroyd, Barbary's, which I visited just before Christmas, had been flooded, as had dozens of other properties in the village despite the fact that millions of pounds have been spent on flood defences, not yet completed, to keep the River Calder at bay. They didn't work, and consequently a huge mopping up operation began amidst the swirling anger, frustration, and despair. It was the same up and down the valley; Hebden Bridge had been struck as well, with properties in the town centre affected included Calan's, Drink, and Nightjar, although the Trades Club was open, providing help and support to the community. Parts of Brighouse town centre, Todmorden, Elland, and Sowerby Bridge, where we'd been the day before, were flooded. And in the picturesque Upper Shibden Valley, near Halifax, the historic Shibden Mill Inn had been invaded by the rising waters.

The mop-up began as the waters began to recede. People rallied round, communities pulled together, and the clean-up effort provoked a fantastic response. Two days after the event, Drink was able to re-open tonight, Calan's tomorrow. I called into Millers in Brighouse on my way home tonight. It had had to close on Sunday as the waters rose, and whilst there was no draught beers on, they were serving bottles and cans from the fridge, and food. The cellar had been flooded, as it had in 2015, and whilst it has been cleaned out, all the lines and equipment and any salvageable stock will need to be professionally sterilised and cleaned before they can be used again. Which will be a problem many of the affected pubs will be facing. I wandered around the corner to Ventures, where Ian and Ryan told me that apart from a bit of flooding in the office, they hadn't been affected, and so it was very much business as usual.
It was good to see Miller's open again. Up on the hills, my friends Paul and Janette had lost a few things, but had got cleaned up and were back up and running. Unfortunately for some it may take a lot longer. But to everyone affected by the flooding, both here in the Calder Valley, and beyond, I send you all my heartful best wishes and I hope that the return to normality is as swift and hassle-free as possible....