Barbary's: New Bar With Echoes of The Past....

December 18, 2019
A new bar has just opened in the Upper Calder Valley village of Mytholmroyd, its name recalling an infamous inn in a dubious period in the area's history.... 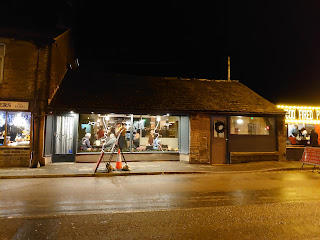 Last Saturday, Northern Rail was all over the place again, so my visit to Mytholmroyd was undertaken by bus via Halifax rather than my initial preference of train from Brighouse. I had primarily come to visit Barbary's, a new bar opened up in the spot previously occupied by Libertine, a bar which had opened and shut several times over the years. I decided to check out the village's two other pubs, the Shoulder of Mutton and the Dusty Miller whilst I was in the area. I hadn't visited either since the Boxing Day floods of 2015, since when there has been a series of flood defence works undertaken, the latest of which have led to many months of temporary traffic lights and frustration.
Ironically, the Calder Valley is at one of its widest points at Mytholmroyd, but it is the site of the confluence of the lively Elphin Brook with the River Calder. The Elphin Brook flows beside the road to the Shoulder of Mutton, a minute or two's walk from the A646 Burnley Road. It is a solid-looking building on a corner, beside a road junction, one arm of which heads up the picturesque valley of Cragg Vale, about which more later. The Shoulder, which at one time had the longest-serving publican in the area, is a pleasant enough village local which serves food and provides Sky Sports for its customers. There are 4 hand pumps on the bar, offering a safe choice of popular beers. I opted for a pint of Saltaire Blonde, and went and sat with it at one of the few empty tables in the pub, and chilled out for a pleasant half-hour.
Dusk was falling as I left the Shoulder and made my way back to the main road. Crossing the bridge over the River Calder, I crossed the main road and approached the Dusty Miller. Another solid-looking pub, it was badly-affected by the floods. Significant changes have been made to the internal layout, with the bar, which used to be on the left as you went in, now occupying a large space slightly to the left opposite where you go in. It really is spacious round the back of the bar; it can't be much smaller than the main space in Calan's Micropub up the road in Hebden Bridge! The beer choice, like the Shoulder of Mutton, was fairly safe, and here I opted for a pint of Wainwright. I was feeling hungry, and the friendly lady behind the bar reeled off all the flavours of Yorkshire Crisps they had. I opted for Henderson's Relish flavour, which seemed to meet with her approval. I grabbed a table and proceeded to enjoy my pint and crisps. Like the Shoulder, the pub was quite busy with Saturday afternoon customers, and there was a nice friendly atmosphere about the place.
Diagonally across the road is Barbary's, which is a new project for Ben Adey of the Alexandra, Lantern, and Glor in Halifax, and his fiancee Ruby. It consists of a low building with a small room with seating as you go in, which leads into another, larger room with further seating. The bar has been moved from the old Libertine days, where it was tucked into a recess on the right, and now faces you as you go in. There is a choice of three beers on cask - Kirkstall Black Band Porter, Wishbone Blonde, and Vocation Pride and Joy when I called in - and six taps that were dispensing Paulaner, a sparkling wine, a wheat beer, Hallet's Dry Cider, and two craft beers, a Kernel Pale Ale, and one from Polly's Brew Co in Mold, North Wales.
I asked Ben where the name came from, and he reminded me that The Barbary was the pub frequented by the notorious Cragg Vale Coiners, an 18th Century gang of counterfeiters. They based their activities at Bell House, the farm on the hills above the valley which was the home of their ringleader, 'King' David Hartley. Learning the skills of iron-working when living in Birmingham, he returned home after getting into trouble, and with his gang of recruits - mainly from other farms in the vicinity - used his skills to counterfeit coins. Genuine coins were clipped, with the shavings collected and cast into fake ones. The authorities eventually got wind of what was happening, and an excise man, William Deighton was sent to investigate. One of the gang betrayed them, Hartley was arrested at an inn in Halifax, and his brother, Isaac, offered £100 to anybody who killed Deighton. The plot was allegedly hatched in the Barbary, which was situated directly opposite the Dusty Miller, and a few weeks later, Deighton was shot dead in Halifax. A reward of £100 was offered by the authorities for information leading to the arrest of the killers, and over 30 people were arrested. 'King' David was subsequently hung in York, bringing with it a close to a murky chapter in the area's history.

Fast-forward to the new bar, and I have to say that I enjoyed my visit. The Wishbone I bought when I went in was spot on, and then I flitted between the Kernel and the Polly's, both of which were excellent. A number of friends popped in whilst I was there, and I also got chatting to a couple of friendly guys at the bar who both lived in the village. It was busy, and seems to have gone down well with the locals. At the moment, it is closed on Mondays and Tuesdays, as Ben fits it in around his other commitments, and with no other staff apart from Ruby. A few tweaks are planned now its been open a few weeks, and so it will close for a week after New Year for these to be done.

Ben was telling me that author Ben Myers, whose excellent novel The Gallows Pole tells the story of the Coiners, who now lives in the village, calls in the bar sometimes for a drink. Ben's wife, Adelle Stripe is also an author who wrote the also excellent Black Teeth and A Brilliant Smile, a novel based on the life of Andrea Dunbar, who wrote the play Rita, Sue, and Bob Too, later made into a successful film. And continuing the literary theme, let's not forget that former Poet Laureate Ted Hughes was born in the village, at 1 Aspinall Street, which is marked by a plaque.

Mytholmroyd is sometimes overlooked in favour of its more famous neighbour, Hebden Bridge, but with plenty of history, literary  connections, and attractive countryside on its doorstep, it is well worth a visit in its own right. And now with Barbary's, it has given us an extra reason to visit....