Duck Weather in The Lakes....

February 19, 2020
A couple of days in the Lake District this week gave me the chance to re-visit a few old favourites.... 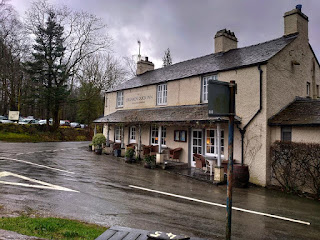 I have always liked to visit the Lakes out of season. The chance to wander around when it's less busy, an opportunity to take in the outstanding scenery, lovely villages, and excellent pubs without the crowds that flock there for so much of the year is an attraction. So when I decided to go for a couple of days this week, even though it was half-term, with the weather forecast not being particularly good in the wake of Storm Denis, I didn't anticipate that it would be too busy.

I was wrong. OK, you could still drive around the area easily enough, provided you carefully negotiated the puddles and streams that seemed to be everywhere, but there did seem to be a whole lot more people than a couple of years ago, when I had also visited in February. And like last time, I had booked to stay at The Sun Hotel in Coniston, and whilst it was quieter later on, when I checked in early evening there was already a healthy crowd of walkers and a cluster of locals in the stone-flagged bar enjoying a teatime drink.
Going to Coniston gives you the option of approaching from the south, by turning off the A590 at Greenodd, and then turning off and heading up the side of Coniston Water, before turning right at Torver. Or, as I did this time, keep straight on the A591, passing Kendal, and approach from the east by going through Windermere and Ambleside. The main road passes close to Staveley, to where I made a detour as it is home to the Beer Hall, the Hawkshead brewery tap. It is situated on a small but busy industrial estate in the heart of the village, even though most of the brewing now takes place at Flookburgh as demand has, for a second time in the brewery's history, necessitated a move and an expansion in brewing capacity.

It was pretty busy when I got there, with most of the tables occupied. I ordered a half of the Table Beer, a full-flavoured pale ale weighing in at a mere 2.8% ABV, which I rated a 3.5 on the NBSS scale. Some of the table beers around these days really are very good, and Hawkshead's is up there with the best of them. I headed off to one of the seats by the window and scrolled through my phone as I enjoyed my drink. I decided to go for another half, and I spotted a familiar figure at the bar. It was Nick Briggs, from two of Huddersfield's finest, Mallinsons and Briggs' Signature Ales. We had a natter and it turned out he was in the Lakes for a few days' holiday with his wife. Small world!

I got checked in at The Sun, a quick change for me, a quick charge for the phone, and I was back down in the busy bar in no time. I ordered a pint of Hawkshead Bitter, which was not too bitter, but very refreshing, and I would reckon it was a top-end NBSS 3. Despite that, I moved on to the Cumbrian Legendary Loweswater Gold, always a favourite here, a delicious 4.3% fruity ale with a bitter finish, which was even better, I rated it NBSS 3.5. I was getting hungry, so I decided to walk down into the village to get some food. First stop was the Black Bull, over the other side of the stream, the home of the award-winning Coniston Brewery. Bluebird Bitter is named after the jet-engined hydroplane in which Donald Campbell set 7 world water speed records before fatally crashing attempting an 8th in Coniston Water in 1967. It was the Supreme Champion Beer at the 1998 CAMRA Great British Beer Festival, and the walls of the pub feature many reminders of both the vessel and the beer. I ordered a pint of Bluebird which, to be fair, is still a good bitter, well-balanced with fruity Challenger hops and an underlying biscuity malt character. On the night, I gave it a 3, but to be honest, food was what I had come for, and I have to say that the haddock and chips I ordered were served pretty quickly and were up there with the best from any chippie.
The Black Bull is always popular, ideally situated on a junction in the heart of the village. Despite being run by the same family and with some of the staff having worked there for years, it does lack a bit of soul. It isn't often that you see any locals in there, and the bar is a place where transactions but not conversations take place. The same cannot be said about the place across the road, The Yewdale Hotel. Newly-refurbished and under new management, the bar was a convivial hub with groups of people sat or stood, but not to the detriment of anyone wanting to get served. Conversations were struck, many about football, as at least three of us were watching the Chelsea - Man United match on our phones. Elsewhere couples and families were sat at the tables, some having a drink, some having a meal. The friendly lad behind the bar asked me if I was a member of CAMRA, which got me 40p discount off my Loweswater Gold. Sadly, despite being 50p a pint cheaper than the Sun, the quality wasn't quite as good, but that was the only disappointment on a most pleasant visit.

Having had breakfast and checked out of The Sun in the morning, I went for a wander down to the lake. It was raining, and the cold wind cut through to the bones. A coffee at the busier-than-usual Bluebird Cafe by the jetties helped a little, but by the time I got back to the hotel and retrieved the car, I was pretty cold and wet. Heating cranked up, I decided to pay a visit to the Drunken Duck at Barngates where I hadn't been for a few years.

The road back towards Ambleside was even wetter than yesterday, and taking the turn off at Clappersgate to head up to Barngates it was wetter still, with streams flowing off the hillside at will, forming large, ever-increasing small lakes. The Drunken Duck is signposted half a mile up off the road to Hawkshead, and stands proudly at a crossroads, with - when weather permits - outstanding views towards Ambleside and the fells beyond. It has been home to the Barngates Brewery since 1997 which, apart from the Drunken Duck, now supplies another 150-plus outlets. The attractive pub is also a destination for lovers of good food, and the wet weather meant it was a very busy Tuesday lunchtime with most tables taken. Still pretty full from a hearty breakfast, I ordered a sandwich, which arrived doorstep-size filled with Lancashire cheese and tomato chutney. I washed it down with a pint of 4% Brathay Gold, a delicious fruity bitter from the brewery round the back. This was another really good beer, another NBSS 3.5, and maintained the high quality of the beer I tried on this trip.

If only the weather had been as good.... 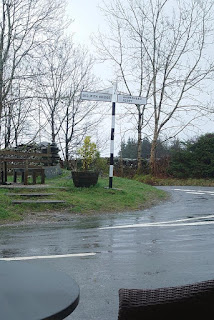