News And Views Amidst The Blues....

January 22, 2020
For many people, January is a month when resolutions are made, diets started, gym memberships taken out. Which means the pub can get left out of things. But there is no reason to completely abandon them.... 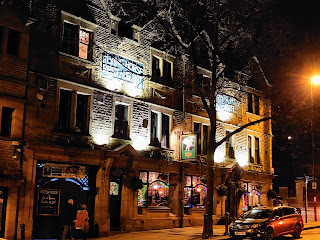 January is probably the most miserable month in the calendar. Christmas gone, back at work, long dark days, bills to pay. Indeed, as I write this on the 20th of the month, it is the so-called Blue Monday, as apparently analysis been conducted which shows that this is actually the most depressing day in the calendar. It tends to be on the 3rd Monday of January, but can sometimes be a week earlier or later. And despite that, some people decide to make themselves even more miserable by depriving themselves of things that they love! Chocolate, a favourite food, alcohol, maybe. But if you decide to give up alcohol for a month, there is no reason to completely abandon the pub. Staff still need to be paid, their bills still keep coming in, and so the non-alcoholic option, a meal out, or a catch-up with friends, for example, can keep the pub ticking over. In the background, despite a slight improvement in the figures, a recent report has highlighted that an average of 14 pubs across the country still close every week, meaning over 700 a year, with January taking a hefty toll.

And as many pubs are still the social hub, the focal point of their community, they need to be supported all year round, not just over the Christmas and New Year period, or else it can be a case of use it or lose it. The place where you also enjoy a drink on a balmy summer evening, a place to catch up with what's going on with friends throughout the year. But pubs need to do their bit too. Some pubs are badly run for a myriad of reasons - poor quality beer and service, lack of experience, bad management, over-ambition, laziness, pubco short-sightedness, I could go on. Of course bad luck can also play a part, but it is these pubs that will often and sometimes inevitably lose out once the celebrations are over. One example of a pub that makes it work all year round is the nearest pub to where I live, the Dusty Miller at Hove Edge, a few minutes walk from home. It is thriving and is very much at the heart of what is going in the village. But when I first moved to the area nearly 20 years ago it was badly-run and not the sort of place I or many people would choose to go in. But since landlord Rob Wilde took over a number of years ago, the Dusty has been an excellent community local, with friendly and welcoming staff, consistent beer quality, popular and good value food, the pub is spotless, and there are always plenty of events like quiz nights going on. But all of this demands a lot of work and focus. And it is easier for pubs that constantly work at what they do to command that support and get by in generally quieter times of the year like January. 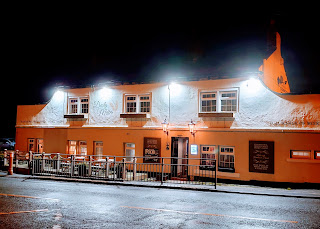 January, as you might imagine, is not a month when I desert the pub. The fact that I have my birthday in the month means that I have to have at least one day when I am out, anyway! And on several forays on other days there has been some excellent beer around too. I had a pint of Jarl, from Fyne Ales, one evening last week at the Buffet Bar in Stalybridge. The quality was excellent, easily the best pint of cask of this fledgling year. It is a superb beer anyway, but it was in tip-top condition that evening, definitely a 4 on the NBSS scoring system. My mate was on the Oakham Citra, which he also rated highly. But other good 'uns have been about too. I had an excellent pint of Rocketman from Arbor at the Victorian Craft Beer Cafe in Halifax. This superb 6% IPA with Mosaic and Citra hops was on fine form. And then I had a few excellent halves of a dark beer from a brewery I had not heard of before at The Grayston Unity in Halifax this last weekend. This was Even Drop from the Saints Row brewery in Darlington, a delicious 5.5% stout infused with Bourbon, vanilla, and cocoa nibs. 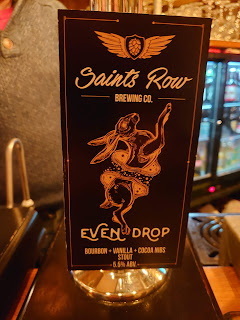 Meanwhile, at the Grayston, I am honoured to have been asked to curate the beers for their first-ever city takeover next month when a selection of different breweries from in and around that excellent beer city that is Newcastle will be supplying a range of ales. Owner Michael Ainsworth is, like me, a big fan of the beers from this part of the world and came up with and mentioned the idea to me a week or two ago. The event, which is a different take on the regular tap takeovers when a single brewery supplies a range of beers, is scheduled to run at the Grayston and its sister bar, The Meandering Bear, from 6th to 12th February. Around 17 beers across cask and keg will be available of which I am looking forward to sampling one or two. More to follow on this next time around.

A bigger festival, though,takes place this weekend when the annual Manchester Beer and Cider Festival opens its doors at Manchester Central. Organised by the 9 CAMRA branches from across Great Manchester, it is taking place from Thursday 23rd to Saturday 25th January, the festival will feature over 750 beers from across the country and from overseas across around 25 bars. Over 400 of these will be cask-conditioned, and building on last year, there will be an increasing number served from wooden casks on a dedicated bar. And following the success of last year's talk, former editor Good Beer Guide, Roger Protz, will again be hosting a talk and tasting featuring beers from the cask. With further talks scheduled to take place, there is also an expanded cider and perry offer, and if you fancy a drop of mead, or a fruit wine, or even a gin, they will be all be available.
Sadly one brewery that won't be featuring at the Manchester Beer Festival this year is the Summer Wine Brewery, as news broke a few days ago the Honley-based outfit have closed down. I don't know what happened there but despite having a pleasant tap room at the brewery they were conspicuous in their absence in their local area in recent years, although their beers had been spotted in Edinburgh recently. They also supplied the house beer to the Pilcrow in Manchester, and I did wonder if, with that place due to be closed down as a pub and its use being re-designated as part of plans to re-develop the Sadler's Yard area, it had had something to do with its demise.

And it just serves a reminder that for some, January is the most miserable month of the year...