November 10, 2019
A return to Leeds, and a most enjoyable evening in and around Kirkstall Road.... 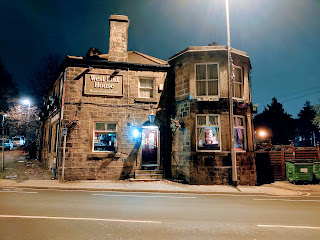 The heavily-bandaged, bloodstained guy and the dodgy-looking bloke with the black cloak and dubious teeth were deep in conversation as I squeezed past them on my way to the bar. There was a strange, reddish glow as evil-looking orange heads with no eyes and crazy mouths stared out from all corners of the room. Cobwebs hung down  from the ceiling, spun by huge, black spiders, as a couple of zombies looked on.

I was in the West End House in Kirkstall, Leeds, where the Halloween festivities were in full flow.

It was my first-ever visit to the pub which was, years ago when I lived up the road in Headingley, a bastion of Whitbread and therefore not a place to expect any real ale. So, even though I had noticed it had been in the Good Beer Guide a few times in recent years, it wasn't a place that I had ever visited before. But as I was going to a gig at the Brudenell and I needed some food somewhere, I decided it would be an opportunity to pay a visit.

My first thoughts were to go and get some tea at the Kirkstall Bridge Inn as I had done several times, knowing the food was OK and the service pretty quick. I got parked up in the large car park and went in. However, it was that busy that I soon abandoned that plan. Seating was hard to come by, and I ended up being relegated to a small room behind the bar. The beer - I'd got a half of Mosaic Pale from Kirkstall - was spot on, but I decided to move on as I couldn't see me being able to get any food for some considerable time.
I finished my drink and walked the few minutes back to Kirkstall Road, crossed over at the lights, and turned left. The West End House was a short walk away, a solid-looking building with subdued lighting that didn't announce itself. There was a girl on the phone as I climbed the few steps into the pub. The bar was straight ahead, festooned with all things Halloween. There were three beers on hand pump, a couple serving Old Rosie Cider, and one not in use. Beers on offer were Hobgoblin (natch), Knowle Spring Blonde, and Witch Otter from the increasingly ubiquitous Otter Brewery. I opted for the Otter, a slightly malty, slightly fruity golden/amber ale, which was pleasant enough. The West End House was quite busy, with a curious mix of Halloween-celebrators, couples out for a quiet drink, and guys still in their work clobber. It seemed a nice enough place, but to get a better picture of what it's like, it will probably be best to visit when it isn't decked out in the trappings of Halloween!
I still needed to get some food, but I decided to grab a half at the Cardigan Arms, an old favourite, and have a think about it. There was no parking immediately by the pub, but this turned out to be a positive as I ended up parking a short distance away, outside an Indian restaurant called the Sheesh Mahal. A plan was formulated: a quick half at the Cardigan, followed by a curry, and then up to the Brudenell to see Warmduscher.

I walked back the short distance to the Cardigan Arms where the Halloween celebrations were in full swing. The large, street-corner former Tetleys pub, now owned by Kirkstall Brewery, was very busy, and it was a fight to get through to the bar to get served. I eventually made it, and ordered a half of the Kirkstall Pale Ale, but despite the pub having several different rooms, there was nowhere available for a sit down. There was a great atmosphere, though, with many of the punters in traditional Halloween gear.
I was conscious of the time, needing to eat and then having a gig to go to, so I drank up fairly quickly and found a space on the bar to leave my empty glass. It was a couple of minutes walk to the Sheesh Mahal, and encouragingly, there were plenty of occupied tables. I was ushered quickly and politely to a table, and a few minutes later, I ordered Chicken Keema Garlic with pilau rice. It didn't take long for the food to arrive. It was absolutely delicious, the best curry I'd had in ages, and good value for money too. I shall definitely call in again!

I drove up to the Brudenell, and got there to hear the final couple of tracks from the support band, and following a quick can of Magic Rock's Salty Kiss, I headed to the front by the stage to get some photos of the band. The room started to fill up, and a few minutes later, Warmduscher, in sympathetic Halloween attire, emerged on to the stage to loud cheers. 'Warmduscher' in German means literally 'hot showerer' and is used as an insult to describe someone who is weak or cowardly, someone who doesn't like to step out of their comfort zone. The band are from South London and Uncut magazine described their latest album - the brilliantly-named Tainted Lunch - as being 'a mutant strain of noisy funk, hip-hop, subversive art-punk, and dirty disco'. And I can't do any better than that. No less a name than Iggy Pop guests on the album, and their music is regularly played on Marc Riley's 6 Music Show, so they have some pretty influential supporters. With echoes of the Red Hot Chilli Peppers, Captain Beefheart, and Parliament, you are served up with great riffs, sinuous bass lines, and pulsating rhythms, before you know it your feet are moving and your body shaking. Warmduscher are a lot of fun, and if you get the chance I would urge you to see them. They played their most recent singles, Midnight Dipper and Disco Peanuts to great applause, and at the end of the gig, I bought a copy of the album at the end of the show, and listened to it on the drive back home.

And with three good pubs, some excellent beer, a wonderful curry, and a most entertaining gig, you don't get many evenings better than that....
Follow me on twitter: @realalemusic