June 22, 2018
A traditional Leeds pub still displaying its amazing heritage, plus an excellent gig, and a few other bits and pieces....

The Cardigan Arms is a huge, solid-looking building situated on the Kirkstall Road in the Leeds suburb of Burley. I mentioned last time that I hadn't been since it was taken over by Kirkstall Brewery last year, but I decided to put that right when I was visiting Leeds last weekend. It was originally owned by Tetleys and I was a regular visitor when I lived in Leeds back in the early 1980's. It was a rambling old place, with several rooms, lots of wood panelling, etched glass windows, and huge mirrors. It was always busy, a friendly local with an eclectic mix of people drawn by the superb beer from the brewery a mile or two down the road.

But, more of that in a minute. The night before I visited the Cardigan, I had been in Halifax.

I was off to see Richard Dawson at the Minster, but prior to that I went for a couple of pints at the Grayston Unity, whose owner, Michael Ainsworth, had organised the gig with the team at Doghouse Promotions. I joined my brother and sister-in-law for a couple of pints, where I was drinking a very nice hazy Pale from a brewery called Anthology who, I have to admit, had never heard of. And it made for a very pleasant, easy-drinking pint, which seemed to going down very well with some of the other customers too. But more of Anthology in a minute.

After another pint and at a bite to eat at the Square Chapel, I made my way to the Minster, and managed to get a seat just to the right of the stage which gave me a pretty good albeit sideways view. Guitarist Jim Ghedi was working through his set of spacey and atmospheric largely instrumental alt-folk which was a splendid fit with the acoustics of the medieval church. Finger pickin' good, in fact. Jim comes from Sheffield, and is worth checking out, his latest album is 'A Hymn for an Ancient Land'.

Richard Dawson joined us a few minutes later, after Michael had done his introduction. I had seen the Geordie musician at the Trades Club in Hebden Bridge a few months earlier when he played tracks from his last album, 'Peasant'. His music is folk-based but then veers off in many, often bleak, but compelling, directions. Here, the acoustics were ideally suited to his strong voice, as he sang unaccompanied at times, but would then rock it up, even referencing the riff from Black Sabbath's 'Iron Man' at one point. As well as tracks from 'Peasant', he performed a few other bits and pieces, including 'The Vile Stuff', a rambling but mesmerising stream of consciousness tour-de-force which actually mentions Halifax in the lyrics. It was a superb performance, even better than the one a few months ago.

After the gig had finished, and a quick word of thanks to Richard and his band, I went back to the Grayston for a pint. The Anthology Pale had not surprisingly run off, so I opted for a Marble Pint before heading off to get the last bus home.

Meanwhile, back over to Leeds and The Cardigan Arms. I was on my way to my grandson's birthday party, but as I was over that way I decided to pay a visit. I parked up by the side of this huge street corner pub, and headed inside.

It was probably 30 years since I had last visited, back in the days when it was an archetypal Leeds Tetley pub. I lived not too far away, in Headingley, for a few years, and then, a few years later, an old girlfriend of mine had a flat in Burley, so I used to call in the Cardigan quite regularly. The beer was always good, and the pub was always welcoming.

Amazingly, it looked very much like it did back then, a spectacular multi-roomed gem, with much wood-panelling, etched glass, fireplaces, and huge mirrors. Absolutely stunning, so I had to have a wander around and get a few pictures.

I returned to the bar to pick up my Kirkstall Pale and got chatting to the barman. It turned out his name was Liam and as we were chatting he mentioned that he had set up his own brewery back in March. 'What do you call it?', I asked. 'Anthology', he said. Now that was a coincidence! We had a good natter, I said I had really enjoyed the Pale I had drunk the previous evening. Anthology have only done about 7 brews so far, but talking to Liam there are plans for several different beers in his range. And based on my one experience of drinking two or three pints of one of Liam's beers, Anthology are a more than worthy addition to the current group of new breweries coming out of Leeds at the moment like Eyes and Nomadic snapping at the more experienced heels of the likes of Kirkstall and Northern Monk.

I enjoyed my visit to the Cardigan Arms. It was a bit of a trip down Memory Lane, as so much of it was as I remembered it from 30 years ago. Under its new owners, Kirkstall - whose beers are brewed just over a mile away down the Kirkstall Road in a former dairy - the pub has got an owner who is sympathetic and supportive to the heritage of one of Leeds' most iconic pubs.... 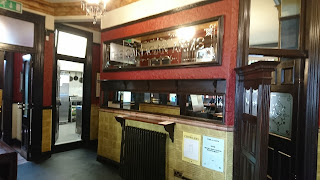 *************
Mentioning Tetleys, it was announced recently that this once great name is returning to its Leeds roots and some beers are being brewed under the old name by Leeds Brewery. It will be interesting to see how they turn out.

Meanwhile, this week there have been worries about a shortage of food-grade carbon dioxide. Traditionally this is a time when the main production plants shut down so planned maintenance can take place. But with the World Cup and good weather, supply problems are threatening to impact on those beers that require it. At the moment it seems like John Smiths Smooth(what a shame!) is affected, but other beers requiring carbonation or canning could also be hit. Watch this space.

This next weekend the Buffet Bar at Stalybridge is holding its Summer Beer Festival, starting on Friday, 29th June. This weekend also marks the start of the Manchester Beer Week, so I would expect there will be some bits about it in a forthcoming blog!

And finally, the Star in Huddersfield is holding its Summer Beer Festival from the 4th to the 8th of July in the outside marquee. Always worth a visit for what I am sure will once again be a chance to try out some eclectic beers....