November 19, 2019
A meet-up with friends from out of town last weekend made me think that there has been no recent actual suggested tour around the pubs and bars of Halifax town centre. Here's the route we walked for starters.... 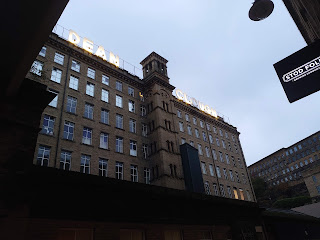 It had taken ages to come up with a date that worked for all of us, but we had finally settled on last Saturday. Which is why, just after 1pm, I was sat on a barstool in the Three Pigeons awaiting the arrival of whom I call Alex but known to the online community simply as Quosh and Chris, who had last appeared in this blog when we visited the currently-closed Donkeystones Brewery Tap with the legendary Simon Everitt, aka BRAPA. Their train from Huddersfield was running slightly late, but I hadn't been in that long when the lads arrived. Handshakes were exchanged, and Chris even came bearing gifts: Having read my recent blog about visiting Bromley, he had dug out a book he had at home called The Bromley Boys, which chronicles a season following Bromley FC in the days when they were struggling in the lower leagues. Cheers, mate!
From there it was a short walk to the Square Chapel bar, where we had a swift half of Donkeystones Coffee Stout(which was very nice, but trumped this weekend when I had an excellent Orange Sour from Pomona Island!), with the striking ceiling design the main topic of conversation, after which we went into the Piece Hall. Chris had not been before, so he was snapping busily as we walked to Loafers, where we enjoyed its heady mix of vinyl, coffee, and beers from Magic Rock. And they had the new Nick Cave album in stock, too, so I got myself a copy!
We walked through the Piece Hall and went out via the top entrance, and up on to Wesgate, where we turned left and called in at the Meandering Bear. This was a new place for both of my companions, and we enjoyed the chilled out, early Saturday afternoon atmosphere. A few familiar faces were present behind the bar, including owner Michael. Alex remarked that I seemed to know everyone! I took the lads over to see the mural featuring Kieron Higgins' poem of the story of the Meandering Bear. We had a very pleasant chilled out half hour in here, but it was time to move on....
We walked on Westgate past the splendour of the town's Victorian market hall, past the wonderful Duke of Wellington's Regiment memorial statue, past the bus station, and finally on to the Stod Fold bar at the entrance to the industrial marvel that is Dean Clough. Whilst I think sometimes the brewery's beers hold a bit back for those of us who are hop monsters, they certainly know how to run a good, friendly bar, and it went down well with the visitors.

From there, we moved on to The Grayston Unity, around 10 minutes walk away, bang opposite the splendid Victorian Town Hall. The bar, which opened what seems a lifetime ago, but only back in May 2016, was pretty busy with the usual eclectic mix of people, and we had another pleasant stop over here. The fact that with a capacity of just 18 this is the smallest licensed music venue in the country never fails to impress visitors to the town. You may have noticed that I haven't really mentioned many particular beers; to be honest, we were that busy talking that I have forgotten what we were drinking!

We bade our farewells to the Grayston, and just over 5 minutes later, we were at the Victorian Craft Beer Cafe, the bar that started off the transformation of the Halifax beer scene a few years ago. As usual, there was an excellent selection of beers on both cask and tap. It was busy, and as usual there were plenty of people I knew on both sides of the bar. The Victorian went down well with both Alex and Chris, but after a pretty quick half, it was time to move on.

A few minutes walk away, we arrived at the Alexandra, but for the first time since we had met at the Three Pigeons, we sat down, grabbing some of the comfy seats situated by the window and enjoying our beers in comfort. Next door beckoned, and we landed at the Lantern, which was heaving as there was a set by former Inspiral Carpets' singer Tom Hingley in the downstairs bar, which sounded pretty good, so we hung around for a few songs and enjoyed our halves.

It was time for our final port of call, which was København, and here we opted for pints after an afternoon of restraint. The bar was fairly busy, as the time had moved on to Saturday evening. We reflected on what had been a most enjoyable afternoon with good beer and conversation, and after a short while, we walked down to the station where I bade the lads farewell as they needed to get their train back across the Pennines. 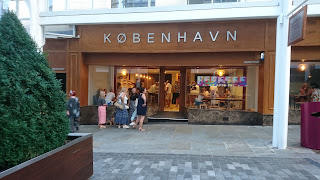 And as they departed, I thought that had we had more time we could have visited more places. Other than the Three Pigeons and the Stod Fold it was all pretty close together. To make it more comprehensive you could start at the Cross Keys at Siddal, then go down to the Shears at Paris Gates and then go to the Three Pigeons. Likewise, you could move on to the Ring O'Bells by Halifax Minster after the Pigeons before going to the Square Chapel.

But that's for another time....