October 30, 2019
I headed out on the Tyne and Wear Metro last week to check out a few of the new micro pubs that are springing up in and around some of the stations .... 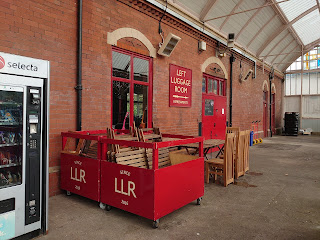 A few months ago on my last trip to see my family in the North East I wrote a blog about my trip to a micro pub in Whitley Bay. Someone posted a comment advising that there was one at Tynemouth and I already knew about one called the Left Luggage Room, so I was anticipating a good day out in North Tyneside when I set out to visit all 3 last Monday. The North East has long been one of the best areas for micros, with the Rat Race at Hartlepool station being the second one in the country to open. And with the likes of the Town Mouse, Mean Eyed Cat, Split Chimp, Box Social, and Beer Street in Newcastle all doing well, with more across the region, it is clear that the area understands what it takes to run a popular and successful operation. And so my little jaunt didn't disappoint.

I left Newcastle via the Metro from Monument at the top of Grey Street, taking the line that heads out to the coast and back to St James in the City Centre. The line runs through places like Jesmond, Benton, and Shiremoor, and after a short section running through countryside, we reached Monkseaton, my first stopping point. As the Metro includes stretches on former railway lines, it features a number of old railway stations. Monkseaton is one of these and within the old left luggage room is the eponymous micro pub. It was hard to tell if the place was open as you approached, but a gentle pull on the door confirmed it was, and so I and another guy who had alighted here wandered in.
It is quite a big room, with the bar on the left, and there is a jumble of seating, a stove, with assorted ephemera including a Play Me guitar hanging on the walls. Fairy lights hang from a fairly high ceiling. The bar front is stuffed with assorted old suitcases and on the bar is a bank of 6 hand pumps, which on this visit was mainly given over to local beers, but with a couple from Thornbridge. 4 fonts are given over to craft ales, and there are cans in the fridge. Behind the bar are shelves containing wines and spirits which go up so high that a ladder is required to reach the upper shelves.
Our host behind the bar was Johnny, a welcoming, chatty bloke who drew you into the life of the bar. Tales of characters you probably won't meet, beers you may or may not drink, the guitar he brought in so people could play. Several halves were tried - Northern Alchemy Farmhouse Session IPA (NBSS 3.5) was the best in my opinion, although the stout from Two by Two was an enjoyable, easy drinking 5.2% stout (NBSS 3). I also tried a Two by Two LLR Bitter which was very gentle for a bitter (NBSS 2.5). Alex the owner kept popping in, but then went off to Whitley Bay in search of envelopes. Every now and again someone would come in for a drink, Johnny would greet them as friends. I and the guy who had come in at the same time - he was from Hammersmith - got chatting about pubs and beers, but eventually, after another unplanned half, I went out to the platform to await the next Metro to Whitley Bay. I'd had an excellent hour in the Left Luggage Room, and look forward to calling in again!

A few minutes later, the Metro took me the one stop to Whitley Bay. Unlike last time, I knew my way to the Dog and Rabbit. A few people were in, either at the bar or dotted around the comfortable bar. Karen, the lady behind the bar, poured me a half of Citra, Simcoe, Ekuanot IPA, from Wallsend brewers Two by Two. This was a magnificent, hoppy, fruity beast of a beer weighing in at 6%, and one of my beers of the year so far (NBSS 4). Karen was very welcoming and, like Johnny, drew you into the local life and characters. A face I recognised came in and said hello. It was Alex from the Left Luggage Room, clutching his recently-bought envelopes. I tried a half of the Centennial/Cascade, brewed on the premises (NBSS 3), and I stuck my head around the door so I could get a picture of the brewery.
I had more business to attend to in Whitley Bay, as I had realised there was another pub in the Good Beer Guide, another micro pub. So when in Rome.... Or Whitley Bay, to be precise. Before I left, I went for another half of the Two by Two which reaffirmed my first impressions. A wonderful beer. And just like last time I visited, the Dog and Rabbit didn't disappoint. I'll be back....
There was another micro to visit in Whitley Bay. This turned out to be a few minutes walk away from the Dog and Rabbit on the way to the seafront, and is the Storm Cellar. This is run by Chester-le-Street-based brewers Black Storm, and it was my first introduction to their beers. The bar is classed as a bottle shop and tasting room, and there were several people enjoying a late afternoon drink when I walked in. There were 2 beers on, both in excess of 5%. I tried them both, the IPA pleasant but forgettable (NBSS 2.5), whilst the American-hopped Hurricane (NBSS 3) was pretty decent. The soundtrack was unashamedly classic rock, but suited my mood, and all in all, I liked Storm Cellar. The brewery, who until moving into their new home, were cuckoo-brewing at Hadrian and Border, have another micro in Newcastle, called Drop Everything and Drink, and also operate a couple of Beer Box craft ale-focussed retail outlets, one in Newcastle, the other, somewhat surprisingly, at the Hatch retail and leisure space on Oxford Road in Manchester.
I had a wander down to the seafront for a look around. After a breezy interlude there,  I headed back to the Metro as I had one more micro to visit, in Tynemouth, as referred to earlier. This is the Platform 2 Craft Ale Bar, situated in the former station waiting room on, well, Platform 2. This is another excellent station bar, which was playing some great, free music from an old jukebox. A few people were sat around a reasonable-sized room, enjoying an early evening drink. And they had some superb beer to pick from, based on the two that I tried. From the 4 beers on hand pump, I selected Anarchy Blonde Star (NBSS 3), whilst for my choice on tap, I went for an Almasty Session IPA, which was even better (NBSS 3.5). Whilst the staff were more reserved here than at the places I'd been to earlier, they were pleasant and polite, and with some excellent beer and a great atmosphere, the Platform 2 was another top-notch spot.
I finished my beer and headed out on to the platform to wait for my Metro back towards Newcastle. It had been a great little tour, and it is rare when you visit a few different places, particularly when they are nearly all new to you, you can honestly say that you would happily go back to every one of them. 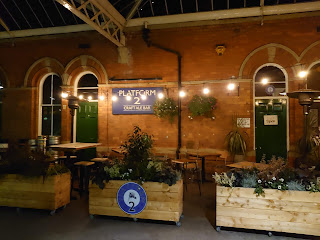