October 04, 2019
The latest sensations from South London's Speedy Wunderground label were in Manchester the other night, so I went along to check them out.... 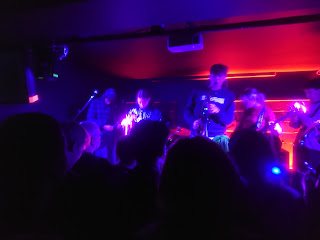 One of the key tracks of the year is Sunglasses, a 9-minute epic from London-based Black Country, New Road. Starting with some fuzzy guitar, it leads in to simple strumming, reminiscent of early Radiohead. The drums kick in. The vocals, half-sung, half spoken in a rich, almost theatrical style, begin. In comes the saxophone as the track builds. And builds. It begins to veer off in different directions, chords clashing. The rhythm intensifies, the sax goes wild, the vocals shouting and screaming. It crashes down. And then builds again, starting quietly, but with more intensity. And then "I AM INVINCIBLE IN THESE SUNGLASSES!" shouts the voice. The beat quickens, intensifies, the sax screams, the riff builds, before finally all coming crashing to a close. This remarkable track was what made me decide I just had to see Black Country, New Road as soon as possible.

I caught them in Manchester, at Yes, a new venue to me, but one which opened in November 2018 in an old auction house on Charles Street, just off Oxford Road, next door to the Lass O'Gowrie. It opened as a dedicated music venue, very welcome in a city that has sadly lost such places like The Ruby Lounge, Dry Bar, and Sound Control - where I first saw The War on Drugs - in recent times. Yes has a 250-capacity venue upstairs, a basement venue downstairs, with a bar and eatery majoring on chicken and pizza slices on the ground floor, and an upstairs roof terrace.

BCNR were on in the sold-out basement, a small-ish space with a bar in one corner. It was already pretty full when I went down, with what I would say was a younger average-aged audience than most gigs I go to these days. The student effect, I suppose. But frustratingly, some had their rucksacks with them, some were very tall, and some were very tall and had a rucksack, so when you're short like me it can detract from the viewing experience! I somehow got about two-thirds in, got talking to a couple of pleasant lads who are in a band of their own, before getting pushed further forward as the band emerged on stage to raucous applause. 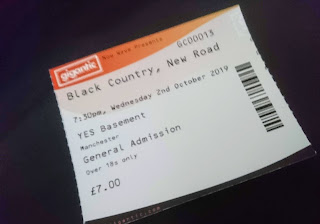 The band, stable-mates of both the highly-acclaimed Black Midi and Squid, are a six-piece, several of them from Cambridge, comprising Charlie on drums, Georgia on violin, Isaac on guitars and vocals, Lewis on saxophone, May on synthesisers, and Tyler on bass. This mix of instruments means they have a rich sonic palette to draw from, and with a shed load of musical influences ranging from jazz, indie, funk, Afro, classical, prog rock through to even folk, plus Isaac's world-weary vocals (which at times recall both Jarvis Cocker and Mark E. Smith) and amazing and eclectic lyrics -"Mother is juicing watermelons on the breakfast island", "I wish all my kids would stop dressing up like Richard Hell". They are unlike any other band I have ever heard. The tracks twist and turn, a thumping beat which has the crowd jumping on the floor can suddenly switch to a quiet, almost pastoral passage. With different chord sequences and tempos, the structure of each tune is more like that of a suite than the conventional verse-chorus-verse-chorus. And most of the way through, it is the fascinating interplay between Lewis's saxophone and Isaac's vocals that runs through the heart of Black Country, New Road, not to take anything away though  from the rest of the band.

The biggest cheer was, inevitably, saved for Sunglasses, which was about the 4th track of the evening. It was even more exciting live, with the crowd leaping up and down, but every piece was well received. Most were well over six minutes long, and when the band left the stage almost an hour after they started, they had treated us to one of the most exciting and exhilarating sets imaginable. We will be hearing a lot more of Black Country, New Road.

And, should they play Yes again, it won't be in the basement.....

And here are the band: