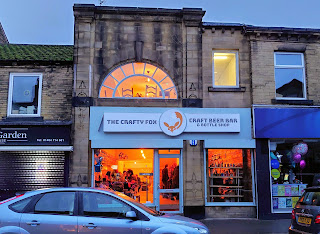 The town of Brighouse is buzzing again, with a new bar giving the town's quality beer and pub lovers another drinking option. The bar in question, the Crafty Fox, opened up a week or two ago in the heart of the town on Commercial Street, and thus far has been pulling in the crowds, some inquisitive and going for a nosey, others starting to go back regularly as they like what they see.

The bar is located in a former Polish supermarket, and is run by Baz and Michelle, aided behind the bar by Baz's daughter, Georgia, amongst others, and immediately you walk in you are made to feel welcome. Baz, a former purchasing manager, had a brief spell working across town at Ventures, but other than that, it is a brand new chapter for the team. 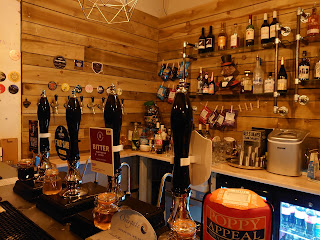 And what about the beer on offer? Well, when I have called in, there have been some good ones available. Four hand pumps serve beers from the likes of Wilde Child, Kirkstall, and, on my last visit, Marble, all of which have been on good form. On tap, there is further choice, with Wilde Child's wonderful driver-friendly Enfant Terrible on whenever I have called in, with a varying choice of several more beers, plus a cider and Veltins for the quality lager drinker. All are displayed on a large chalkboard opposite the bar. 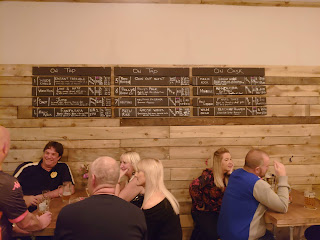 Ostensibly, the Crafty Fox is a micro pub, and at first glance, with its tinted windows it is hard to dispute that and see what lies within, during the day at any rate. At night, a lovely warm orange glow emanates through the same windows, reflecting the over-riding friendliness of the place, which reveals the fact that the bar goes back a long way from the street, and not just that, it also has a comfortably furnished upstairs room too. With plenty of seating, including a large leather settee near the door, and nice touches like a vase of flowers on each table, it has a homely feel.

Yes, it is still work in progress, as Baz admits, but it is a welcoming place, and is a great addition to a town with a number of decent options including the Market Tavern, the Commercial/Railway, Miller's, and Ventures. So next time you are in the town, the Crafty Fox is well worth checking out. They open every day except Tuesday, but check on their Facebook or twitter for specific times as with it being so new times may vary as they work out what schedules work best for them and customers.

Staying local, it was the annual charity Festivale Beer Festival the other weekend at the Bailiffe Bridge Community Centre. This is organised by the club community with beers curated by former local landlord Mark Feasey, who once again came up with a number of new beers not seen in the area before. I had a most enjoyable time when I visited on the Friday night, and particularly enjoyed the Galaxian from Peerless brewery in Birkenhead and an old favourite, Lemon Dream from Salopian.

A good night was had at Ventures last Saturday when local rock and blues band Blood, Sweat, and Beers played to a large and appreciative audience. There was some good beer on from the likes of Cloudwater, which followed on from some top beer at the Market Tavern earlier in the evening.
And mentioning Millers, I popped in there earlier this evening, where they had a beer called Supernal on, a delicious 4.5% late hopped pale with citra hops, which was very good. This was from S43, which is the latest incarnation of the brewery formerly known as Sonnet 43, and following on from some nice beer from them at the Grayston Unity in Halifax on Saturday, it seems they are a brewery which is starting to now get into more modern styles of beer in both cask and craft formats. This follows on from the appointment of an American brewer, Alex Rattray, at the back end of 2018. S43 are based in Coxhoe, County Durham, which ironically I drove through last weekend, although on my subsequent stay in the North East over the following couple of days, I didn't come across any of their beers in any of the places I went!

About which I may well tell you next time....

The Crafty Fox is at 44, Commercial Street, Brighouse, HD6 1AQ. They are on Facebook and they can be found on twitter @BrighouseFox