July 14, 2019
Last Thursday, England surged into the cricket World Cup final by blowing Australia away in an awesome display, and set up an intriguing contest with underdogs New Zealand in what was to be the first major cricket match to be shown on free-to-air television in this country since Sky bought up the TV rights way back in 2005.
I mention this because the cricket was very much in my thoughts when I visited Leeds on Saturday evening. I was looking forward to watching the cricket - albeit on TV - the following day, which was something I did in the flesh regularly when I lived in Leeds, particularly when I was based in Headingley during the early 80's. I used to say to people - only half-jokingly - that it used to take longer to put the kettle on for a brew at my flat than walk down the road to the cricket ground and order a pint!

Not that the beer was normally up to much. In those days it was keg Tetleys - warm, of course, as fondly referred to by former Prime Minister John Major when recalling the things that to him that made England special - and whilst in later years, the Headingley ground has dabbled with real ale from the likes of Black Sheep and Marstons, it has smacked of tokenism with the beer often running off, and then being over-priced when it has been on.

Headingley was a desert for real ale when I lived there, iconic local pubs like the Original Oak and the Skyrack having nothing to offer. The nearest decent pint back then was to be found a mile or two away on Kirkstall Road at the Cardigan Arms, which back in those days was a bastion of the Tetley empire, but now, after years in the doldrums, is thriving again having been lovingly restored to its former glories by Kirkstall Brewery.
A more recent pub, also owned by Kirkstall Brewery, is located about a mile away on the way to the eponymous Abbey. This is the Kirkstall Bridge Inn, which is situated beside the River Aire. This is another excellent pub with good beer from both Kirkstall and guest breweries, plus decent food, and is ideal to call in after a day watching the cricket. It has an upstairs and downstairs bar and extensive beer gardens overlooking the river.
The pub I tend to go in these days when at the cricket - which is just about doable during the lunch interval - is Arcadia, situated in a parade of shops on the main Otley Road. This is a former bank, lovingly turned into a stylish and welcoming bar by Market Town Taverns. Beers tend to be from a range of local breweries, plus Manx Bitter from Okells, whose owners also own Market Town Taverns. This is a welcome oasis in Headingley, which, whilst not being without other outlets for real ale these days, tends to cater more for the livelier student market.
And so, back to Saturday night. I was in Leeds for a gig at the intriguingly-named Hyde Park Book Club, just down the Otley Road from Headingley. Arcadia has a sister pub a mile or two away in Meanwood, called, logically enough, East of Arcadia, and never having been before, I decided to check it out before the gig. The satnav got me there without any issues and I got parked up. Like the original bar, East of Arcadia is situated in a modern building, and is in quite a striking position, on the corner of Meanwood Road and Monk Bridge Road.
I walked in, the bar is right facing you as you go in, with a chalkboard on the wall at the side proclaiming the wares on offer. I went for a half of Bristol Beer Factory Hummingbird, a delicious 4.2% session pale. I headed off to the far side of the sweeping bar, which follows the shape of this corner building. It was busy, with groups out for a Saturday night, families, the odd individual like myself making up the numbers. Whilst I couldn't fault the beer, I can't say I warmed to East of Arcadia. The staff were not particularly friendly and despite being busy, there was little atmosphere, and in many ways it seemed like a typical modern Wetherspoons.

I walked back to the car in the rain, and headed over to Hyde Park passing through the heavily-wooded Meanwood Valley, emerging a few minutes later at the traffic lights not far from Arcadia in Headingley. I decided I would go straight to the gig. I drove through Headingley, passing the Skyrack on the right and the Original Oak on the left, with a stream of people in fancy dress snaking towards Hyde Park. These I assume would be doing the Otley Run, a near-legendary pub crawl which considerably pre-dates the rail ale trails we are used to these days. 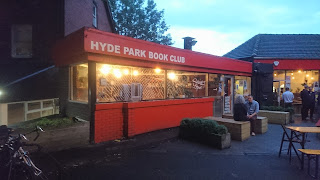 I eventually found the Hyde Park Book Club, which despite its striking bright exterior I drove past a couple of times despite the satnav taking me there! I parked up on one of the leafy roads close by and made my way in and handed over my ticket confirmation. I had come to see Australian band, The Stroppies, who I have enjoyed hearing on 6 Music over the past 12 months. They weren't due on till 10, so hand stamped, I decided to go for a walk around Hyde Park.

I decided to give the huge Hyde Park a miss, the crap music that was blaring out and the bouncers putting me off. I found a quiet bar, LS6, just up the road, situated in what was the Clock Cafe when I lived in these parts. I ordered a half of Neck Oil from Beavertown, and went and sat at a table by the window, and checked out twitter. A couple of people were sat at different tables, both on laptops. There was a chilled-out world music soundtrack. The Otley runners started to stagger by, no doubt going to the Hyde Park. A large banana passed the window, with a couple of tigers and a gorilla not far behind. One of the guys behind the bar stopped by for a chat whilst he was cleaning the tables. He was Nick, an Italian who'd been in Leeds for 6 years, and loved the city and Yorkshire even more.

I made my way over the road to the Book Club. Part-cafebar, part-library, part-community centre, it is a friendly but quirky place, set in a rambling series of buildings, which surprisingly has a basement, which was where the music was. I attempted to order a half of Mango Unchained from Shindigger, but unfortunately it had gone off, so I settled on half of a grapefruit wheat beer, which was very nice. I went downstairs, down some rickety stairs into a small, somewhat basic cellar room. One of the two support bands, Wormboys was still on stage and they were going down well with the crowd. They carried on playing well past 10, and I enjoyed their riffy sound. After the show they mingled with the crowd, and I had a brief chat with lead singer Sop, who told me they were based in Leeds, and I said I would try and check them out again.

A few minutes later, the Stroppies appeared. No teams of roadies here, the guys plugged in their instruments and did their own sound checks. They are from Melbourne, and comprise 3 guys and a girl, with guitars, bass, drums and keyboard creating a catchy, modern bubblegum indie-pop, but are not afraid to noodle around a bit as they did on closer Cellophane Car. It is deceptively simple stuff, and most enjoyable, the band's good nature and enthusiasm bouncing around the small room as they played some great tracks from their album Whoosh. It was a lovely evening overall, and good to go back to an area where I lived for several years.
And so, back to the cricket. As I write this, after the most fascinating and enthralling tussle you could imagine, England have beaten New Zealand at Lords in the most dramatic circumstances to lift the Cricket World Cup for the first time. Some brilliant cricket from both teams, played in a spirit of exemplary sportsmanship by two excellent teams. It was draining to watch, so heaven knows what it was like for the guys actually taking part!

Very much a case of Real Cricket....