July 07, 2019
A pint on a lovely evening at a pub high in the Pennine hills in a former part of Yorkshire set me off thinking about how many similar places we have lost over the years.... 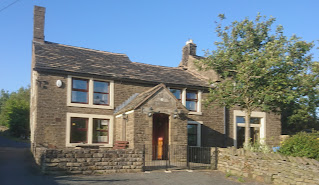 The Royal Oak is situated at a spot called Heights, in the Tame Valley in Saddleworth, high above the lovely village of Delph. I pass through the village most days on my way to work, but this time I had dropped our Tom off for a birthday do for one of his old mates who lives there. Driving back, on a lovely summer's evening, on a whim I decided to call at the Royal Oak, a Good Beer Guide regular, several years after I had last visited. I turned off the road to Denshaw, up Tame Lane and along a series of narrow country lanes until I came to a widening of the road, with a chapel on the left and a solid farmhouse-like building on the right, which is the Royal Oak.

I turned the car around to face back down the hill and parked up. There was the sound of birdsong and a distant bleat from a sheep. The soothing, timeless sounds of the country. The Royal Oak does look like a farmhouse precisely because it was one, but when I asked the landlady, who I recognised from my last visit, of its current status, she said it wasn't a farm these days, although they still had some sheep, a few chickens, and a solitary horse.

Entering the pub, with its name engraved above in the stone, the white rose denoting its original Yorkshire roots, before boundary changes unceremoniously dumped Saddleworth in with Oldham, is like stepping back in time to a quieter, more unhurried time. There are three rooms, a lounge to the left, the main bar to the right, with a further room beyond. An old clock ticked loudly (or did I imagine it?). Everywhere is traditionally furnished and I could have travelled back in time to the 60's and it wouldn't have been much different. The bar itself has 4 hand pumps, of which 3 were in use tonight - the house Heights Bitter - brewed by Coach House of Warrington, Tiger Rut from Millstone of nearby Mossley, with a Moorhouses making up the trio. 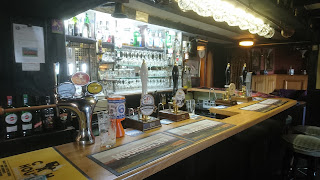 I wandered outside with my pint of Tiger Rut and sat on a bench in front of the pub at a huge stone table. A pick up truck pulled up and from it emerged a couple with a typically-lively and yappy Jack Russell, who took the lady for a walk whilst her companion came across to the pub for a pint, the two joining him for a drink a few minutes later.

It was idyllic. The sun was still warm, the birds were in fine voice, and the views over the Pennines beyond Delph were wonderful.... 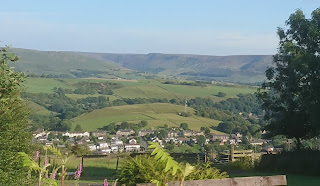 The Royal Oak is one of an increasingly and sadly diminishing breed these days. As I took my glass back to the bar when I was leaving, the landlady grumbled that the weather forecast for tomorrow (Sunday) wasn't good, so that would mean it would be a quiet day. And that is a problem for pubs like the Royal Oak, which don't open for many hours anyway, off the beaten track save for the odd walker and farmer. Dependant on passing trade, and being a wet-only pub, the target audience is limited to start with. Many of the former farmers who would have frequented the Royal Oak have passed away or sold up, and the 4x4 commuters who have bought up their properties are largely not going to be tempted away from their home comforts. But the Royal Oak is a wonderful, traditional, country pub, a step back in time, and it would be a real shame if it went the way of so many former countryside pubs.

The drive back the A62 from Delph over to Marsden emphasises this point. Rising up past the Delph & Dobcross Cricket Club - who true to their Yorkshire roots ply their trade in the Huddersfield League - you reach the former Horse & Jockey opposite the turn off to Uppermill. This former Oldham Breweries pub has been derelict for years, with trees growing out of the ruins. A little further on, as you approach Standedge, you pass the former Floating Light, which has been a house for years. And once you have crossed the border into official Yorkshire, you pass the former Great Western which until only a few years ago served excellent food alongside the real ale. The Carriage House on the right a little further on the road is still open, but has been a restaurant for years. There is another former pub on the left whose name I forget, which on the only occasion I called in was one of the most soulless places I have ever visited, but also close to Marsden was the wonderful Tunnel End Inn, which was situated near to the Standege Visitor Centre, was extremely popular with walkers and families, served decent food and was a rare outlet in these parts for Golden Globe from the now-closed Shaws Brewery in Dukinfield. And then, a few years ago it sadly and suddenly closed.

Calderdale has had more of its share of country pub closures, too. The Blue Ball at Soyland was always very popular and a real destination pub with great beer and a wonderful craic, situated on the hillside off the A58 Halifax to Rochdale road with great views over Baitings Reservoir. But then owner and landlord Tony Foster decided to retire and so the pub closed.
Down the hill, over a couple of fields, was another popular pub, the New Inn, which also became a private house. There are many more: the Blue Ball and New Rock at Norland, the Brown Cow at Scammonden, the Withens Hotel beyond Wainstalls. But the pub with arguably the best vista in Calderdale, which has now become a B'n'B, was the Mount Skip high above Mytholmroyd, with views stretching for miles over the Calder Valley, Cragg Vale, and beyond. This was run by Taylors Brewery, and it was always a mystery to me as to why they sold it off, as it always seemed to be a popular spot.
There are plenty more country pubs that have closed over the years. A few soldier on, some successfully, usually though not always with food as their core offer. Some places have their own advantage, like the White Horse at Blackstone Edge, with regular traffic from both motorists and walkers, the Packhorse at Ridge, and the New Delight at Colden, with its own campsite meaning there is a regular flow of visitors particularly in the summer months as the Pennine Way passes close by all three.

But pubs like these are increasingly becoming fewer in number and as history shows us, once a country pub shuts, it is highly unlikely it will open again.

Which is what makes places like the Royal Oak all the more special and worthy of a visit....

Postscript: It was reported in The Saddleworth Independent on March 3rd, 2020 that due to persistent falling trade, owners Michael and Sheila had decided to call time permanently. And so, unfortunately, the Royal Oak becomes the latest to join a very long list of former country pubs.... 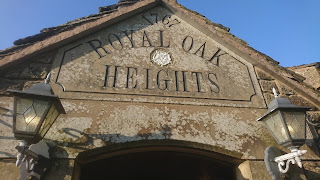