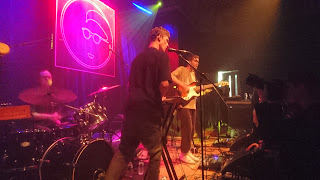 Manchester has had its fair share of iconic gigs.

The Sex Pistols at the Lesser Free Trade.

Both gigs where seemingly everyone claims they were there, although I have to say that I wasn't at either myself (I did see Dylan at a festival in Hampshire once and I was at another everyone-was-there gig when I saw the Sex Pistols play their last ever UK gig at Ivanhoe's in Huddersfield on Christmas Day night in 1977 in a benefit gig for striking firefighters).

Time will tell if the recent sell-out gig at the Band on The Wall featuring Hebden Bridge's Working Men's Club and local guys W.H. Lung will in the years to come be an I was there gig, but I wouldn't mind betting that it does. Two bands on the cusp of great things. Both having released some of the best music of the year so far; Working Men's Club, a killer single in Bad Blood, W.H.Lung a killer album, Incidental Music, both released on Melodic Records, the label set up 20 years ago by David Cooper, and based just around the corner from the BOTW on Thomas Street, although Working Men's Club have recently signed for Heavenly Recordings.

Working Men's Club bounced on to the stage, singer Sid fizzing and crackling with energy. Their spiky, riffing tunes reminiscent a little of early Talking Heads, a touch of Parquet Courts, with a splash of Orange Juice thrown in too. The band played a tight, exciting set of 6 tunes, with Bad Blood the almost inevitable stand out, as befits a single that sold out on pre-order and became a fixture on the 6 Music playlist. Despite their youthfulness, Working Men's Club sound like a band that have been playing together for years. If you get the chance to see them live, jump at the opportunity. They are supporting Bodega at the Hebden Bridge Trades Club in August and I can't wait to see them again.
We had a quick pint at the bar after the set finished, and after a short break, it was time to go back in for W.H. Lung. Named after a Chinese supermarket in Manchester, I had first heard Incidental Music months before its release when the Melodic team visited Halifax on their Christmas do, and persuaded owner Michael to play the just-completed recording of the album over the Grayston Unity sound system. As Simpatico People filled the small bar I realised we were listening to something special. Checking later, there was only the odd track available on You Tube, and gigs seemed to be pretty thin on the ground.

I was driving home from work a few months later and DJ Huw Stephens announced on 6 Music that he would be playing the new single from the debut album by a new band from Manchester, W.H.Lung. The track? Simpatico People. A bold choice for an opening single, clocking in at over 10 minutes. A statement of intent, a setting down of lines, a marking of territory.

And so it was a tour was announced, with a key focus being a home town gig at the Band on The Wall. And naturally, they opened the evening with Simpatico People. This is a big track, an anthem, with sweeping synths and ringing guitar. It set the tone for the rest of the gig, with the band playing excellent tracks from their album, referencing the likes of LCD Soundsystem and Krautrock motorik, but with plenty of nods to jazz, rock, and pop along the way. And as singer Joseph E struts around the stage and leans angularly as he strikes the keyboard, there is a certain swagger, an attitude. Standing like a barefooted tracky-bottomed preacher, he points out at the crowd and to the sky as he sings, very much the focus of the band. 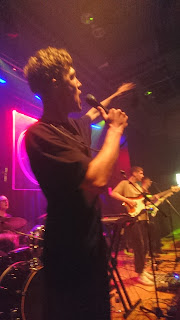 Not that they are a one man band, far from it. Guitarist Tom S sparkles on guitar, and so do the rest of the band, with tonight the core of 3 members - Tom P is on bass - boosted by a drummer and second guitarist.

The gig passed too quickly, as as we filed out back to the bar there was a feeling that we had all witnessed something special. It had been one of the most exhilarating gigs I had been to in a very long time. If W.H.Lung are passing by your way, make sure you check them out.

And I can honestly say that I was there.... 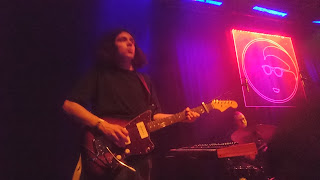 And here is Bad Blood by Working Men's Club....

And this is Simpatico People by W.H. Lung....