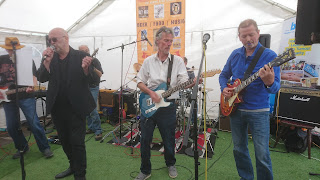 So sang Robert Johnson in his song of the same name from 1937, later covered by Eric Clapton on his classic 1974 album 461 Ocean Boulevard.

Steady Rollin' Man is also the name of the hoppy New England pale ale from DEYA brewery which was named recently as one of the most influential beers of the past 10 years in an article in Pellicle Magazine, a new publication "devoted to exploring beer, wine, cider, travel, and food, and the joy we find within these cultures." Curated by Jonny Hamilton, the article is a series of short essays by a number of eminent beer writers, brewers, and critics in which each extols the virtues of a beer that they believe has helped to define the British beer scene over the past decade. 21 different beers are named, and included in the list are several well-known beers (some less so), and I was pleased to see a few favourites such as Marble Pint, Jarl from Fyne Ales, Table Beer from Kernel Brewery, Beavertown Gamma Ray, and Moor So'hop. Others on the list include the inevitable Brewdog Punk IPA and Thornbridge Jaipur. Yorkshire is represented by the once-a-year release, Unhuman Cannonball from Magic Rock - with the piece contributed by Stalybridge Buffet Bar regular and Huddersfield Town fan Mark Johnson - and KopiKat from Summer Wine brewery, a unique Imperial Stout which has only ever been brewed twice. Others on the list include Yellow Belly, the Buxton/Omnipollo collaboration, and the excellent Tzatziki Sour from Mad Hatter, which tastes just like, er, tzatziki, and there are also beers from the likes of Cloudwater, Wild Beer Co, Brodies, and Burning Sky.
The article makes for interesting reading, and whilst these kind of lists always tend to provoke discussion and argument - what about so-and-so, that one's rubbish, you've got to be kidding, etc. - I think they have covered most bases pretty well. Check it out for yourself at www.pelliclemag.com.

***************
Meanwhile, last weekend, it was another damp Bank Holiday weekend. I had been invited to help some friends, Andrew and Sharon, celebrate their Silver Wedding Anniversary on the Saturday at the Grayston Unity in Halifax. There was music on in the covered back yard courtesy of Andrew, aka Spud's band Zenit, and local favourites the Weedwackers, and very enjoyable it was too. Zenit are an excellent covers band from Halifax, playing tunes from the likes of Buzzcocks, the Undertones, and the Jam, and kept us entertained for an hour or so as we enjoyed some great beer from Ilkley Brewery, with an excellent version of the Eddie and the Hot Rods classic 'Do Anything You Wanna Do', being a particular stand out.
Next up were the Weedwackers, again excellent, playing some fine bluesy rockabilly. I had to head off to get my bus, but it had been a most enjoyable evening for the large crowd despite the miserable weather. It was sad to hear that the Grayston got broken into over the weekend, as I discovered when I popped in for a pint on Bank Holiday Monday, although fortunately it appears the intruder(s) were disturbed and got away with very little, but there was still the fact that someone had broken in to your property, the hassle of having to clear up the mess and having to sort out repairs, insurance, etc. And for barman Steve, there was the additional inconvenience of not being able to use the now-closed-until-repaired side door by the bar when going out for his fag break!
Neither band played Steady Rollin' Man on Saturday, and neither did my good friends Blood, Sweat, and Beers, who I saw the following day at the annual Beck Beer Festival in Brighouse. They were on as usual in the marquee round the back of this popular pub, which lies just out of town on Bradford Road. There were a number of different beers on both in the marquee and in the pub itself, with Salopian Oracle in particular going down very well. As always, it was great to catch up with friends and loads of people I hadn't seen for ages. The band were in fine form, starting as usual with a great version of Jimi Hendrix's Red House, moving on through a mix of classics from the likes of the Rolling Stones, the Doors, and Van Morrison. Great stuff.
From the Beck, I headed into Brighouse to the Market Tavern, with Dave, another of the regulars, where the Squawk was in excellent form as usual. They had had a busy weekend here too, but as I discovered when I popped in during the week, they were bracing themselves for the upcoming weekend when they were expecting the usual large crowds to descend on Brighouse for the annual '40's event. The building was draped in camouflage, but in previous years that has never prevented large numbers of people finding this friendly micropub to sample the excellent beers! The team were planning to dress up for the occasion, joining the GI's, the generals, the sailors, and the others who don period dress and wander through the town to hear the wartime music, admire the Spitfire, tanks and assorted military vehicles and old cars, as well as the obligatory market stalls and fast food vans that no self-respecting festival can live without these days.

Rolling on by until the next time....