June 08, 2019
On the day that Liverpool played Spurs in the Champions League Final in Madrid and the Spice Girls played another comeback gig at the Etihad, I made my first visit to the Stockport Beer Festival and went to see Dutch indie band Pip Blom at the Band On The Wall.... 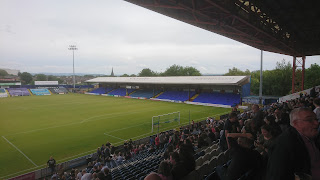 I got a ticket to see Pip Blom months ago, but my decision to visit the Stockport Beer Festival was only made a few days earlier when one of my friends at the Stalybridge Buffet Bar said they were going. So I got the Manchester Airport train over from Huddersfield, and as luck would have it, the journey involved stops at Manchester Victoria, Oxford Road, then Piccadilly - from where trains from Stockport leave. Get in!

But, there was an additional delight. The route from Victoria to Oxford Road involves traversing the Ordsall Chord, a short stretch of line that only opened in December 2017, linking the main stations in Manchester. It was amazing, for a few minutes there were stunning views of the old buildings, new developments, the canal network way down below. I was reminded of Fritz Lang's classic film from 1927, 'Metropolis'. What they should do is open a walkway up alongside the line so you could wander and stare at this impressive cityscape at your leisure, although I am sure the Health and Safety authorities would have other ideas....

I arrived at Piccadilly, and hopped on a train to Stockport a few minutes later. The train was eventually going to Pembroke Dock, and the lilt of Welsh accents filled the carriage. A smiley girl with a large musical instrument stowed safely in a case shuffled up to let me sit down. Probably a cello, I thought.

Seven minutes or so later, the train pulled into Stockport station, having crossed over the huge viaduct with its 27 arches and 11 million bricks which straddles the town. From there, it was a 10 minute walk to the Beer Festival, which was being held once again at Edgeley Park, the home of Stockport County FC. The beer festival has been based at the football ground for a good few years now, but it was my first visit. According to the build-up in the excellent, bi-monthly local CAMRA magazine, 'Opening Times', there would be over 200 beers, ciders, and perries available.
The main bar was set up on the concourse beneath the main home stand, with a further bar at ground level in the main banqueting suite, where entertainment was being provided by a number of different artists over the course of the festival. Beers came from far and wide, from the South West across to East Anglia, from the North East to the South. I opened my account with what turned out to be my favourite beer of the day, a half of Wooden Ships from Merseyside brewers, Neptune, a refreshing single hop pale made with the Centennial hop. I wandered outside into the stand to see if I could spot my friends. Sure enough, as I emerged into the light, Rick and Wes were coming up the steps to go for a refill, with the rest of them sat further down the stand overlooking the empty pitch. A great idea this, plenty of space, and it certainly made for a more enjoyable afternoon than several I spent in football grounds last season!
I used the opportunity to try some of the newish North West breweries I'd not come across or tried before, such as Chapter from Sutton Weaver in Cheshire, Mobberley, from the eponymous Cheshire village, Made of Stone from nearby Bramhall, whose 4.7% Metamorphic Ekuanot Chinook was most enjoyable, and which I followed up with Run Riot, a peanut butter milk stout from Stockport's Fool Hardy Ales, which was on in the Bar Nouveau downstairs, where local band Ten Million Suns treated us to covers of various punk and Britpop classics.

After an enjoyable couple of hours, the forthcoming attractions of Pip Blom and the Champions League Final dictated that we moved on and back to Manchester. I enjoyed the Stockport Beer Festival, it was well organised with some good beers and facilities, and I will no doubt pay a visit again. The Virgin Express decanted us at Piccadilly, and we bade our farewells, the others heading back to Stalybridge, whilst I went for a half of Stone IPA down the ramp at Tapped and decided my next moves. Beer-curry-beer-gig seemed the best plan.

As I wandered towards Dale Street, the pavements were filled with hordes of Spice-Girl wannabees of variable ages on their way to the Etihad. I reached the sanctuary of Beatnikz Republic, and made my way to the bar. Probably still dazed by my walk from the station, I made the fatal error of ordering a half of Omnipollo Mango Gose without realising the price quoted on the board was for a half. I retreated to a seat to recover from the shock. At £6.25, You will enjoy it and savour every last drop and vapour.... No worries, it was stunning, honest! A group from the UK Craft Beer Forum came and sat beside me, having had a seemingly enjoyable day in Manchester.

Curry next, so it was to Al-Faisal on Thomas Street, where the Lamb Karahi was excellent. Great value food as ever as the Northern Quarter rushed by outside, more Spice Girl attendees adding to the busy throng. I headed up to the Band On The Wall to check what time the band were on, and then moved on the few yards to The Smithfield Tavern, where I ordered a pint of Barleycorn from Blackjack, which was very pleasant, and I followed up with a half of Arbor I Speak For The Trees. The Mosaic had run off by the time I got to the Beer Festival earlier, but it is great to see this excellent brewery from Bristol getting into Manchester more regularly now. And as ever, the beer was in top form at the Smithfield!
It was the first time I had been to the Band On The Wall since I saw jazz outfit the Neil Cowley Trio there over two years ago. The venue has generally tended to focus more on jazz, folk, and world music, but it seems they are broadening out the scope of music on offer. Pip Blom are from Amsterdam, and over the past few months their energetic, melodic indie tunes have been played regularly on 6 Music. It was one of the opening gigs of their tour, and there was a decent crowd in the venue, although as I usually do, I managed to worm my way to the front. The band were just doing their final sound checks, and once happy, they went off stage, returning to perform a few minutes later. The band is a four-piece, fronted by Pip on guitar and blues-tinged vocals, her brother Tender on lead guitar and vocals, Darek Mercks on bass, and Gini Cameron on drums. Their first album Boat has just been released, and they treated us to energetic versions of tracks from it, such as Daddy Issues, Ruby, Bedhead, and Set of Stairs. As they leapt around the stage, they weren't the easiest band to photograph, but I managed a get a few
I enjoyed Pip Blom, and they are currently touring, and will be returning to the UK later in the summer to do some festivals. and are then back to do some dates in the autumn, so if you get the chance, they are well worth seeing. It was time to head off down the hill to Victoria to catch my train, having had an enjoyable day which ended with honours split evenly between the two halves....

'Boat' by Pip Blom is out now on Heavenly Records.
And here are Pip Blom with 'Ruby'....