Piecing Back The Puzzle....

January 14, 2020
An iconic Calderdale pub re-opened its doors a few days before Christmas after being closed for several years. And so I've been along to have a look.... 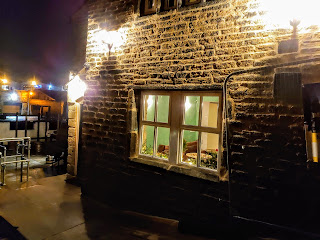 The Puzzle Hall in Sowerby Bridge was always a quirky place. I first visited it 40-odd years ago when I was growing up in the town. Back then it was a tied house belonging to Wards of Sheffield, one of only two pubs they had in Calderdale (the other was The Star at Greetland). This in itself marked it out as unusual at a time when the local pub scene was dominated by the likes of Websters, Tetleys, and Whitbread.

Its location, on Hollins Mill Lane, past the town's swimming baths, library, and fire station (only the library is still open these days), was somewhat isolated, squeezed in between the river and industrial units, with the Rochdale Canal flowing above on a bank across the narrow road. This meant that, despite only being a few minutes' walk from the busy A58, it was on the edge of town, not really on the road to anywhere. It wasn't a place you walked past and in those days the canal boats and walkers were not as frequent as they are today. It was a place you went to with a purpose not on a whim. And it looked unusual too, originally a cottage dating back to the 17th century, but with a more recent tower tagged on at the back, harking back to the days when it was a brewpub.
And it was a place which seemed to attract characters. Whether this was due to the location, I don't know, but it had a real mix of eclectic and Bohemian customers which meant a visit would more often than not be an experience, even if you had just gone for a quick pint or to meet a mate. One of these characters was Gerry Melonie, a native of Gloucestershire, who would regularly have whoever happened to be in the pub at the time in stitches with one of his many stories recounted in his loud and distinctive West Country accent. He loved the Puzzle, and eventually became a popular landlord of the pub for a while. He also ran the Dolphin at Robin Hood's Bay for a time, and I remember calling in to see him when my eldest two were young and we were on a seaside day out. We left their buckets and spades at the pub, but Gerry simply collared the next couple of visitors from round here to bring them back, which saw them being taken on a pub crawl around the Yorkshire coast and a detour via Rochdale as the guys fell asleep on the train and missed the stop at Halifax! When Gerry died at a relatively young age, his coffin was taken by canal barge from Sowerby Bridge to the crematorium at Elland where hundreds attended his funeral. A real character.

The pub was almost a fixture in the Good Beer Guide over the years, and regularly had music on, in later years on the site of the former toilets on a purpose-built covered stage at the bottom of the sloping yard outside. The pub had faced closure before, but time was finally called at the end of 2015. When no offers were forthcoming due to the hefty price tag put on the pub by the pubco, the Puzzle Hall Community Pub group was set up with the aim of raising £350,000 to buy the pub, with many individuals both local and from further afield donating to the cause. As I wrote in this blog back in 2017, the group achieved this just before Christmas that year, but despite initial plans to open earlier, they faced several setbacks, not least vandalism. A new roof was required, the place needed completely renovating inside, and some minor structural changes have been made, but not dramatic enough to alter the basic layout of the place.

Word went around saying that the Puzzle had opened its doors, around 2 years after they had achieved their target. I called in with a couple of friends on a Monday evening just before Christmas. There were several people having a nosey, just as we were. The pub has always been micro-sized, split into two small rooms, and that has been retained. The bar is in the room to the right beyond the room you enter. It looks like it has been slightly built out. 6 hand pumps face you, and these have tended to dispense beers from the likes of Salopian, Elland, and Nightjar on the occasions I have visited. 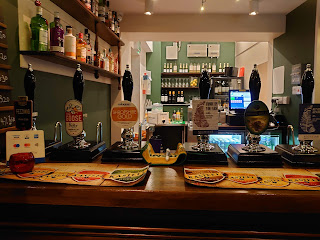 The pub looks very smart, with green and cream painted walls and a feature in the bar is a new stone fireplace, which has 'Puzzle' and 'Hall' carved out in relief on the sides. Meanwhile, in the corridor on the way to the toilets, there is a link to the past, with posters of bands and artists who had featured at the Puzzle over the years pasted on the wall.
One person who was a big fan of the Puzzle and community pubs in general and the people who visited them was Sean Liquorish, who wrote for several years for The Pub Paper and his regular blog until his untimely death at the age of 42 in January 2017. Sean was always very encouraging in my early days as a blogger and I always enjoyed catching up with him for a pint, usually at The Cross Keys at Siddal. His widow, Andrea, contacted me recently to say that she had invested some money into the Puzzle venture in his memory, and to tell me that her new partner, photographer Jason Foster, who was a good friend of Sean, has photographed the whole venture from the build stage through to now. It will be in the form of a virtual reality tour and will be available online and via VR headsets in the coming weeks. Incidentally, Jason has an exhibition entitled One Year in The Life of The Grayston, which opens at The Grayston Unity in Halifax in the middle of this year's Independent Venue Week on January 29th, and should be well worth checking out.

Meanwhile, back at The Puzzle, it is great to see the place open again, even though they still seem to be finding their feet, and when I have visited, the sign on the roadside hasn't been lit up. There have though been plenty of people calling in when I have been in, which bodes well. I was asking about opening hours, and one of the bar staff suggested they would be opening at 5 during the week, 4 on Fridays, and 12 on Saturdays and Sundays, but I would recommend you check first. Parking is limited, but it isn't far out of the town, and plenty of buses pass along the main road. Sowerby Bridge station is just over 10 minutes walk away.

It is still very much early days, and I am sure as time moves on, the pub will find what works best for them. The Puzzle has meant a lot of things to lots of different people from far and wide over many years, and over all those years since I first went in it had evolved considerably by the time it shut. This is the Puzzle 2020-style, maybe not as quirky, maybe not yet finished, but it still has plenty of the spirit of the place. And I wish them well.... 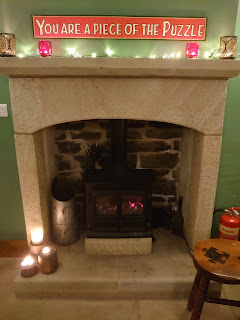