October 08, 2019
The second Halifax Festival of Words took place in the town over the weekend, and here's a few thoughts from up close.... 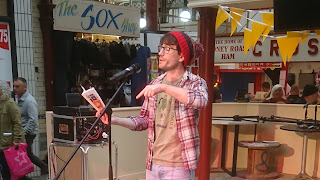 It was a busy weekend in Halifax, with Festival-related activities spread across three days and three main venues, The Grayston Unity, the Book Corner, situated in the Piece Hall, and the Albany Arcade, a great space that had opened last year for the Festival amidst the splendour of the town's Grade ll-listed Victorian market. The event is an annual celebration of communication, and featured talks, spoken word, live music, publishers, authors, illustrators, and Q&A's.

It was an eclectic mix across the venues. The event had kicked off at the Book Corner on Friday morning with a version of Gardener's Question Time with the author of The Yorkshire Organic Gardener, Graham Porter, Radio Leeds' very own gardening expert. Later in the day, I hosted a Q&A at the Grayston on Friday night, with Sybil Bell, the founder of Independent Venue Week, and Mal Campbell from the Hebden Bridge Trades Club. A fascinating hour's conversation ensued, with the discussion covering such varied topics as how IVW had come about and why it is so important to support local, independently-run venues which play such a big part in the life of their community, the band that Mal wished he had managed to book at the Trades Club, which is one of those said venues, the difficulties of dealing with promoters, IVW now being active in the USA, and even Sandie Shaw! After that, James Endeacott, DJ, founder of 1965 Records, former A and R man for Rough Trade Records who, amongst other things, discovered The Libertines, and like Sybil, was one of the patrons of this year's Festival, played an excellent and varied DJ set, and rounded off a great start to the event.
Day 2, and I was based mainly in The Albany Arcade, where I was acting as compere for most of the time. We had stand-up performance poetry from Benjamin Guilfoyle, with a number of his amusing stories to start us off, followed by the socio-political dark humour of Microphone Jack, both of whom were brilliant, and well-worth seeing if you get the chance. By way of a contrast, the next performers were from the St Augustines' Centre in Halifax, which is an open-access and community support centre working with, amongst others, refugees and asylum seekers. A group of them, from countries such as Iran, Syria, and Lebanon, as well as local people, entertained a large crowd in the market with music and words. One of the Iranians was opera-trained and had a superb voice, whilst one of the Syrians performed a rap in Arabic. It was moving and humbling, and it was a privilege to introduce them.

It was a mad dash over to The Grayston, where I was chairing a conversation with James Endeacott, with whom I had first shared a stage at last year's event, and John Robb, lead singer and bassist of post-punk band, The Membranes, who is also an author, journalist, publisher, talking head, and founder of the Louder than War music and culture website and magazine, as well as the person attributed with coming up with the term 'Britpop'. It was fascinating and a real privilege, listening to two music industry legends and media professionals sharing their thoughts on the music business and host of anecdotes in a most entertaining manner with a packed and attentive room.
Back down to the Arcade to resume compere duties and over the course of the next few hours, a large crowd enjoyed listening to and dancing to the ska of Hebden Bridge band Owter Zeds, the country rock of Derbyshire's Rooks and the Ravens, and folk-rock with a modern twist from Liverpool band The Fernweh. All good stuff.
We retreated to the Meandering Bear for a much-needed beer, where founder of electro-indie band St Etienne, record producer, author - he is currently working on a book about The Fall - and journalist, Bob Stanley was playing a DJ set. I caught up with Bob the following day at The Grayston, where I hosted a conversation with him and James. As with John, this was a captivating hour, with Bob, a massive vinyl collector giving us a insight into his varied career, and James, clearly a big fan of Bob's work, citing the 2002 film Finisterre, a nostalgic journey through London set to a brilliant soundtrack by St Etienne as one of his favourites, and taking the opportunity to ask him questions that he'd not had chance to do so before, and highlight his skill as a curator of compilation albums, and his love of, amongst other things, cafes.
The festival was coming to a close, but not before we'd had some more music. First up was folk singer, Katie Spencer, who I had seen earlier in the year at The Grayston, and whose album Weather Beaten is excellent. The set didn't disappoint, with Katie's superb voice recalling the likes of Joni Mitchell accompanied by her intricate guitar playing. If you get the chance to see her, you will not be disappointed.
Finally, as the Festival was drawing to a close, a genuine musical legend played at The Grayston. This was Michael Chapman whom I had seen earlier in the year at the Trades Club. Maybe it was the fact that he'd had a cold that night, maybe it was the intimacy of the setting here, but it was a spellbinding performance as he treated us to a few tracks from his superb latest album, True North, and several from his extensive back catalogue. His superb country blues songs, gravelly vocals, and superb guitar-playing kept the packed room enthralled for over an hour. After the gig, he hung around, signing albums and chatting over a glass of red wine to a very appreciative group for ages. A very special performance, and a high point on which to close the weekend.
The Festival seemed to be busier than last year, and whilst it was harder to be able to get an overview and have a proper wander around with being more involved than last year, it did seem to be very well-received. And it did mean there were a few events I couldn't get to, such as local poet Keiron Higgins' walking poetry tour of the town and Melodic Records' founder David Cooper in conversation with Michael Ainsworth (although they would have clashed). Being involved though and having the chance to meet up and talk to so many interesting people and see some wonderful artists made it a special weekend for me. And thanks to some brilliant organisation from Michael from the Grayston, Martin Riley, and Louise and the team from the Book Corner, Oscar who did the sound, and all the teams across the various venues who did a fantastic job, it was another weekend to remember for the town.

And, finally, it did feel that compared to last year, the Festival of Words had moved up to another level....