October 15, 2019
A few days in Edinburgh provided the perfect opportunity to visit some of the city's wonderful pubs. Here's a few of them.... 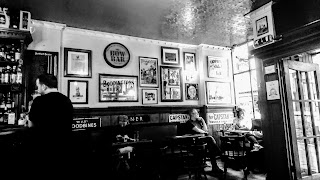 The train pulled into the canyon below Princess Street that plays host to Edinburgh Waverley Station. Emerging on to the street, the castle was shrouded in mist in the distance. To the left, the Scott Memorial was an eerie shape amidst the gloom, looking very much the steampunk rocket as someone once described it. It was a gloomy welcome for my first visit to the city for nearly 20 years.

I fancied a pint after almost 3 hours on the train, so across the road and on to West Register Street, where at Number 1, the Guildford Arms awaited. 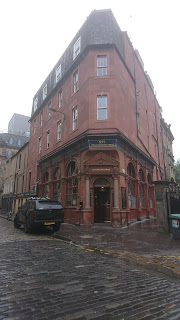 This is a pub I had visited before, and it hadn't changed a bit in all those years. Dark wood, high ceilings, chandeliers, a classic Victorian interior. And a pint of fine Jarl from Fyne Ales whose quality set the tone for the rest of the visit. As did the price, at £4.40, Edinburgh is not a cheap place for a pint. But sat at one of the polished wood on a late afternoon with couples and singles sat at the tables and a few early finishers enjoying an after-work drink, it was a most agreeable place to while away half an hour. With its upstairs gallery restaurant, the Guildford certainly has a Victorian grandeur, but its next door neighbour, at number 19 West Register Street (what happened to numbers 2 to 18?), is even grander.

The Cafe Royal shares many of the same Victorian features of the Guildford, but with an island bar, glazing, and ceramic tiled murals featuring innovators, plus a separate Oyster Bar, it is one classy place, one that feels it can happily get away with charging £4.80 for a pint of Stewart Pentland IPA. But like the Guildford, the Cafe Royal is a wonderful place and on the two visits I made on the trip, it was very busy with most of the tables and spaces at the bar taken.
I was staying at the Travelodge at Waterloo Place, just at the east end of Princess Street, in the shadow of the not-so-visible today Calton Hill, and 5 minutes walk from the station. I checked in, dropped my bag off, and headed out. It was certainly a convenient location, the only drawback being the long wait at the pedestrian crossing as yet another maroon and cream bus ferried its passengers towards Bonnyrigg or Leith.

Princess Street is busy, but running parallel is Rose Street, pedestrianised and full of little shops, restaurants, and a few pubs. There's even a branch of Fopp Records, my favourite chain, where I picked up a copy of Lux Prima by Karen O and Danger Mouse, a serious contender for album of the year. And it is also home to the Abbotsford, a very friendly pub - like most I visited - where I had a delicious piece of cod on crushed potatoes, only for the pint of Windswept Blonde to be slightly disappointing.
Next up was a place I had been wanting to visit for many years. As a big fan of the Rebus books by Ian Rankin, I needed to pay a visit to the pub patronised by the misanthropic Edinburgh detective and his author. The Oxford Bar is situated on Young Street, situated amongst the elegant streets and buildings of the city's New Town. It is a small, corner pub, with a bar as you go in, and a few steps up to the right there is a larger room with seating and prints on the wall. It has the feel and ambience of a local's pub, and it is no surprise that Rebus liked to relax over a pint here whilst in the midst of his ongoing war of attrition with his nemesis, Big Ger Cafferty.
It was a place I went to every day of the trip. I liked the place; the Jarl was excellent and even though different people were working the bar each time, they were unfailingly friendly and welcoming. I went in on one evening and a couple were playing folk music. A few people had come down from Fife and one guy got up and sung a song about one of the Kingdom's fishing villages. It made for a chilled out, relaxed evening.

Which is not what could be said about crossing the Royal Mile. Bus load upon bus load of tourists were deposited, where on the way up to the castle they were confronted with shops selling tartan, shortbread, and touristy tat with the skirl of the pipes a constant soundtrack. Fortunately my exposure to this world was mercifully limited, as my business lay either side of Lawnmarket. First port of call was the Jolly Judge, situated on St James Close, a 'close' being the local name of an alleyway or narrow path. This was another great pub, with a main room smaller than some micropubs, but with a good choice of beers on both cask and tap. I got a seat at the end of the bar and stopped for a couple of beers, enjoying a pint of Fyne Ales Hop Smuggler, and followed up with a half of Tempest Long White Cloud on tap, which at £2.60 a half was only slightly more expensive than the cask at the Cafe Royal! The Jolly Judge, despite a steady stream of visitors, was a pleasant oasis away from the bustle a few yards away, with excellent beer and the friendly staff which seems to be a local pre-requisite. 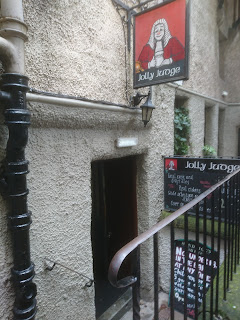 The next pub was the best of the trip, and also one that I had been in before. This was the Bow Bar (opening picture), on West Bow as it falls away towards Grassmarket. This is a timeless, one-room bar with unusual narrow tables, plus a great selection of beers and plenty of whiskies for the lover of the wee dram. I spotted a beer I had tried once before, at the Victorian in Halifax, which was The Pale Armadillo from Tempest Brewery of Galashiels. And this 3.8% hop-heavy beauty, with Amarillo and North American hops featuring in the mix was superb, and the best beer of the trip priced - by local standards - at a very reasonable £3.70. Definitely one of my best pints of the year. In fact, it was so good I had a second, enjoying the vibe of a bar whose calm and friendly atmosphere begs you to call in and linger a while.

Another highlight was Monty's, situated in the city's West End. Another smallish-bar with a great choice of beers on cask and tap. It was quiet when I called in one lunchtime, with just a guy on his laptop sat at the bar, who happily broke off to serve me a pint. I went for a pint on cask from another excellent Scottish brewery, New World Odyssey from Fallen, situated in rural Stirlingshire. This was one of the best of the trip, a 4.1% pale with Citra, Mosaic, and Saaz hops, very easy drinking with a citrus flavour and fruity aroma.
I didn't go in a bad pub during my time in the city. Others I enjoyed were the Blue Blazer off the Lothian Road, where the music on the jukebox/Spotify was excellent although the beer didn't quite hit the heights of some of the other places. The Halfway House on Fleshmarket Close - a title of a Rebus book - situated half way down a steep pathway was another decent spot, as was the Cloisters Bar situated in a pleasant suburban street at Tollcross. Even the Spoons I went in were above average, with the stunning Caley Picture House, based in a former art deco cinema on Lothian Road, with good beer (Isle of Skye Gold), the pick.

As I headed back down the stairs at Waverley Station to get my train back down south, I decided that I was going to make sure that I return to Edinburgh sooner rather than later.... 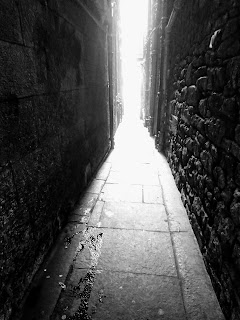