The County in Huddersfield has just been taken over by the Beerhouses Group, whose other pubs include the West Riding Refreshment Rooms in Dewsbury, the Buffet Bar in Stalybridge, and the Sportsman, also in Huddersfield. So one evening last week I went over to check it out and look in on a number of other places in the town.... 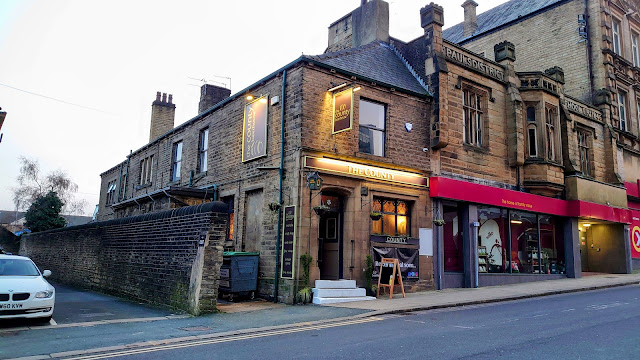 The County is situated in a quiet area of Huddersfield, just off the precinct below Wilkinsons and opposite one side of the town hall. It is one of those places that has never been on the real ale circuit and has just quietly seemed to have got on with its own business over the years. I had certainly never been in it before and so I had absolutely no pre-conceptions of what to expect when I visited.
The County is blessed with a narrow frontage at the end of a solid row of buildings on a slightly sloping street. The Beerhouses livery is on the signage, with freshly-painted white steps, and an old John Smiths lamp by the door and the Magnet design etched in the windows both hark back to former times. Hanging baskets add to the scene, and a warm orange glow emanates through the windows from within. In contrast to the Wilko's fascia that runs down from the top of the street to the County itself, the pub is sympathetic to the rather attractive nature of the original buildings.
The pub was quiet when I walked in with the only occupants the guy behind the bar and a solitary guy nursing a half on the opposite side. There were 6 handpumps in the middle of the bar featuring two beers from Ilkley, two from Nightjar, the now ubiquitous Landlord, and one from Little Critters. There were two banks of 4 fonts, featuring a number of keg beers, a cider, Paulaner, and, interestingly, I thought, Keller Pils from Bristol's Lost and Grounded. Mirror-backed shelves behind the bar feature a wide range of spirits and it seems there is something for everyone here. 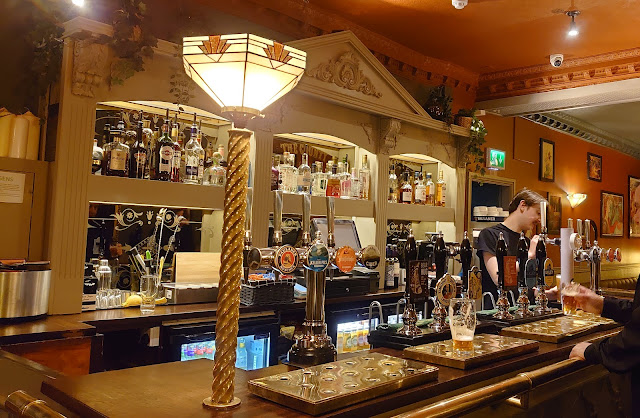 As you walk in, there is an attractive room to the right with padded banquette seating, tables, and stools. The walls are painted in grey and cream with a contrasting warm orange ceiling, with sympathetic light fittings and framed pictures, a theme that extends through the rest of the pub. The place looks classy, is comfortable, and welcoming. I ordered a pint of Ilkley Blonde, a beer I had not had for a long time, and got chatting to Joe, the lad behind the bar, and the guy with the half, who introduced himself but whose name I have forgotten! He told me that he had been coming in for years as he worked close by for the council, and real ale had never been much of a thing here in the past. The far area at the end of the bar had featured a now gone pool table and they regularly had karaoke evenings. In and amongst serving other people who had come in after me, Joe said they are planning to focus mainly on cask ales from Yorkshire, with a bit more variety on the keg side. They are looking to feature live music sometimes and appeal to event-goers at the town hall, so plan to offer cocktails. Anyway, back to the beer. It was OK, (NBSS 3), but I have to say that was a little bland for my palate. Rather better was the one Joe recommended, White Wolf, a 5% strong pale from Little Critters which was much more flavoursome and to my taste, and I rated that as a NBSS 3.5. 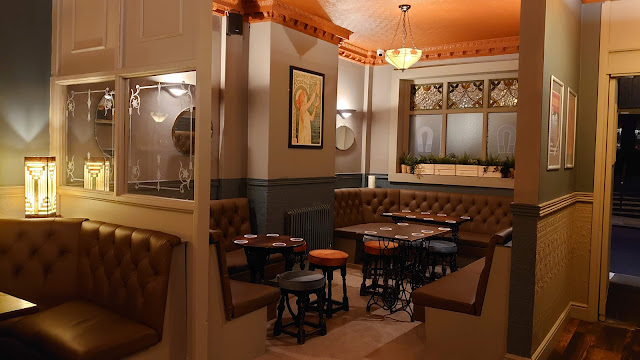 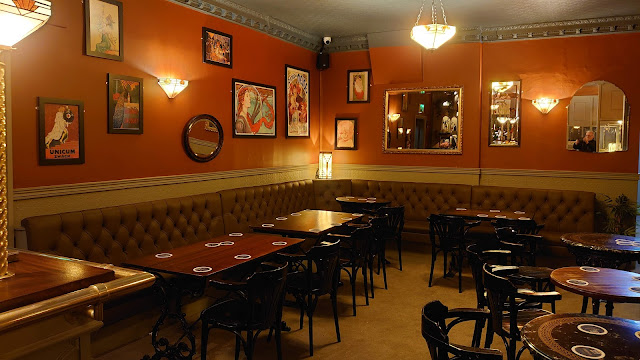 The County, which is being managed by John from the Sportsman, is well worth calling in based on this visit, and means that there is now a pub filling the gap in an area of town between the ones at the station end of town - Sportsman, Kings Head, Head of Steam - and the Rat and Ratchet end of town. It is obviously very new (it had been open less than a week when I called in), and I will pop in again in a few weeks to see how they are getting on.
I checked the train time, and realised I had to scale back my original ambitions. No chance of getting to the Grove or anywhere else too far away, so I abandoned that idea and called next at the Arcade Beers, on Station Street. I have always liked popping in this craft ale and bottle shop with its bare brick walls and industrial-look decor, and there were quite a few people dotted about in there when I arrived. From a wide-ranging board that also featured beers from the likes of Vocation, Lervig, Atom, Pentrich, and Zapato, I opted for a half of Against Community Guidelines, a 6% IPA from Deya, featuring wheat for extra body, and Citra, Strata, and Enigma hops which gave the beer some lovely refreshing citrus flavours. Very nice, but only a half on a school night!
From there, I headed to the original Beerhouses' spot in town, The Sportsman, which is something of a Huddersfield institution. I have been coming here for years, and I have always enjoyed visiting this classic, multi-roomed town pub with its Art Deco interior and beautiful curved bar. From the hand pumps, I ordered a half of Thornbridge Jaipur, which was on form, the bitter citrus notes well-balanced by an underlying sweetness, and I rated it as a 3.5 on the National Beer Scoring System. It isn't often I drink Jaipur these days, but this glass reminded me of its quality and status as one of our modern classic beers. I enjoyed it sat in the small room to the right of the bar, where I was the only occupant. It suddenly occurred to me that I hadn't seen any copies of the local CAMRA magazine, Ale Talk, for some time, and as I was leaving I asked the lad behind the bar, but he just shrugged and said he'd never seen it. I checked later on the local CAMRA branch's website, and it seems that publication is currently suspended, with the last edition having come out pre-lockdown. 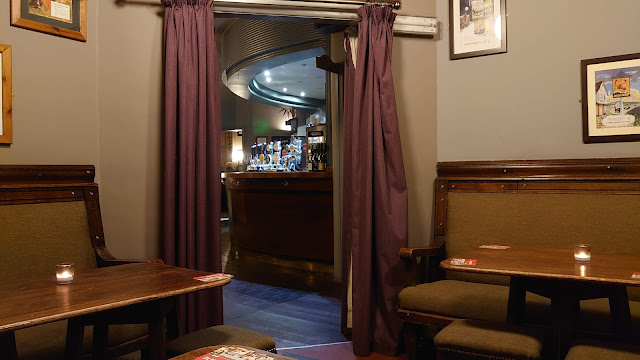 I re-traced my steps back towards the station, and made my way to The King's Head, situated on the right hand side of the station building as you approach via it via St George's Square, with its statue of one of Huddersfield's most famous sons, former Prime Minister Harold Wilson. The Grade 1-listed station must be unique in having two real ale pubs on its premises, with the town's Head of Steam occupying the space to the left of the main station entrance. The king depicted in the pub sign is none other than guitarist Jimi Hendrix, the pub re-named in his honour from its original appellation of the Station Tavern. I walked in, and there were quite a number of people sat in the main room, plus a few stood at the bar. I quite often have Ringmaster from Magic Rock when I go in, as it is invariably in excellent condition, but on this occasion I decided to go for something different. I opted for a Vellum from Beer Ink, which was a 4% hazy pale featuring Citra and Amarillo hops with grapefruit and mango flavours coming through. It was excellent, and I made it my beer of the evening (NBSS 4). It made me think that I really should pay the brewery a visit again, as I haven't been for several years, not long after they'd started out. The beers here tend to be a mix of local ones from the likes of Magic Rock, Bradfield, Lords, and Small World, plus others from such as Abbeydale, Taylors, Oakham, and Pictish on handpump, plus a few craft beers.
I sat with my pint in the room to the right of the bar, where a few more customers were sat enjoying a drink. There are faces I recognise every time I visit the King's Head, faces that have become familiar over the years, but we never speak. The pub underwent a lengthy and careful restoration a few years ago, and was transformed from a pretty basic boozer to the attractively decorated place it is now, with a tiled floor, wood panelling, and wood-burning stoves. In the main room there is a stage featuring live music on a Sunday afternoon, often featuring rock bands as you might expect given the pub sign! I haven't been for a few years, but I know it can get pretty busy when the music is on. 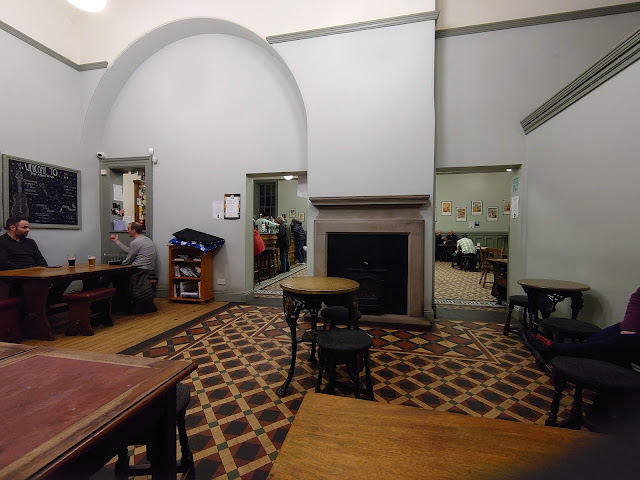 I finished my drink as it was getting time for the train. I'd had a pleasant couple of hours in Huddersfield, a place I used to visit regularly at one time, but over the past couple of years I just haven't made it. I certainly need to give the Grove a visit, and should certaimly call at the Rat and Ratchet. One place I used to visit quite regularly where sadly it isn't possible to visit at the moment is the Star at Folly Hall. The popular real ale pub got badly flooded a few weeks ago when some blocked drains in the road outside backed up, something obviously completely out of their control, leaving the pub seriously damaged and without electricity. A number of regulars immediately got together to help Sam and the team clean up the huge amount of mess left in the flooding's wake, and I wish them well in their efforts to get the Star back open again....
Follow me on twitter: @realalemusic