The Jolly Boys and Girls of Barnsley....

Last Saturday, I caught the train from Huddersfield passing through the attractive countryside and villages along the Penistone Line to Barnsley, a town I hadn't visited often before. I found a friendly, interesting town with some good beers and pubs and bars.... 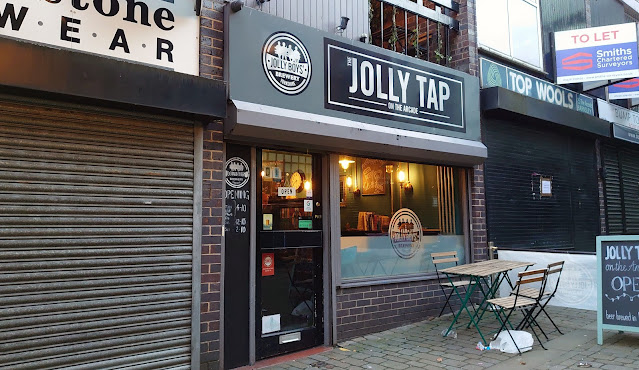 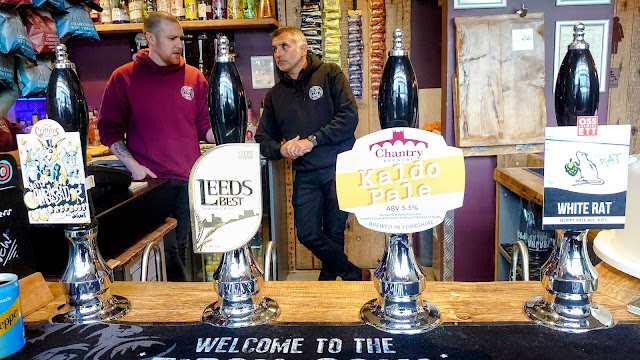 I retraced my steps back to the Town Hall, and then crossed over back on to Market Hill, this time heading off down the rather pleasant covered Victorian Arcade, despite their being a number of closed units and For Sale/To Let signs. There were lots open, though, shops, designer boutiques, cafe bars, and the odd bar, and there was a steady stream of people walking by.
My next port of call was down towards the bottom of the Arcade. It was another micropub, which had been opened in 2017 by the former Two Roses Brewery, and had been the first one in Barnsley. Jolly Tap on the Arcade (opening picture) has since been taken over by the local Jolly Boys Brewery, whose venture in Wakefield I only visited a few weeks ago. The bar is spread over two floors and when I arrived there were only a few people sat in downstairs. I ordered a pint of Blonde, which I'd enjoyed in Wakefield, from a range of predominantly their own beers on hand pump, although there was a guest from the 4Ts Brewery in Warrington. The beer was another good'un, another 3.5 NBSS rating. More people started to come in, with the two girls behind the bar cheerily serving them, a decent soundtrack playing behind. At one point one of the guys stood beside me at the bar mentioned juggling, and with that, one of the girls produced some juggling balls and proceeded to give a demonstration with nothing dropped. A conversation ensued about the art of juggling and the ideal weight of juggling balls. Splendid stuff! Pubs aren't all about the beer. I checked on my train time and realised I had more than enough time to try a pint. I ordered a pint of Supa Citra, a 4.2% ABV beer which someone said was a new one. Again, it was in great condition, and another 3.5 rating, which I slightly preferred it to the Blonde. A guy asked me if he could take the stool next to me as his missus was having her feet done and would probably need to sit down when she came in. There was a cracking atmosphere, everyone seemed to be in a good mood, the vibe set by the jolly juggling girl behind the bar, and a must-visit if in the town.
I'd noticed a vinyl shop across the way, which was closed anyway, but there didn't appear to be an entrance off the arcade. It turns out it is on the premises of the bar next door to it, Spiral City, which is a stylish modern split-level bar which apparently only opened in November 2021. It offers a couple of beers on cask and a few on tap, and was also very busy. A guy kindly let me in at the bar, and with my time before my train by now limited, I just ordered a half of, appropriately, Stancill Barnsley Bitter, as mentioned earlier. Malty, bitter, and copper-brown in colour, ironically it wasn't quite up to the standards of the previous beers I'd had, but still warranted a solid enough rating of 3.
It was only a few minutes walk back to the Interchange, where I found the train was a couple of minutes behind schedule, but soon I was sat on board, heading back up towards Huddersfield after a most enjoyable hour or two in a town which isn't far away, but wasn't one that I'd particularly thought about visiting before. But as I've found many times now, places you perhaps hadn't considered previously usually have something to offer, and in Barnsley there is much of interest, along with some good bars and beers....
*****************
And finally, I have a correction to make. It is a positive one, though. In my last piece, I referred to a number of pubs on the moors around Halifax and Calderdale that had closed. One of them was the Pack Horse at Widdop, but I have found out in the past few days that it has just re-opened under a new team, which is of course excellent news!
Follow me on twitter: @realalemusic