I re-visited Hebden Bridge this week for the first time in a while, and with a gig to go to, I took the opportunity to check out some of the town's fine hostelries.... 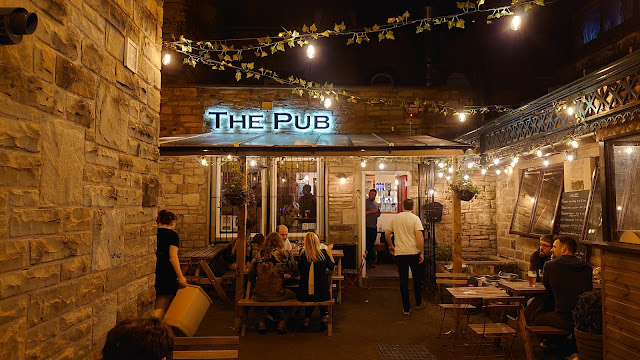 The last time I had visited Hebden Bridge was a few months ago just after pubs re-opened offering outdoor service only. I visited the Fox and Goose, the Pub, and Nightjar, but the visit was never included in a blog because I seem to recall I wanted to get a proper look at the Pub, which is the new name for the bar previously known as Calan's, once you were able to venture inside again. And that was something I planned to do when I called in again this weekend.
I had actually made a visit to Hebden one evening during last week. I had joined the Trades Club a few months ago as several gigs were being re-scheduled there, although many ended up being moved back again, but I had never collected my membership card, and with the first of these gigs re-scheduled for Saturday I thought it made sense so I could get beer at the membership rate. I collected my card at the bar without any fuss, and immediately took advantage of my new status with a (discounted) pint of Pale Eagle from Todmorden's Eagles Crag brewery. I sat in the bar, which was pretty busy with plenty of friendly folk, and enjoyed my pint. There was a menu on the table featuring a range of Thai and Indonesian curries, and the various plates that were ferried to adjacent tables looked pretty appetising. So inevitably I headed to a nearby open door which led into a small kitchen, ordered a red chicken curry, and after a little while, by which time I was on pint #2, my curry was delivered. And very nice it was too. I lingered over the rest of my pint, looking forward to my next visit in a few days time, but then it was time to go.
I had time for one more visit before getting the bus back home, and so I went to the nearest option which was Nightar, situated in the lower right hand part of the Picture House building. The bar was quiet and dimly-lit when I went in, there were a couple sat at one table, and the lad who was manning the bar was sat in the shadows at another table on the other side of the room, but leapt to his feet and came over when I approached. I ordered one from the cask choice, one of their single hop range, At One with Mosaic, a pleasant dry 3.9% pale with fruity berry and mango notes. The bar is the tap house of the nearby Nightjar brewery, whose owner also has the Exchange Beer House in Bradford. The brewery have become a dependable source of decent cask and keg beers, and along with other local brewers, Elland and Goose Eye in particular, have a good reputation for their service with many of the local bars, meaning they are regularly to be seen in these parts and beyond.
Saturday came around, and following some excellent football at The Shay where Halifax Town beat Stockport County 3-0, and some excellent Factotum from Pomona Island at the Meandering Bear, I boarded a train from Halifax. Ten minutes later, I alighted at Hebden Bridge, and in another ten minutes or so I was at Vocation & Co, sampling a half of a new beer from the brewery, New Musick, a 4% hazy pale, which I thought was reminiscent of Hazy Jane from that Aberdeen-based brewery that's not Fierce. Incidentally, the core range of Heart & Soul, Pride & Joy, Bread & Butter, etc. are undergoing a makeover. There are new pump clips and can designs, which I think look good and more modern. Beware though, Pride & Joy is to be brewed to a lower 4.8% ABV rather than the 5.3% it has been previously. It isn't out yet, so we will just have to wait to find out if it impacts on the flavour.
I had of course a gig to go to, so I was on a tight schedule. I decided I would visit Drink next, which I hadn't been in since before lockdown as it has not fully opened up until fairly recently. And during the closure they have made use of the time and knocked through and opened up some extra space upstairs. Downstairs they have installed some large glass-doored fridges downstairs for a wide selection of cans and bottles from an array of the best brewers around, whilst the bar is pretty much as it was. And I have to say it all looks pretty impressive, the crew were all very welcoming, and plenty of people were enjoying a drink there when I called in. I had another Deya beer off the taps, which was very good although I have forgotten what it was! In summary, Drink is well worth including in any visit to Hebden Bridge. 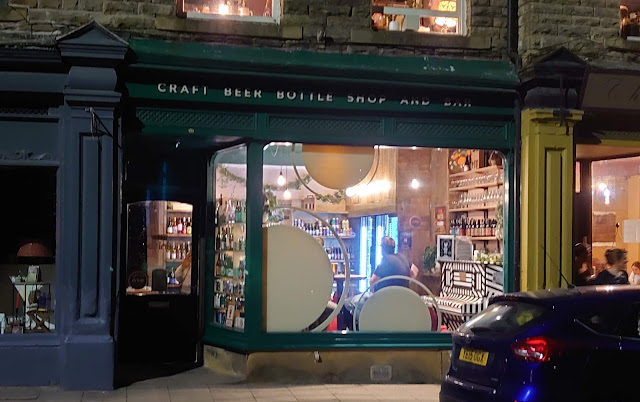 From Drink, I made the short walk across town to The Pub (opening picture), now run by the people who have the excellent place of the same name in Todmorden. I have to admit it is strange after visiting so many times in its Calans days and not seeing any of Alan and Alyson, or Nadine and Damian, who all became friends during their respective tenures, behind the bar. The layout has changed too, with the former seating area to the right of the bar now incorporated into the bar itself. Alongside the hand pumps there are a number of taps. But they have made something of the outside, with more cover and seating so that the capacity has increased, although how it will work on a cold winter's day remains to be seen. Overall though, it is another place that you need to visit when in Hebden Bridge.
Next up, it was time for the gig at the Trades Club. I had come to see Norwegian indie iconoclasts Pom Poko, who I have enjoyed listening to on Marc Riley's 6 Music show over the past few years. They are a band that defy being categorised, their stop-start tunes ranging from grunge to heavy prog-like grinding riffs, with a battering drum assault, and then within an instant switching to a nursery rhyme-like sing-along chorus with everything else subdued. The band were energetic, full of good humour, exhilarating, clearly happy to be playing to an audience, and after a couple of recent stadium gigs, it made a refreshing change to be back at a smaller venue. It was a fantastic gig, and it was great to be back at such a wonderful and iconic place.
I had bought a pint before the gig with my newly-acquired member's card, a pint of Stod Fold Gold, but it was the only one I had as the music took over. It was great to re-visit Hebden Bridge, and if you are looking for somewhere to go, aside from the gigs at the Trades Club which has consistently punched above its weight in terms of attracting artists, there are plenty of artisan shops, places to eat, and some wonderful pubs and bars. And after all the frustrating months of lockdown and the intervening twilight times, this visit to the town certainly hit the spot....
And here are Pom Poko with Like a Lady....
Follow me on twitter: @realalemusic