A stylish new bar has just opened in Halifax, and early indications are that it will quickly become an important part of the West Yorkshire town's burgeoning and vibrant bar scene. And as you might expect I have been along to check it out.... 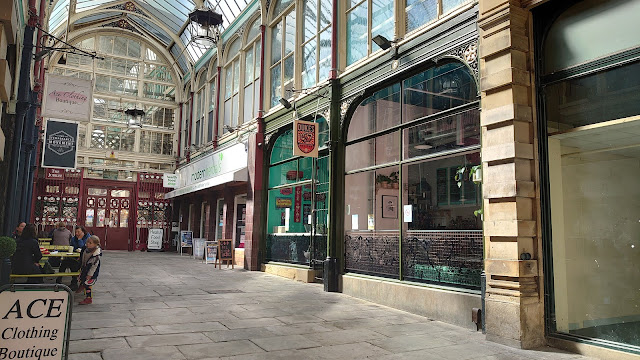 There can't be many bars across the country that actually opened their doors for the first time ever immediately after lockdown eased last month, but that is exactly the situation with Dukes Halifax, which is situated on Russell Arcade near the northern entrance of the town's beautiful Victorian market, just across from the excellent Temperance Movement cafe. The plan had been that owners Sean and Elly would sign for the former charity shop on the day the first lockdown was announced in March last year, but it was actually August before they were finally able to put pen to paper.
Over the subsequent months, the building was slowly transformed into a classy and tasteful bar, with vibrant colours, light wood, exposed brickwork, and potted plants alongside the huge windows that run along the front of both levels of the bar. Tasteful prints and signs feature on the walls, with wooden stools and tables, and counters and stools by the windows to enable a view over the arcade as you enjoy a drink. With natural light from the arcade's glass roof and the high ceilings of the bar, the place has a light and airy feel to it. And whilst Sean and Elly opened up for a short time during lockdown and sold craft bottled beers and other items to take away, it was April 15th before they finally opened the doors as a bar, with a number of tables out front in the arcade. And so far they have had a steady stream of visitors, a mix of pre-booked and walk-ups.

I first met Sean a few years ago when he worked at Drink? in Hebden Bridge, the off-licence-cum-bar where he worked with owner Martin Ogley. Both were friendly, Sean the chatty one, Martin quiet until you got to know him, and the double act worked very well together and I enjoyed my regular visits and chats with both of them about beer and pubs. I first came across Elly when she was manager at Vocation and Co, a few minutes walk away along the main road towards the station. The couple, who are married and live in Mytholmroyd, worked together at a pop-up bar in Hebden Bridge and also ran a bar in Todmorden, but Dukes is a much bigger venture. 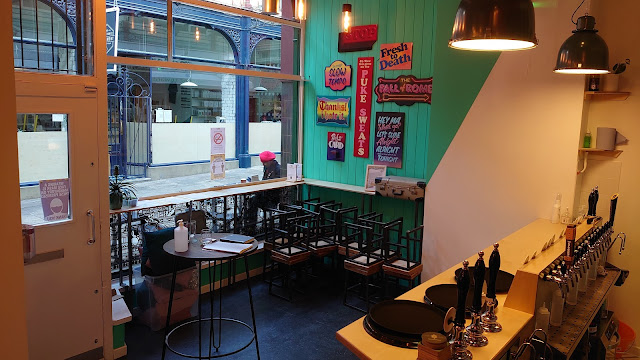 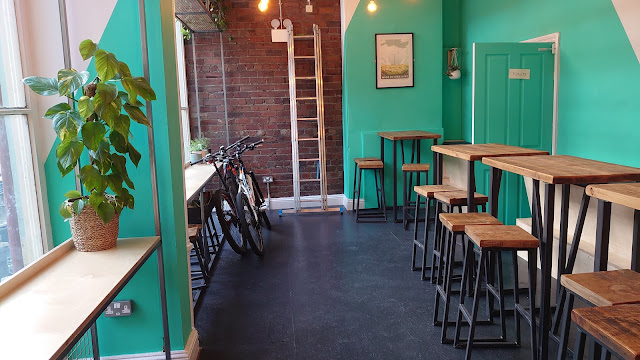 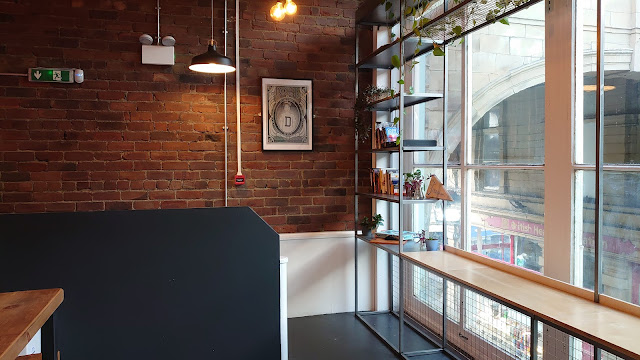 The beer list has also been pretty impressive when I have visited. There were two cask beers on when I called in last week, from Northern Monk and Anthology, with a Pale from Macclesfield's Redwillow - a brewery not often seen in the town - waiting in the wings. The 4.1% Eternal from Northern Monk was refreshing and brimming with citrussy notes and on excellent form. The keg list is more extensive and again included a number of breweries that aren't regularly seen in town. Amongst a line-up featuring Thornbridge, Wild Beer Co, Beatnitz Republic, and Tiny Rebel were beers from Dig Brew, Vault City, Rivington, and Mobberley Brewhouse. I tried a Bucktoothed & Toothless, a 6% West Coast IPA from highly-rated Lancashire brewers Rivington, and it was deliciously hoppy and resinous. 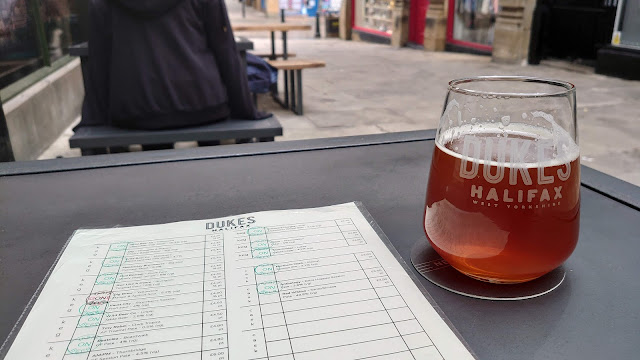 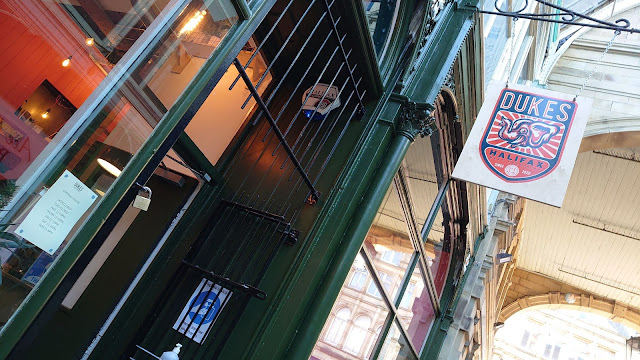 I asked Sean where they had got the name from. Was it a reference to the Duke of Wellington's Regiment, who were based in the town and who are commemorated by a striking 18ft bronze sculpture only yards away? There was something vaguely familiar about the cartoon of an elephant's head on the bar sign, and indeed some of the logos associated with the Regiment featured an elephant. However,  Sean told me that it was actually the logo of the Halifax Dukes, the speedway team that were based at The Shay from 1949-1951 and then again from 1965-1985, before they re-located a few miles away to the Odsal Stadium in Bradford. The team had its successes, in 1966 they won the league and they drew large crowds to The Shay for a number of years. I only went a few times myself, but I remember the noise and the smell of the bikes, and how if you stood close to the front you had to duck as the bikes went past to avoid being hit by a spray of cinders stirred up in their wake. There is still a residual fondness in the area for the speedway team, and apparently one of Elly's relations is a big fan. And so Dukes Halifax was named! 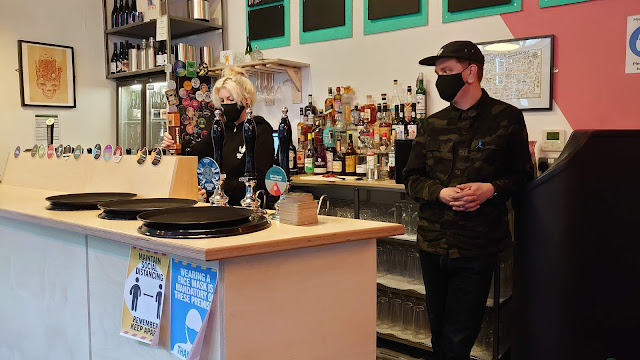 So that is a quick look at Halifax's latest bar, and I have to say I am very impressed with what Sean and Elly have done, and I would like to wish them well in this new venture. It also fills a gap of a few minutes' walk between the Grayston Unity situated opposite the town hall and the Meandering Bear/Kobenhaven/Victorian Craft Beer Cafe/Lantern end of the town. Dukes is set to become another serious destination in a town with some excellent bars, and with new interiors to be unveiled at both the Grayston and Victorian when venues can open inside, there is plenty for the town's regulars and visitors alike to get excited about as things gradually move closer to normal....