From Shoreditch to The Ditch?

Current government-imposed restrictions and the ongoing failure to deal with the impact of Covid-19 pose an existential threat to the way of life of huge swarthes of the country. Here's some thoughts.... 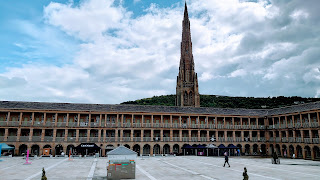 A few years ago, someone used the phrase 'Shoreditch of the North' to describe Halifax. This was a recognition that the down-to-earth, no-nonsense former mill town nestling amidst the Pennine moors had re-invented itself as a centre of culture and cool, with trendy bars, a lively arts scene, and the re-birth of the town's astonishing 18th century former cloth hall, the Piece Hall, all set in a town with some stunning buildings and an award-winning Victorian market. Newspapers such as The Guardian and Telegraph despatched reporters to the town to see what the fuss was about, for some no doubt an exercise in bandwagon-jumping, and the town was suddenly the place that everyone wanted to be. Halifax was cool. My town was cool. The Halifax Festival of Words was launched in 2018 as an annual event (sadly Covid-19 scuppered the 3rd one that was due to be held this month). Live music featuring a quality of different artists not seen in the town on a regular basis for years came to Halifax in venues like The Grayston Unity, The Lantern, Square Chapel, and the Piece Hall. Tourists began to visit the town in increasing numbers, particularly as another award-winning TV series from locally-born writer Sally Wainwright focussed the spotlight on Anne Lister, aka Gentleman Jack, the 19th century landowner and diarist who lived at Shibden Hall, situated on a hillside just outside the town. Not everyone was convinced about this newly-found attention, though; one of my more cynical friends dismissed the Shoreditch comparisons and suggested that 'ditch' was more appropriate, harking back to former times when such a description would perhaps have been more fitting for a town that was lagging behind local rivals and had increasingly less of interest to attract the local and visitor alike.

When the coronavirus began to hit earlier this year everything ground to a halt. The bars, pubs, and restaurants had to close for nearly 4 months. Shops closed. The Piece Hall had to close. Worse still, the Square Chapel Arts Venue was forced to shut down due to financial issues. A cold wind blew through the town again, at odds with the warm spring sunshine that was such a feature of this screwed-up year.
Lockdown eased in the summer months, cases of Covid had fallen significantly, and so at the beginning of July, pubs, and other venues and businesses started to re-open. The government had been banging on about track and trace for months bandying about phrases like 'world-beating' but consistently failing to deliver. Schools went back in September with universities following on and the infection rates started to creep up, both settings regularly the breeding ground for colds and flu, and so no real surprise that Covid would start to re-surface here. 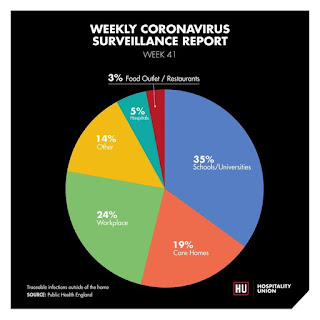 And yet as the clamour for action from the government has grown, it is the hospitality sector that has been singled out as being the biggest source of infection. But in actual fact, schools and universities lead the way in the graphic above with 35% of cases, followed by 24% in workplaces - with several large outbreaks in single places, 19% in care homes, pubs are grouped in with hospitality at just 3%. The government has said it won't close schools, university students are left in a world of online tuition and isolation in non-descript halls of residence, and they daren't risk closing workplaces. Even allowing for a margin of error, this shows that pubs are well down in the list of sources of infection. Which is not surprising given the amount of effort made by hospitality venues to make their sites safe. I have been in a large number of venues over the past 3 months and as regular readers will have hopefully noted I have been very impressed with the way pubs have responded to the requirements to create a safe environment for their customers; customer details taken, plenty of sanitiser, table service, masks when stood up, one-way systems, the odd temperature check, maintaining social distancing, keeping different households apart...the list goes on. It has cost them a lot financially as well - fewer customers allowed in due to social distancing, the cost of additional protection like face masks and screens, extra staff to provide table service, shorter hours due to the ill-thought out 10pm curfew. Not surprisingly some venues have decided it isn't worth opening yet - such as the Jubilee Refreshment Rooms in Sowerby Bridge, or have reduced the days on which they open, or have closed down completely. And it's not just the small operators, either; leading pub groups Greene King have announced closures and job losses, and M & B, who operate Toby Carvery, All Bar One, and Nicholsons have given notice of their intention to consult with employees over redundancies.
And so we have had the anxiety, resignation, fear, and anger over the past few days whereby government leaks appeared in the newspapers suggesting that pubs would be closed to deal with the increase in cases. Totally unacceptable, orders cancelled with breweries, plans changed, or put on hold. Yet another example the sloppy approach to the release of information, as in the end it was announced earlier this week that only pubs in the Liverpool region would have to close as part of the area's designation as being in Tier 3, the highest level. Even there, though, you can still go to your local Wetherspoons and other pubs with a substantial food offer as the clever Covid virus can apparently differentiate between wet-led pubs and those where food is served, showing that Big Tim has still got the ear of those in charge.
A big factor in all of this has to be the incompetence of this government who have dithered, swayed, u-turned, played fast and loose with the rules they set themselves, put faith in systems and programmes more often than not that have been out-sourced to favoured private companies that have then failed to deliver. I could go on. All around the country, people are paying for this. Financial support has been gradually reduced and whilst the government has understandably wanted to keep the economy and jobs going, its failure to get a grip on the virus has meant the country is lurching almost inescapably towards another dark period. There has been too much self-interest, a lack of leadership, a complete absence of empathy, and sheer incompetence that have brought us to where we are now.
And for towns and communities up and down the country like Halifax it simply isn't good enough. The town, like the rest of Calderdale, has been allocated to Tier 2, with virtually the same restrictions as when they went into local lockdown, except that in a possible nod to the upcoming Halloween and bonfire season it is now possible for up to 6 people to meet outside in a private garden. When you consider that the rate of infection in the Prime Minister's local lockdown-free Hillingdon constituency the other day was more than twice what it was in Calderdale and other northern areas when local lockdown was imposed weeks ago, it reeks of us and them.

There have been some positives in recent days; government funding for many venues including locally the Grayston Unity and the Trades Club in Hebden Bridge, a grant of almost £1 million for the Piece Hall, which gives them a tremendous boost. Square Chapel has new owners. But, overall the current position is one of ongoing uncertainty and deep concern. It is a worrying time for pub landlords, business owners, their teams, customers, venues, and anyone who cares about the people and the town. I don't want to go into my town and see closed premises, boarded up shops, and deserted streets. This town, like so many up and down the country, deserves more.
And of course, I don't want my cynical friend to be able to justifiably refer to Halifax again as a ditch.... 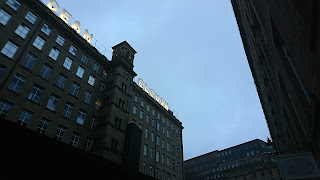