That Special Kind Of Place....

The temporary closure of one of Halifax's best-loved bars got me thinking about what it is that makes a pub a special kind of place.... 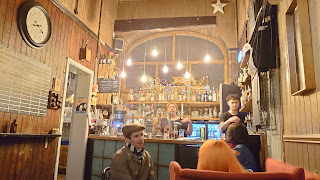 Last week, The Grayston Unity in Halifax announced that it had been successful in its bid to obtain Arts Council funding due to the ongoing disruption caused by Covid-19. The bar, home to the UK's smallest licenced music venue with an indoor capacity of just 18, was one of several in the area like the Trades Club in Hebden Bridge and the Brudenell in Leeds who had been successful. However, they also announced that they would, bar the odd pop-up opening, be closing until 2021, although their sister bar across town, the Meandering Bear will remain open as long as it is practical given the current uncertainty. They announced that the final shift would take place last Tuesday and when I popped in for a quick pint early evening, the bar was as full as it could be in these days of social distancing and reduced capacities. The fact that I knew virtually everyone in there was a sure sign that like me that had all come to have a farewell drink in the bar that has etched a place in the heart of so many people within the town and from further afield.
With its alter ego as a music venue, The Grayston isn't your typical pub, of course. I decided to pull together a selection of some of the pictures I have taken of the place and events since it was first opened  by Michael Ainsworth in May 2016 and share them on Facebook, and in doing so I was reminded of the calibre of some of the visitors that have crossed the threshold during that intervening period. People such as Nadine Shah, John Robb, author and leader of the Membranes, The Orielles, Working Men's Club, Philip Selway from Radiohead, James Endeacott, DJ, industry legend and the man who discovered The Libertines, folk-blues legend Michael Chapman, grime artist Novelist, The Blue Orchids, Sybil Bell, the founder of Independent Venue Week, authors Ben Myers and Adelle Stripe, folk luminaries Katie Spencer and Henry Parker, St Etienne's Bob Stanley, BBC radio presenter Elizabeth Alker, Canadian band The Burning Hell, and countless more. And for some of these like James, Sybil, and the Orielles, it is their default place to visit when they return to the town, drawn no doubt like so many by the fact that the bar is greater than the sum of its parts.
Even without the lure of the events - which range from music through spoken word to photo exhibitions to talks - the Grayston is something special. Yes, the staff are very friendly, beer is good, the gin selection is vast, the pork pies pretty decent, the soundtrack can be amazing, and it attracts an eclectic mix of customers. I have made a lot of friends and met some really interesting people there. The Grayston has got a character of its own, it's not just that first pub that you call in as you hit town, or the last one before you get the bus home, it is one that can keep you there in between and keeps drawing you back the next time. The quirky decor, the venue with its auntie's sitting room chic, are all unlike anywhere else you'll have ever been. Piles of books on the mantlepiece, a green guitar on the wall. As the evenings draw in, the lights of the main bar take on a luminescence of their own, picking out the colours of the bottles of spirits on the shelves behind the bar, enticing the passing visitor walking beside the town hall along the otherwise dark Wesley Street. 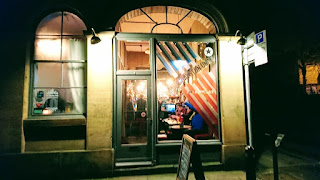 And so over the coming months I will miss The Grayston, who have made the decision themselves, but with the growing threat of local lockdowns, 'circuit breakers', 'firebreaks, and other inconveniences brought about by the Covid situation, it is likely that many people will be experiencing or anticipating that feeling of loss about their own special place or places. Whether it is the company, the beer, a bolthole, a place to relax, a place to play pool or maybe a game of darts, the craic, the chance to watch the football on TV - the pub means a variety of different things to different people and without the opportunity to visit our lives, if not our pockets, are all the poorer. And for some people, myself included, different pubs mean different things at different times - you go there for a quiet pint, there to see your mates, etc. It is a place to let off steam, to put the world to rights (how ironic in this disrupted year for normal pub visiting that there has been such a wealth of material!), to talk utter rubbish, to laugh until the tears run down your face.
It is somewhat frustrating to have to be going over this all again having had a spring and part of the summer when we had to leave the pub behind. And whilst the whole pub-going experience has changed since they re-opened and it has become a more structured process, it has still been better than not being able to visit them at all. But many people have already given up on them, or so it seems; a report in today's Morning Advertiser said that sales in wet-led pubs were down by over 22% in September, and a survey of UK Hospitality, the British Beer and Pub Association, and British Institute of Innkeeping members suggests that 750,000 jobs in hospitality could be lost by February 2021 without additional government support whilst at the same time the government continues to bash the hospitality sector disproportionally. And on the ground, very few business owners would say that visitor numbers have got anywhere close to pre-Covid levels, and one pub manager I was talking to today said business "has fallen off a cliff". Reduced opening hours, the rule of 6 or worse, depending where you live, having to give your contact details, genuine fears of catching the virus have all contributed in driving people away. And in doing so, many businesses are struggling and a big worry is that many won't make it though a winter of disruption, or that they will simply chuck the towel in having had enough.
And so sadly in a week when Greater Manchester has just been moved to join Merseyside and Lancashire in Tier 3, Cumbrian brewers Fell launched a 5.2% DDH Pale featuring Mosaic and Cryo Chinook hops called It Will All End in Tiers (and thus scuppering my use of the phrase as a blog title!),  the 2021 CAMRA Good Beer Guide was released to Privilege Club members before its official publication on 29th October. It is hard not to suspect that many of the pubs that are featured in its pages this time won't be around for long enough to welcome the increased visitor numbers that this accolade normally brings in. Let's just keep our fingers crossed though that our special place(s) will still be there to welcome us back....
Follow me on twitter: @realalemusic