The Random, The Company, and The Laugh....

July 19, 2020
As the pubs hit the fortnight mark since they were allowed to re-open, there are signs that amidst the check-ins, the one-way systems, and the plastic screens, some things are returning to a kind of normal.... 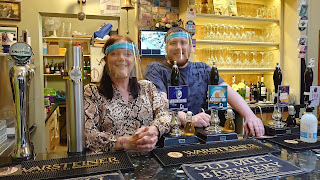 "Quiet".That has been pretty much the universal answer from each establishment I have visited over the past week or two when I have asked how busy they have been. The odd one may have added a comment like "Saturday was steady away" or "Monday was actually pretty good for a Monday" but the consensus seems to be that it has been pretty quiet for most pubs since le grand réouverture, with many customers having not yet ventured back. And that view was backed up by a report in the Morning Advertiser which suggested that business was down by 40% in the first week back compared to the same week last year.

I can't say I have visited too many different places but they do seem to be each slipping into their own rhythm, and I haven't found any that haven't been welcoming. Only once have I been denied entry, and that was only because the bar in question was expecting a group to arrive imminently who had booked what turned out to be the last remaining table. The rejection though was meted out with such sympathy and sensitivity that my overwhelming feeling was one of appreciation for the great work that so many bar staff do to make us feel welcome. How lucky I was to not be able to get a drink.
A week later, I walked from Todmorden to Hebden Bridge. I had intended to call in at Calan's when I got to Hebden, the popular micro having opened a few days ago, but when I got there I spotted a sign saying it was at full capacity, so I moved on to Vocation & Co to chance my luck. And, at the second time of asking after failing to get in last time, I managed to gain entry and I can offer nothing but praise. Friendly, efficient service from your seat, and as luck would have it I ended up in my favoured spot, on one of the tall stools facing the bar. I ordered a pint of Heart and Soul which was most welcome after walking from Todmorden. This pale, citrussy ale was refreshing and in great form as you would expect it to be in a bar which is essentially the brewery tap. I followed that with another one, and then I decided to try a beer from one of the keg lines. I opted for Signature, a hazy 5.5% IPA from Cornish brewers, Verdant, which was excellent. The atmosphere here was very agreeable, the service from the friendly staff was calm and efficient, and whilst the number of lines was reduced from 20 to 14, and the kitchen is currently closed, there is still plenty to draw in locals and visitors alike.
I have been impressed with the way some of the smaller places I have visited such as the Market Tavern in Brighouse and the Grayston Unity in Halifax have adapted their layout and the positioning of tables to maintain a distance without compromising on their friendly welcome. It helps that both have outdoor space, of course, although typically the weather since pubs re-opened has been pretty poor after weeks of wonderful weather at the height of lockdown. The Dusty Miller at Hove Edge has a one-way system through the pub, and here you sign in by texting your name to the pub; I have started doing this before I leave home as I live that close. Here again, the welcome is as friendly as ever, the team cheerfully delivering the drinks to the former bar-hangers like myself who are now dispersed to all corners of the pub.

I realised one of the big things I had missed about the pub the other week when I was in conversation with one of the regulars and his wife at the Market Tavern. We were reminiscing about some of the old pubs in Leeds. I had noticed a guy across the room taking an interest in what we were talking about, and having held back long enough, waited for a pause, said "Excuse me, I couldn't help hearing..." and came up with a few memories of his own. It was that randomness of conversation, the way that the pub throws strangers together, the way a visit can develop its own twists and turns that I realised I had missed during our enforced absence. That, the company, and those hilarious, often totally daft, conversations where you end up with tears of laughter streaming down your face. And, of course, the quality of a proper hand-pulled pint, with the Abbeydale Moonshine that was on that day at the Tavern absolutely spot on and the best I have had since lockdown.
And yesterday, I was back at The Grayston Unity where there was the additional attraction of pop-up Lebanese street food from Hey Schwarma. The place was pretty busy and there was a real mix of people out the back when I went out with my pint, many that I knew; lads from football, Grayston regulars and returnees, friends from Zoom now restored to their physical entities, and a few others. And after a few decent pints of Chinook and some wonderful Farmhouse IPA on keg from Rigg and Furrow. I headed off home clutching my Chicken Schwarma, having had an excellent afternoon full of conversation and laughter and good company.

Yes, it has been quiet so far, but it does seem that at last, amidst the signing-in, the sanitisers, and the screens, the random normality is starting to return....