The Day of The Slight Return....

July 10, 2020
The pubs - or at least some of them - opened up again last weekend. So face mask appropriately donned and hands sanitised, your intrepid blogger caught the bus into town to check out the situation.... 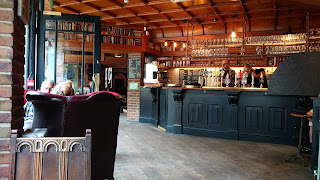 Halifax was busier than it had been on the few previous Saturdays when I had been there during lockdown. It had had a weird atmosphere in those early days, a few people trying to cling to the last vestiges of life before the curtain came down, as the few shops remaining open tried to get their heads around the new-fangled concepts of organising queuing and social distancing. Familiar, favourite, places were closed, with no indication of when they would open their doors again, if ever. The town was enveloped in a post-apocalyptic gloom, which a few years ago would have been how the less charitable may have said it presented itself to anyone casually visiting the place. But in 2020? Halifax, revitalised by the Piece Hall, a new breed of bars and small businesses, a touchstone of town centre rebirth? Yes, the Shoreditch of the North had run aground, caught up in the pandemic that brought the world to a shuddering halt.

As the shutters came down, we retreated to our suburbs, our nooks, our crannies. Beer was ordered online from an increasing number of breweries and bars. We drank our beer and re-connected with life at home. We joined in Zoom meet-ups and quizzes as we drank our beer at home. But, finally, last Saturday was the day we could order a beer in a pub and drink it there for the first time in over 3 months. A BIG DAY INDEED.
I had arranged to meet some of the lads I go to football with at The Grayston Unity. I was a few minutes early, owner Michael was outside, meeting and greeting beside the social distancing markers. Contact details were given, hands sanitised, and then it was in to the small bar, the familiar furniture removed, replaced by marker tape at strategic intervals on the floor. Plastic screens had been placed on the bar from behind which Steve and Vic were sorting out the drinks. It was all very efficient, familiar, friendly, but different. I ordered a pint of Windermere Iti, my first post-lockdown pint in a pub, and followed the one-way system out to the yard at the back.
There were already a few outside, some in the yard and some sat at tables in the extended drinking area which now runs the length of the town hall, the forecast rain not presently in evidence. Gradually the lads appeared, some resplendent with their lockdown locks, each bursting to tell their tales of how they'd coped since we'd last been able to meet. Although it wasn't particularly busy, plenty of familiar faces appeared to check things out. Someone said to me that the thing that stood out the most was the sound of groups of people chatting, a sound that they'd not heard for months. And I couldn't disagree; apart from an initial cacophony when people were trying to get used to Zoom or Teams before they picked up the etiquette and manners of video meetings, it had been a pretty quiet period in terms of talking with other people.

Not everywhere had opened in town; of the regular haunts, the Lantern, the Alexandra, and the Three Pigeons hadn't announced when they would open their doors again. And over the hill in Huddersfield, news had just broken that sadly one of the town's favourite bars, Mallinson's Corner Bar, would not be reopening. This has always been a great place to call in whenever I have been over there, but sadly they came to the conclusion that with the layout of the bar and the lack of outside space it was simply not viable for them to open in the light of the current social distancing requirements. Whilst Mallinsons are continuing to brew as normal and deliver their popular beers as the world creeps back to a kind of normality, I would like to pass on my very best wishes to Sam and the rest of the Corner team for the future.

Meanwhile, back in Halifax, one place that was open was København, which had taken advantage of the outdoor space in Westgate Arcade by filling the area in front and beyond their bar with benches and tables. They were quite well-occupied when we got there. I ordered a pint of Turning Point Sci-fi Lullaby, a wonderful, fruity 4.6% Session IPA, featuring Ekuanot, Chinook, and Simcoe hops, which was my beer of the weekend. It was one of three cask ales on, which is less than normal, but not surprising with many brewers only just returning to brewing cask, and it seemed that choices were limited generally. And like the Grayston, the atmosphere was all pretty relaxed. 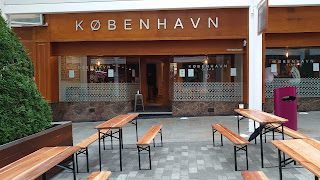 We moved on, to København's sister bar, the Victorian Craft Beer Cafe, a few minutes walk away. Here furniture had been cleared out, it was table service only, and there were beer menus on the table. There were friendly greetings from the staff. I got chatting to a couple I hadn't seen since before the lockdown and then sat at one of the few remaining downstairs tables where I had a half of Siren Refractions Session IPA on keg, hazy and a very drinkable 4.2% which had been quickly brought to my table. It was pretty quiet, the curious coming and going, the murmur of conversations from distant tables in the background.

It was then back to the Grayston, a pint of Shindigger on keg which was very pleasant, another 4.2% session ale, before I went off to get the bus home. It had been good to see everyone who was out and about again, although there were a number of notable absentees who didn't yet feel that the time was right for them.

I was away home by 6.30. Everywhere seemed to have coped well, it was all pretty relaxed, but at the same time the day as a whole felt a bit strange. The limits of lockdown had been extended, some of the structure of the past months had gone. And, whether it was all the talking, the fact I was drinking beer away from home, I don't know, but I have to say I was knackered that evening, headed off to bed early, and slept like a log.

Still, that was one target achieved. Next up, it was getting a much-needed hair cut.... 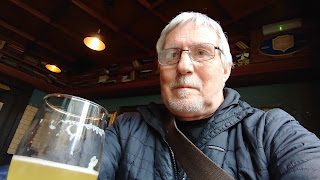