No Free Nuts, No Skulking Loafers....

June 29, 2020
And so the announcement came and pubs can open from the 4th of July, although there remains a lot of uncertainty about how it is all going to work.... 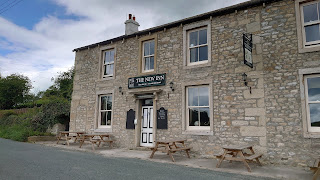 There has been a great deal of speculation over this past week about what pubs will look like when they re-open: booking in advance, signing in, having your temperature checked, leaving your contact details, ordering via an app, table service, contactless payments only, one-way systems, outdoors only, no standing at the bar, no standing in the bar, one at a time in the toilet, disposable menus, face masks to be worn at all times, keep-to-two-metres-if-possible-but-if-not-it's-ok, no bowls of free nuts on the bar, no newspapers or magazines to be shared by pub users, sanitising each table every hour, pool tables to be out of bounds (apparently the ball is a "vector of disease"), etc, etc. Some of those listed I may have imagined, but I am sure that for many of those responsible for running pubs and bars who managed to wade through all of the 43 pages of the government's advice published in the wake of last Tuesday's announcement there will be a lot of questions that remain unanswered.
The simple fact is that for most places it will be a question of interpreting the guidelines as best they can, playing it by ear, tweaking as they go along, and doing their best. That is no doubt one reason why many places have decided to wait before opening as they need more time to assess how they can practically do it even with the reduction in social distancing to the very specific one metre plus. Another is the fact that opening up on a Saturday of all days rather than say a Monday which would have enabled bar managers and their staff to work out when it's likely to be quiet the best ways of coping with the new guidelines before the anticipated weekend rush. Some are no doubt worried that the worst of the British pack mentality displayed over the past week in places like Bournemouth and Ilkley will rear its ugly head again on the first day in over 3 months that people have been legally allowed to drink in a pub, and so want no part of it. And no doubt there will be some who will be opening who will be wondering how many of their customers will be returning.

Whilst there will be some for whom the 4th can't come quick enough, there will be concerns amongst many customers too. Having become accustomed to drinking at home and in their gardens during the incredible lockdown weather we have had, many won't be in a rush to change their routines, at least until the dust has settled. Plenty of people will worry that it is too soon, the virus may flare up again, worried that others will not keep their distance. Plenty of them may be put off by all the speculation as to what the new normal in the pub will look like, which is understandable. Some of the statements used by the government and media have come across as saying that pubs are just like restaurants, the stupidity of which has irritated me and no doubt others. Will it be too regimented? Will it be too impersonal? Will it be too busy? Will it be full of idiots? Will I be able to sit with my mates? And so on, I think we will all have some questions of our own.
The lockdown has meant though that virtually all of us have had to make some pretty significant changes to our erstwhile lifestyles. We've had to get used to queueing at the supermarket, keep away from families and friends, adapt to working from home, stop going to the gym (obviously no change there in my case!), etc. Masks have been donned, hands sanitised, hugs and handshakes resisted. Weddings have been re-arranged, holidays postponed, sport put on hold. But we have adapted, we have changed our ways, and whilst we haven't always been happy, maybe bored, frustrated, and we have missed our loved ones, we have generally coped with this enforced state of affairs. Many of course will appreciate the money they have saved by not going out, the time saved in not commuting to work, and indeed there will be many who won't want to go back to exactly how things were before the lockdown.

I think therefore that for those thinking of going out we have to just take the new situation as we find it. It is going to be different, maybe difficult even, for bar staff and customers alike. I am though going to work on the basis that, whilst it may not all be as we would like it, there is a better chance that the places we preferred to go to pre-lockdown will be a better bet than those that we didn't like going in, or were indifferent to. And I think if you feel comfortable going even when there are still so many uncertainties, then we have to just go along with it as it gradually evolves. If you don't like what you see, fair enough, it's your decision as to when you eventually return.
As I said earlier on, many places won't even be open on Saturday. Pub owners like, for example, Ossett, Hydes, JW Lees, and Greene King are planning to stagger re-opening their estates. Many individual bars won't be opening till later in the month or beyond. Some places will be opening with reduced hours. But at least there is the imminent prospect of the opportunity to catch up with people, friends we haven't seen in months, those familiar faces we don't really know but seem a part of something we share. It gives us an opportunity to support our local businesses, many of whom having had no income for months, and let's face it, sadly not all of them will have made it back.

Who knows, I may not go to the pub as much as I used to do before the lockdown. But even if it isn't all quite how it used to be, at least a vital part of our social fabric is starting to emerge from the shadows. And I have to say, I am really looking forward to that first pint of hand-pumped real ale. Appropriately socially-distanced, of course....