Waves Breaking In The Lakes....

April 13, 2020
Some worrying news from Hawkshead Brewery, and concerns that despite the great efforts by some breweries and pubs to support their customers and the wider community, there are signs out there in the brewing industry that raise some concerns.... 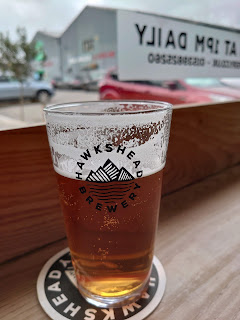 Last Friday, news broke that Hawkshead Brewery, one of the industry's most influential brewers, were making several of their key employees redundant. These included Head Brewer Matt Clarke, Lead Brewer Mark Jackson, plus four of the brewing team, their marketing manager, 2 from the sales team, and 2 draymen. Not furloughed, but redundant. Which is obviously really sad news for the individuals concerned, and also a worry for the thousands of lovers of their beers across the country and beyond. It is only a few weeks since I was sat in their beer hall at Staveley in Cumbria enjoying the beer in the picture above, and I would readily include a couple of their beers, Windermere Pale, and the recently renamed Hawkshead Five Hop, amongst my favourite beers.

And the news certainly goes counter to the signs coming out of Cumbria until recently, with new facilities having been opened at Flookburgh to cope with the increased demand for their beers. It was a Monday afternoon when I visited a few weeks ago, the Beer Hall was hosting a corporate away-day, there were plenty of visitors enjoying the beer and food on offer, and there was even a passing brewer - Nick Briggs from Mallinsons and Briggs Signature Beers - checking out the range as brewers do in the interests of keeping an eye on what's going on.

So what has prompted the current situation? Hawkshead are owned by the Liverpool-based international wines and spirits group, Halewood International. Over the years they have successfully acquired or developed brands - often taken from former established regional companies such as Greenall Whitley and Hall & Bramley - giving them a new life. So brands include Whitley Neill Gins, Crabbies, and Lambrini, and given their focus on these, the acquisition of Hawkshead - along with Sadlers a few years earlier - always seemed a bit of a strange fit. I suspect that the current situation, with income from the beer side contributing significantly less to the group's coffers, has prompted a wave of cost cutting, and possibly heralds a retreat to "focus on core business." And where this leaves Hawkshead when we emerge from the wastelands of Covid-19, who knows? Will it be as part of a scaled down group with Sadlers' Peaky Blinders range of beers - now brewed in Cumbria rather than Stourbridge - offering a more general and safer viable proposition to a wider market? We just don't know, but on a positive note, the talent that Hawkshead have just lost will surely be someone else's gain.
Looking back to 1982, another North West based drinks company acquired a Cumbrian brewery. This was Robinsons of Stockport, who took over fellow brewers Hartleys of Ulverston. This gave Robbies an eagerly-sought foothold in the Lake District, and up until 1991, the beers continued to be brewed at the Ulverston brewery. But then the brewery was closed, some of the beers were, and continue to be, brewed in Stockport, never to be the same again. Back in those days Robinsons were seen as very much the bad boys in the Southern Lakes for some time, but of course things have moved on over the years. All that remains of the old Hartleys now is the former gateway to the brewery in Ulverston town centre and some fond memories of some fine beers.
And recently Robinsons have been in the good books. They are one of several pub-owning companies who have said they will freeze rents for their tenants during the current lockdown. And they join a list which includes the likes of Shepherd Neame, Lees, Adnams, Palmers, Admiral Taverns, Fullers, Everards, and Wadworths. Interestingly, with the exception of Admiral, these are all family-owned or have been until recently, in the case of Fullers, companies who have been around for generations, through several crises - like the odd world war - in the past. On the other hand, those who have not as yet supported their tenants include - and you probably don't need me to tell you some of the names - Punch Taverns, EI/Stonegate (Enterprise as was), Mitchells & Butlers, Marstons, Greene King, etc, ie. the big pub-owning groups, although a few family pub companies such as Batemans and Thwaites have not yet said they will look after their tenants. Star Inns - part of Heineken - say they are talking to their tenants "on an individual basis".

There have been some unlikely developments as well. I nearly fell off my chair when I read in The Yorkshire Post at the weekend that Sam Smiths were delivering beer via dray horse to residents around Tadcaster. This is the same company whose owner refused in the wake of the 2015 floods to allow, following the collapse of the town's main bridge, a temporary footbridge on his land to cross the swollen River Wharfe necessitating a detour of about 3 miles just to cross from one side of town to the other. Now a cynic could say it may just be a means to get some income and give the horses, one of whom is called Humphrey like the brewery's owner, some exercise, but who knows, it may be an act motivated by kindness for the local residents. Let's hope so.
In the meantime, as many of the smaller breweries are continuing to brew and provide a home delivery service, and some pubs are offering a takeaway service for food, Halifax brewers Stod Fold launched their Phoenix Project. In essence, if you order some beer from them during the lockdown, they will credit a proportion of what you spend to the pub of your choice, so that when they re-open again that pub will have some credit in their account with Stod Fold. A simple idea, but one that helps pubs, their customers, and of course the brewery, but it is good to see a company trying to do something to support the industry as a whole.
Sadly though, despite some positive actions by some, it is inevitable that news similar to that announced by Hawkshead a few days ago will not be the last we hear before this crisis is finally over....