Stir Crazy After All These Years.... 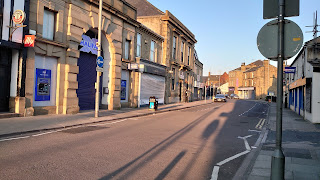 In reality, the chances of meeting anybody on the street these days is an increasingly unlikely prospect. Town centres have become eerie places, nowhere open save for the odd taxi firm, the very occasional takeaway, and nothing much else. Even a zombie apocalypse a la Shaun of the Dead would have had more life about it than when I strolled through the deserted streets of Brighouse the other night as part of my government-sanctioned daily exercise.

Gone were the cars, the people, the buzz. Silence instead of blaring karaoke from The Old Ship. No friendly faces looking out of the windows of the Market Tavern. No sizzles and smiles from Blakeley's Fish Restaurant and Takeaway. No scowls from sullen teens lolling on the empty market stalls.

I walked up the canal towpath. Here the odd walker, jogger, or cyclist was to be found, maintaining a safe distance as they took their daily exercise break. The sounds of nature took over. A persistent Canada Goose honked, ducks quacked, whilst a chorus of tweets and chirrups took advantage of few passing cars to provide a soothing backdrop to these weird times. It was a lovely walk, the absurdity of a bright and warm sunlit evening a stark contrast to the gloomy news that had been circulating again. A guy covered in so much protective clothing that he made Darth Vader look skimpily clad walked past as a statuesque heron maintained a silent vigil across the other side of the canal. 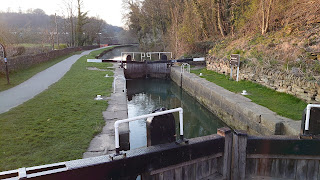 A few walking dogs, a couple of cyclists, and the odd jogger appeared before I headed away from the canal at Brookfoot. It had been a most chilled-out walk. I joined  the main road, quiet save for an occasional passing car or truck. I came to the much-missed Red Rooster, still empty after closing around 12 months ago, but ironically in these locked down times now on a similar footing with every other pub in the land.
I went home for a pint. I'd ordered 10 Litres of Amarillo Blonde online from local brewers Stod Fold, one of several brewers providing such a service to the frustrated pub-goer. I'd put an enquiry out earlier in the week on Facebook group Real Ale Pubs in Yorkshire, asking if anyone could confirm which breweries were doing home delivery. I got an incredible 106 responses, with plenty of suggestions to go at! This followed a few days of confusion when for example, a number of pubs were offering take-outs of beer they had left over in the pub. However, this soon passed as further lockdown conditions were announced and the realities of jobs being furloughed and how the process worked became clear. Anyway, who knew that word a couple of weeks ago, come on be honest?!

And so, I had beer at home. A pint at the end of a day. But, after working from home? It's just not the same as having a chat over a beer in for example, the Stalybridge Buffet Bar after working in the company of your colleagues. Yes, you may well have chatted to them via Teams or Skype, but it's just not the same as the 360-degree vision you have in the office. And whilst the odd beer on your own is OK, it's just not the same when you're not chatting to people or at least have their company as you read or tweet or whatever. A pint is to me much more of a social affair, an accompaniment to an event, the oil that helps to lubricate a conversation.

And I realised 10 litres is a lot of beer. 17.6 pints. I decided to scale back on my order quantities, so I ordered some cans from Barry and the team at The Crafty Fox in Brighouse. They delivered my order within a couple of hours, so quickly in fact that I had gone out for a few bits from Sainsburys and my daily walk, expecting delivery the following day, but I got back an hour or so later, and my order had been left with Jimmy, my next door neighbour. Very efficient, and highly recommended! And next week, I have 5 litres of Bad Ass Blonde due from Donkeystones over in Greenfield.
Stod Fold, The Crafty Fox, Donkeystones. They are all small independent businesses whose normal ways of trading have been thrown into disarray by the lockdown, and so their efforts to support us are deserving of our support during these crazy times. More bars and breweries seem to be coming on stream in terms of providing home deliveries, and so over the forthcoming weeks I will be supporting as many as I can, although it won't be as many as I would like to!

And this week, two of our local independent bars, The Grayston Unity and The Meandering Bear in Halifax opened their new virtual bar, The Grayston Bear. So far, we have had an excellent quiz from Richard Thurlow, poetry from Halifax's punk with a northern soul, Kieron Lee Higgins, and Friday teatime after works drinks. I have enjoyed all my visits, catching up with several familiar faces, although frustratingly the Zoom technology which is the platform they are mainly using doesn't seem to like my ancient laptop! I have therefore had to use my phone which means I can't see everyone who is there. But that aside, it is at least a way to keep in touch with people and what's going on, and big thanks to Michael, Jess, and Andrew for trying to do something to support the community. And tonight (Saturday) there is a DJ set from James Endeacott, on Facebook live from his home in Catford in South London, and tomorrow, all the way from Oklahoma, singer-songwriter Gordon McKinney will be performing from his home. And there's plenty more to come!
So, things are going on. People are trying to help us through the confinement. After 40-odd years of going to the pub, it is difficult though, and I do miss it. I am not a TV watcher, and whilst I can listen to music or read, it is not the same when you can't mix it up with a wander out for a pint. I am enjoying getting out for a walk, but it would be easy to fall into being stir crazy.

Particularly after all these years....

* With apologies to Paul Simon

The Grayston Bear is at: www.graystonbear.com


************
And finally, in mentioning Real Ale Pubs in Yorkshire above, there was the sad news this week that one of the group's members, Kevin Pilgrim, had passed way due to Covid-19, a reminder of why we need to maintain our social distancing however frustrating it is. I never met Kevin personally, but he regularly commented on my blogs and so I felt I knew him slightly. Sad news and my sincere condolences to Kevin's family....