A Week of Gigs and Slocken....

December 04, 2019
I saw two of the best gigs of the year recently, in two different cities, and enjoyed some great beer and pubs along the way. Here's a summary.... 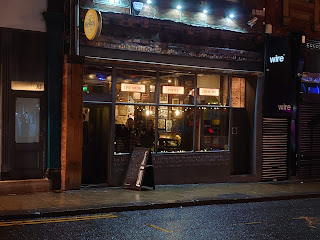 I had been waiting for this week for some time. Two gigs from two different artists who have released some of the best music of 2019. So I had Fontaines DC, the indie wunder-bards from Dublin, in Manchester on Tuesday, and genial Geordie genius, Richard Dawson, in Leeds on Friday.

On Friday teatime, I am getting off the train at Leeds. Despite delays and cancelled trains, I still had enough time for a couple of pints before the gig. I called in at the Brewery Tap, on the station approach, back in the Good Beer Guide. It was quite busy with the Friday teatime crowd but despite that I managed to get served pretty quickly. The half of Leeds Pale from the brewery in question was pleasant enough and the atmosphere was that TGI the weekend vibe that you only get at this time of the week.
I finished my drink, and decided to pop in round the corner at Friends of Ham, another spot I hadn't visited for quite a while. This was also pretty busy, all the tables were taken, so I plonked myself at the bar with my half of a beer whose name I've forgotten. As at the Brewery Tap, there was a great Friday teatime atmosphere. There was plenty of food being ordered and consumed, platters of cold meats and cheeses being ferried past on a regular basis.
Whether it was the waft of passing charcuterie, I don't know, but I was feeling quite peckish when I left Friends of Ham. I know, I'll go to Tapped for a pizza. No you won't, the crowd of jolly ruddy-faced drinkers, peering through steaming-up windows soon putting paid to that idea! I never even thought of Bundobust with its Indian tapas and craft beer. I decided to soldier on, hungry, to Slocken, a new place to me, and newly installed in The Good Beer Guide. It took a few minutes to find, Google Maps making heavy weather of it, but it is really quite easy. Head down Call Lane behind the bus stop opposite the Corn Exchange and you'll be there.

'Slocken' is an old Yorkshire dialect word meaning to drink greedily, and the bar is an attractive conversion it would appear from a former shop. It turns out it is owned by the same people who run the nearby Wapentake, another bar with a good old Yorkshire name. It was warm and welcoming. There were two hand pumps in active service, and I opted for the Roosters Yankee. A guy stood to the side of me looked familiar. I worked out after a few minutes that it was someone I used to work with back in my days with the Gas Board, a place I left in 1982! I introduced myself, he recognised me, and we had a good catch up which rolled over into another pint of Yankee. I love the fact that you can just randomly bump into people you know from years ago and you are able to just carry on as if it was yesterday! It made the evening all the better, so much so that I forgot I was still hungry.

I decided I should get nearer to the venue, so I headed up to North, where I battled through the crowds to get a half of Sputnik, brewed by their own North Brewing. Amazingly, this place has been open since 1997, when it was one of the original craft beer bars, well ahead of its time. It was a bit too busy this time, so I drunk up fairly quickly, and went the short distance to the Belgrave Music Hall, situated just behind The Wrens, where I joined the queue for Richard Dawson.

The gig was on early because it had to finish for 9.30 as there was another event afterwards. But it suited me as I would be able to get the 10 o'clock train back to Halifax. I went upstairs to the venue. It was my first visit to the place. Decent sized hall. I managed to get to the front. It wasn't long before the band appeared, which included John-Michael Hedley from Pigs Pigs Pigs Pigs Pigs Pigs Pigs on bass, whom I had seen only a week or two earlier at The Lantern in Halifax, and a drummer. The music started to be played; mainly tracks from the amazing new album, 2020. Scintillating versions of Civil Servant, Two Halves, The Queen's Head, Jogging, Fufillment Centre, etc; every one brought to life. Stories of the anxieties, stresses, and worries of present-day Britain. Stories of characters that inhabit this troubled land. And whilst I have enjoyed his earlier work like The Vile Stuff and Peasant, these modern day folk songs are so much stronger, more confident, stretching off into places and drawing from references that other songwriters just don't reach. He has an amazing vocal range, from falsetto to the lowest bass imaginable, which informs his songs for ultimate effect, whilst on the guitar references to Pete Townshend and Black Sabbath pop up from time to time. Peppering each interlude between songs with genial banter and stories, he was clearly enjoying his evening, happily shaking hands a couple of times with those of us at the front after a particular tune had gone down well. Richard Dawson is at the top of his game, you owe it to yourself to go and see him live if you get chance. 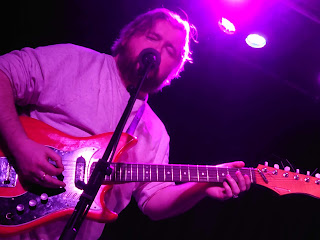 I had enjoyed the gig so much that I bought a copy of the 2020 album on vinyl. We all filed out of the Belgrave Music Hall happily and went our separate ways into the night. As the excitement of the evening's entertainment subsided, I suddenly remembered that I was hungry, and so I managed to get some fries at Burger King, of all places, on my way back to the station...

Meanwhile, a few days earlier in Manchester, Fontaines DC were on at the Ritz, so I had booked a room at the nearby Premier Inn on Portland Street for the night. And I had an excellent night in a pretty compact area of the city. A few minutes walk away from the hotel is the Grey Horse, a tiny traditional Hydes pub with a footprint that could easily fit in many a so-called micro pub. It consists of two tiny areas with a few tables and seating and a tiny curved bar. A few hand pumps serve beers from the Hydes stable, but I opted for a pint of the Original, a traditional bitter, which was on cracking form. I realised there were several Irish people in the place, but rather than being local to Manchester they had come over from the old country to see the band.

I then wandered over towards the Ritz on nearby Whitworth Street but then walked past the queues at Gorilla across the road and called in at Font on New Wakefield Street, newly back in the Beer Guide. The cask choice was disappointing, so I went for a pint of Pomona Island session ale on tap, which was pretty good. It was soon time to head to the Ritz, so I joined the queues and wandered in to the main hall, taking up a spot by the mixing desk. The band emerged shortly afterwards to rapturous applause, and immediately started playing tracks from their brilliant album, Dogrel, which was named as album of the year this week by 6 Music. This is Indie music with Irish heart, belting tunes with lyrics evoking the spirit of Joyce and Flann O'Brien, whilst at the same time reflecting on these troubled days. From belters like Big and Too Real, through the more reflective Roy's Tune and The Lotts, to instant classics like The Boys From The Better Land, it was a delight, the hour-long set was gripping from start to finish. 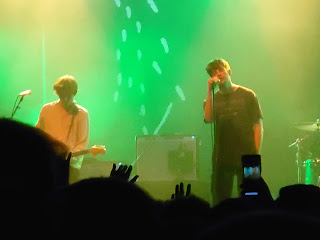 Fontaines DC play no encores, so with an early 10 o'clock finish, it meant I had time for a quick pint. I decided I would venture to one of my favourite pubs in this part of town, The City Arms, where I enjoyed a superb pint of Mermaid's Purse, from Liverpool's Neptune Brewery before retiring to the hotel for the night.

And here's some Richard Dawson:

And here are Fontaines DC: