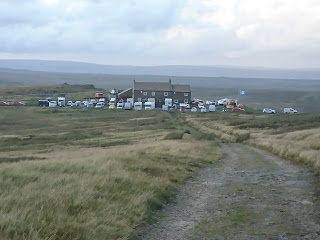 The Tan Hill Inn is the highest pub in the country.

At 1,732ft above sea level it stands in splendid, windswept, isolation beside the Pennine Way, miles from anywhere. The nearest village is Keld in Swaledale, around 5 miles to the south, whilst a similar distance but a world away to the north the busy A66 ferries vehicles between Yorkshire and Cumbria,.

Leaving the A66, the Tan Hill is approached via a narrow road which winds its way through open moorland, switching one way and then the other until you pass a derelict farm building at the bottom of a dip, and then reaching the brow of the hill, a building appears on the horizon. A Yorkshire flag flaps in the incessant wind.

Beside the building is an encampment of camper vans and cars, whilst beyond on the other side, down a slope below the pub is a camp site. And along with those who have arrived on foot, via the Pennine Way, the place is busy, a hub, a destination, a welcoming respite from the wind and whatever else the weather decides to throw in your direction that day. And the weather can be severe; heavy snow on New Year's Eve in 2009 was so bad that nobody could leave the Tan Hill for 3 days. And what if you are a double-glazing firm looking for a suitable location for a TV advert? Well, why not come here, which is just what Everest - other double-glazing firms are available - have done on more than one occasion.

Historically, the Tan Hill dates back to the 17th century. Back then, it was the go to watering hole for the coal miners who lived in a number of cottages which had grown up around the nearby Kings' Pit. Coal had been mined in the area since the early 14th century, but as the easily accessible seams became exhausted, and with, over time, the rise of more accessible mines in other parts of the country, the Kings' Pit became uneconomic and increasingly difficult to mine, finally closing in 1929. With the miners gone, the cottages were demolished, but the pub carried on, helped by the rise of the motor car, and it became a destination for curious day trippers. The growth of walking as a leisure activity led to another visitor stream. And in 1995, the Tan Hill became the first pub in the country to be granted a licence to hold weddings and civil ceremonies.

I visited the Tan Hill for the first time last weekend for a stag do, 20 of us travelling two and a half hours by coach from Brighouse. We were staying overnight, and so apart from helping Dave celebrate his impending marriage to Lindsey, I was able to spend a bit of time in and around the place to get a feel of what makes it such an attraction. 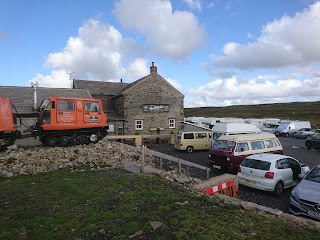 The Tan Hill doesn't look that big from the outside, but once inside it sprawls over a number of rooms. The main bar is straight in front of you as you go in, low-ceiling, wooden beams, very typical of the country pubs of the Dales and Cumbria. There are several hand pumps on the bar, with Dales stalwarts like Black Sheep, Theakstons, and Taylors Landlord featured, but in a nod to county Durham - in which the pub was located for a time following boundary re-organisation - one of the pumps dispenses Castle Eden Ale. They also have their own Tan Hill house beer, courtesy of Pennine Ales, who were originally based not far away from us in Brighouse, at Batley, before re-locating to the Dales village of Well, near Masham, a few years ago. As you can imagine, given the nature of our visit, we gave the bar plenty of custom!

The beer choice featured beers I don't tend to drink much of these days, preferring more modern hoppy and hazy styles, but there was nothing wrong with the beers here. In fact, the Old Peculier I had was outstanding. It was probably 30 years since I had last drunk any, and I had forgotten what an excellent beer it was. This was rich, dark, well-rounded with coffee and chocolate notes.
To the rear of the building, is a large barn-like building with a separate bar and a stage at the far end. Being Saturday night, there was a band on. Tonight we were being entertained by a covers band from North Shields, the Jasper Hart Band, whilst in subsequent weeks there other bands advertised, such as tribute band Exclusively Madness, with posters advertising coach from Darlington and back with a ticket for the band for £12. More famous bands have appeared here, notably the Arctic Monkeys, whilst live favourites British Sea Power have appeared regularly over the years.

There are a number of bedrooms, including 2 bunk rooms which each sleep up to 8 people, and there is also the option to stay in a Hagglund, a Swedish amphibious personnel carrier which was built to operate in almost any weather conditions, different terrain, or the steepest gradient. This is the strange-looking articulated orange vehicle which stands above the car park.

We ate well, and although the menu is not particularly extensive, the portions are decent, and I thoroughly enjoyed my haddock and chips. The following morning, the full English was an excellent way to start the day after the excesses of the previous night.

I managed to get out for a walk after I'd eaten on the Saturday evening, and you realise that vastness of the countryside of the area, with sweeping views that can't haven't changed since the pub first opened. I walked along the Pennine Way with the pub becoming an increasingly small and distant shape before disappearing, until I came to a junction with another path, the moors and sky merging in the evening light. 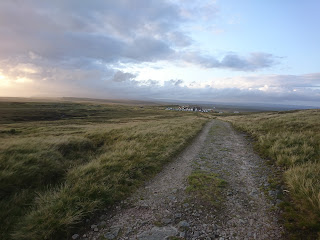 Re-tracing my steps, the pub and its cohorts of cars and camper vans re-appeared. I went back inside, where the howl of the wind was replaced by the welcoming hubbub of the pub. Glasses chinked. Someone laughed. A sleeping dog stretched out a paw. A sizzling platter was ferried to a table.

The Tan Hill was simply doing what it's done for centuries....