From The Gravel Road to The Cobbled Streets....

August 03, 2019
A couple of timeless classics converge deep in the Pennines.... 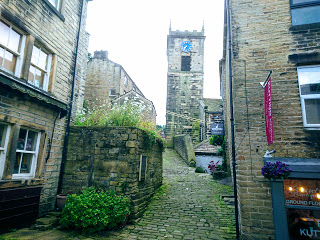 Blending country and rock in a style we now call Americana, it was not only the breakthrough release for the singer-songwriter from Lake Charles, Louisiana, but a hugely-significant album that has had a major influence on so many artists. With a stellar line-up of backing musicians including the likes of Steve Earle, Buddy Miller, Ray Kennedy, and Roy Bittan, it is an absolute classic, a favourite of many, an album that even now rewards with something new on every listen.

Last Thursday I was one of the privileged few hundred souls who descended on the Picturedrome in Holmfirth to catch Lucinda Williams reprising the album at one of the few dates on a short tour of the UK which only comprised additional gigs in Brighton, Bristol, and Birmingham. So it was a massive coup for the former cinema in the picturesque town a few miles south of Huddersfield, where the surrounding narrow lanes and windswept moors are a world away from the cotton fields and open skies of the artist's childhood. It had been months since I had bought my ticket, and seemed to be an event which had tended to slip under the radar of many.

And so, after work, I drove the half hour or so journey over the hills to Holmfirth, got parked up, and went to look for somewhere to eat in a town with plenty of options. I decided to try Lou and Joe's Burger Co, which I had walked past before without going in, with the Picturedrome across the way. As the name suggests, burgers are their speciality, and with a wide range to choose from. I went non-meat, and opted for a Skinny Just Falafs with skin-on fries and green chilli mayonnaise which hit the spot. Quick, friendly service despite being busy, excellent good value food, and whilst I don't do restaurant reviews, if I did, this place would get a good 'un! I will definitely call again.

Just around the corner from Lou and Joe's is a real Holmfirth institution. 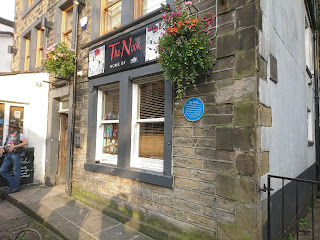 The Nook - Sunday name, The Rose and Crown - is a classic pub down a cobbled alleyway that has been in the Good Beer Guide for years, and was almost certainly listed back when Car Wheels On a Gravel Road was released. As now, it was a rambling multi-roomed pub, chock-full of character, with an open games room to the left, a dark and tiny taproom to the right. The bar was and still is situated to the right beyond the entrance to the taproom. Up a step opposite the bar, the corridor widens out to include seating, fruit machine, and a legendary jukebox, but with room to stand and drink your pint should you so choose. Beyond, with toilets and kitchen on the left, is a further quiet room with additional seating and assorted paraphernalia. 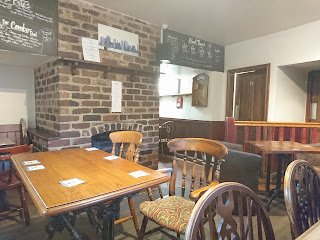 Back when Car Wheels was released, the beer choice at the Nook was limited to the likes of Taylors Landlord and Tetleys, but as today, with the pub now boasting its own on-site brewery, the beer quality was invariably excellent. Nowadays, there are about 10 hand pumps across the main and taproom bars, the majority of beers drawn from the range of their own beers, though occasionally guests are available. This evening, the pint of Nook Blond was bang on form, definitely one of the best pints I have had recently.

Over the past 20 years, in addition to the brewery, which is situated in a separate building beyond the covered beer garden which hugs the stream at the back of the pub, the Nook, which has been run by the same family for the past two generations, has added accommodation and even another bar, the Tap House, at the entrance to the alleyway opposite Lou and Joe's. This is a more modern and stylish affair, with beer on hand pump and tap as well as its own restaurant; at the Nook in the 90's, if you were feeling peckish you would have had to make do with a pork pie at best, whereas nowadays home-cooked meals are served in the pub every day.

On a warm summer's evening, with welcome sunshine, I took my pint outside to the front of the pub, where the picnic tables were all occupied, so I leant on the bridge beside the pub, with the stream splashing and crashing noisily below after all the recent rain. Just as 20 years ago, the Nook is a timeless classic. OK, it has evolved over the years, but in many ways it still has the same feel as it did back then, and I wouldn't mind betting that it still will in another 20 years.... 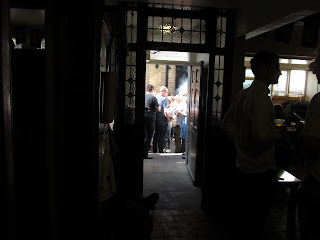 It was approaching time for the gig, so I headed over to The Picturedrome. I joined the long queue on the cobbles round the back as we snaked in with our tickets to get them checked. Wristband duly attached, I grabbed a half of Taylors Boltmaker from the Box Office bar, and walked down to the main hall. It was heaving, but I managed to get pretty close to the front, although as usual the-tall-guy-at-the-gig did his best to limit my view.

The band came on, began to play, as a slightly grainy old home-movie of a typical family scene played on the screen behind. Lucinda came out to a massive cheer, she picked up her guitar, and they started to play Right On Time, side 1, track 1 off the album, which started the show off on a sound footing. The song finished to great applause, which clearly impressed the star of the show. Straight in to track 2, the title track, which sounded even better live, the band giving the song a new life. After the track had finished, Lucinda told the story behind the song, with its recollections of growing up in Louisiana, and how they had struggled to find a gravel road they could use for the picture on the album cover. 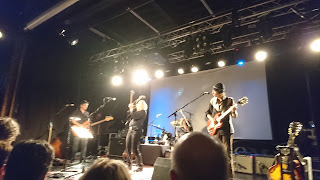 And it was as much the stories between the songs that made the evening so special. Brimming with Southern warmth, Lucinda drew you into the songs with their characters and tales from her past, whilst the screen behind showed images of some of these characters, including country singer Blaze Foley, a real character who liked to party and who was shot dead at the age of 40, the inspiration for track 4, Drunken Angel. Old boyfriends were mentioned, such as the one who loved cooking and drinking and always felt at home at Lake Charles (Lucinda's home town), and the former band member who promised her everything once they got off the tour bus, (Metal Firecracker, track 9), which never happened of course. And after one song finished, to yet more rapturous applause, she explained that she would always feel gratitude towards the British. When she had moved to Los Angeles in the 80's, despite rave reviews, she couldn't get a record deal in those genre-defined days as her music slipped into the cracks between country and rock. This was until she was approached by a British label, Rough Trade, whose stock-in-trade was post-punk, indie rock, who had just set up an office in LA and were looking to broaden their roster of artists into other genres. The rest, as they say, is history.

Lucinda and the band worked through the whole album, in sequence. Joy was a joyous funky workout, Concrete and Barbed Wire given extra resonance with the current activities on the US-Mexican border, with the reflective Jackson, the final track on the album bringing the main part of the gig to a conclusion. The band left the stage to thunderous applause and cheering, returning a few minutes later to play a few songs from other albums.

It had been an excellent evening, and when I got home I dug out my copy of Car Wheels on a Gravel Road, which has been playing in the car ever since.... 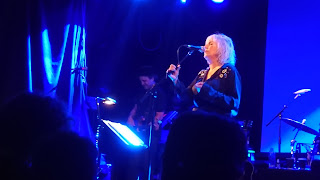