April 20, 2019
The traditional Good Friday Grand Tour with a group of friends from Brighouse has just taken place, with the pubs and bars of Manchester's Northern Quarter bearing the brunt.... 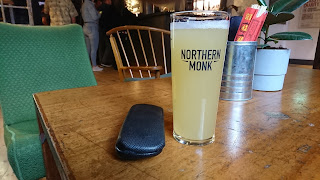 A typical Good Friday began with a group of us meeting as usual for breakfast at the Station Cafe in Brighouse. Duly fed and watered - although in my case, not as fed as I would have liked, a lapse in concentration when ordering meant I ordered a smaller breakfast than intended - around a dozen of us wandered around to the station for the 10.55 to Manchester Victoria. It was a beautiful, warm and sunny spring morning, the platform was busy, with a number of people possibly staying on the train after Manchester to visit the recently-added location of Southport.

An hour later, we were pulling into Manchester Victoria. A splinter group decided they would head over to the Piccadilly Mile to visit the Cloudwater Brewery Tap (it was shut) and the Track Brewery (so was this). Those remaining walked the few yards up to the Pilcrow, which was basking in the sunshine in Sadler's Yard. It was just opening up and so our group was the first to order. I went for 2/3 of Grisette, a collaboration between Cloudwater and Burning Sky. We headed outside to sit in the sun, with an ambient soundtrack bringing a Continental vibe to the streets of Manchester - not that it was to everybody's taste.

We finished our drinks, and it was off up the hill to the Angel, now with even more buildings surrounding it. The number of cranes in Manchester and Salford seems to show no sign of slackening, it just seems hard to believe there is that much demand. The Angel was quiet, the beer choice uninspiring. Most of us opted for the Swallow Gold from Bowness Bay, which I thought was a bit tired and end of barrel. We sat out in the sun as the traffic roared past and Ian and I put the world to rights.
Next port of call was inevitably the Marble Arch, five minutes walk up Rochdale Road. It was busy inside, but even busier in the garden outside. I ordered a pint of Pint, which was excellent (but not as good as it had been in the Grayston Unity a few days earlier). Such is the demand for Marble beers these days that they are re-locating the brewery from down the road under the railway arches on Williamson Street to a new site in Salford.
We chatted and hung around in the sunshine for a while, but despite the temptation of another pint of what had been the best beer of the day so far, we decided to go to another old favourite, the Smithfield Market Tavern on Swan Street, where I had a pint of Oat Pale from one of my favourite brewers, Almasty, not often seen in Manchester. In my humble opinion, this refreshing, unfined, 4.2% ABV hazy beauty was the best beer of the day.
We sat in the secret yard out the back, which backs on to another yard, belonging to the Burton Arms next door, which is due to be re-launched as a music venue and bar called The Rose and Monkey. The splinter group had started to message us to find out where we were. Next up, we went next door to the amazing Mackie Mayor, where with Jarl going off as we ordered it, I opted for a beer from Cromarty Brewing, Kowabunga, which was very nice. We went up on to the balcony in search of seats, for some crazy reason though a large part of it was closed despite the place being busy.

And then it was over to the Bar Fringe, across the road, very much like a local's pub although it does attract a mixed clientele. It too has a sun trap of a yard, so we went out with our drinks, most of us opting for a pint of Dr Facc, from Salopian, which was typical of their beers and one of the best beers of the day. The wanderers were closing in, so we arranged to meet up at The Crown and Kettle, where once again we took our beers outside, although this one was very enclosed so that the sun could hardly get a look in.
Food was beckoning, so a group of us went off to find a curry, arranging to re-convene at Beatnikz Republic on Dale Street. We dined at Al-Faisal on Thomas Street, the food, the quick service, and the price going down well. The Northern Quarter had a relaxed, Continental feel as we wandered the streets to our penultimate destination. I like the Beatnikz Republic tap, which opened as a replacement for their brewery tap, situated in the far reaches of the Green Quarter. We ordered pints of hand-pumped Beach Bum, a delicious 5% West Coast Pale made with Summit, Crystal, and Cascade hops, with refreshing citrus flavours bursting through. Ironically, for a beer that is ideal for drinking in the sun, we were sat in a bar that doesn't have an outside area! From there, it was a short stroll down Tarriff Street to our final destination before we got the train back to Brighouse. This was the Northern Monk Manchester bar. I spotted that they had Striding Edge on the bar, which I raved on about when I first sampled it at Vocation & Co in Hebden Bridge last year. This is a stunning, full -flavoured hoppy beer whose body and flavour belies its low 2.8% ABV. But how they can justify charging £4.90 a pint when paying less than 24p a litre in alcoholic duty (a 4% beer would is around 76p a litre) is beyond me. Other than that, great beer and a good bar to round off another excellent trip.
We'd had a great day, some great beer, some excellent company, and plenty of laughs. The wonderful sunshine did help, of course. Stockport and Sheffield are among the locations already being talked about for next year's trip. We arrived back in Brighouse as the skies were darkening, with a harvest moon in the sky, and with just time for a quick pint of Squawk Crex Pale at the Market Tavern - quite appropriate, although we hadn't seen any of this local brewery whilst in Manchester - before heading off home....