March 09, 2019
I went to Saltaire last Friday to visit the Bradford Beer Festival and Ossett Brewery's gleaming new flagship venture, Salt....
I had missed the Bradford Beer Festival last year, but decided that I would go again this time as it is always worth a visit and you always bump into lots of people you know. I sort of knew that after the heights achieved by Manchester it was a big ask to hope it would be as good, but Bradford is a different kettle of fish anyway, more, well, traditional. And on a Friday lunchtime, with free entry for CAMRA members, it had drawn a large contingent of the old guard to the beautiful Victoria Hall.
It wasn't exclusively oldies though. A large number of younger ones had taken the day off work  to be here(I suppose I fell into both camps....), and the main hall was pretty busy when I caught up with some of the lads I had arranged to see there. And then a bloke I know from Leeds whom I only see at beer festivals these days came over to say hello. A couple I know from Halifax shouted across to me. And I went over to introduce myself to a guy whom I recognised from social media who reads these blogs. It is a great place for meet ups....

So what about the beer? Like a lot of beer festivals there was a theme to it. This was Beers from Yorkshire and the Midlands. Which is fine, but a lot of the beers or at least the breweries would have been sampled by many of the clientele before. Now alongside the likes of more traditional breweries like Taylors, Ilkley, and Bradfield it was great to see the likes of Anthology, Beer Ink, Nomadic, and the excellent Wilde Child, but I was a bit disappointing there was no North Riding nor Northern Monk. And by largely limiting yourself to certain regions it does restrict the overall offer in terms of style and breadth of range. But this is not meant as a criticism, just an observation. 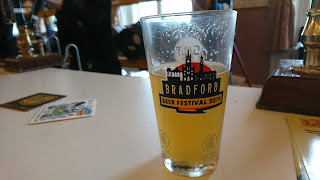 In terms of the beers themselves, the best one I had was a US Session ale from Anthology, but I also enjoyed Crisis , what Crisis?, a pale ale featuring Simcoe, Nelso Sauvin, and Mosaic from Wakefield's somewhat elusive Five Towns, and the New Zealand Pale, Taupo, from Sheffield's Neepsend, featuring Kohatu and Taiheke Hops. And not far behind was Sgt Hugo Stiglits, a German style pale from Wilde Child. But I missed out on the best-named beer in the programme, a white stout from Beer Ink called The Rug Really Tied The Room Together as - yah, boo - stocks were being held back for the evening session. I did though get to try the latest innovation from Taylors, Hopical Storm, a modern 4% dry-hopped pale made with US hops, which I found was very timid and pretty thin. Taylors are great at what they do best, brewing excellent traditional beers, but as with the woefully insipid Knowle Street Bland, I can't see this doing anything to widen their appeal in younger and hipster circles. 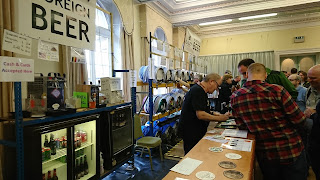 As a nod though to the hipsters, the Festival featured a Craft Ale bar, but the so-called Hockney Bar was really only a token effort, with only a few taps available. But there again, for the majority of the punters attending the festival, certainly when I was there,  it wouldn't be of interest.

All that said, Bradford Beer Festival is very good at what it does, it knows its audience, knows what they like, and by and large delivers it. It is a friendly place, in a beautiful location, and attracts people from far and wide. It's not Manchester, but I have no doubt I'll be back again....
The festival always shuts at 4.30 for a break until 6, so JP and I wandered up the road to Salt. This is the pub formerly known as the Hop and before that, the Tramshed, but in its latest iteration, owners Ossett have built a shiny modern brewery round the back of the pub set in industrial-chic surroundings, added in a bar, tables, food, and the de rigeur throbbing soundtrack a la Magic Rock and other brewery taps. Friendly staff served us from the bar, which has 4 hand pumps on it, whilst there were a number of taps serving craft ale on the back. Shelves in the fridge were stocked with cans of Salt beer. 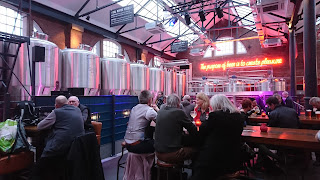 We tried a pint of Jute on handpump, a refreshing 4.2% session pale ale which was one of the best beers I had all day. It is a modern-style ale, certainly not what you would normally expect to come out of the Ossett family. We followed with a pint of White Rat on tap, intrigued to know what one of their best-selling beers would be like being served in a different manner. It was nice enough, but I think White Rat's style is definitely more suited to cask. 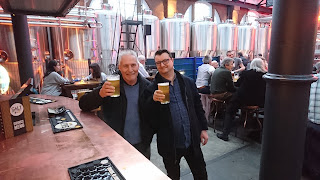 I liked Salt. Whilst I think Taylor's attempt at widening their appeal with the likes of Hopical Storm smacks of tokenism, Ossett's does not. They have spent a fortune on Salt, which on a Friday teatime was packed out with happy punters. It may be early days, but I think it will be a success. The Salt beer I tried(Jute) was good, the branding is crisp and clean, and with the clear level of investment in the brewery, they will make sure it works.

I bade JP farewell, and made my way back to the station for the train to Bradford. I needed some food, but on my way to the Sheesh Mahal I stopped off at the Peacock, a bar on North Parade I had not visited before, but about which I had only heard good reports and which had broken into the 2019 Good Beer Guide. It is a friendly, Indian-themed bar with 5 hand pumps, and the half of Phoenix Arizona was spot on. From there it was a few minutes walk to the curry house, where I had a really enjoyable lamb madras and pilau rice, before a walk across the city to the Interchange for the train back home.

It had been another most enjoyable day....