All Aboard for Manchester Central....

February 02, 2019
It was the Manchester Beer Festival last week, and it remains one of the best beer festivals around. Here's my thoughts.... 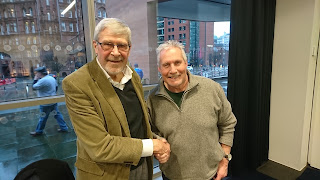 Years ago, when I lived in Manchester, I used to park my car in the former Manchester Central railway station. Draughty and leaky, back then it was a crumbling relic from a bygone age, when the train was king and the car was the privilege of the few. Over the ensuing 40 years, times have changed dramatically so that buildings shoot up at an alarming rate in the city, but more positively, many old, often iconic, buildings have been given a new lease of life. Buildings like Mackie Mayor and the former Mayfield Railway Station have been re-invigorated recently, but long before that, the old Manchester Central morphed into G-Mex and became the home to many trade fairs, exhibitions, and other events.

A year or two ago, it reverted to Manchester Central, and for the last few years, every January, it has hosted the Manchester Beer and Cider Festival. And so I was back there last week to take in the 2019 edition, as it happens the 50th anniversary of the last train rolling into the former station.

It had been well-advertised. There was a bar, in association with the Society for the Preservation of Beers from the Wood, featuring beers from the wooden cask. There was a doubling in size of the bar showcasing Irish beers. There were dedicated brewers' bars from the likes of Tiny Rebel, Blackjack, Mallinsons, and, for the first time, Thornbridge. There was plenty of keg beers, cider, and perry. And a huge number of hand pumps and barrels selling a massive range of cask beer from all over the land, plus more beers from Europe and a few more from around the world.

The organisers were hoping for a bigger crowd than last year's 15,558, but when I got there on the Friday afternoon, it seemed quieter than I remembered from last time, although Rob from Blackjack told me more tickets had been sold this time around. I had actually popped in for an hour or so on the Wednesday evening for CAMRA members before going to see Young Fathers round the corner at the Albert Hall. It gave me the chance to try one of the best beers I had this time, a Mosaic from Arbor, and one of the most unusual, a Pomodori Gose from Runaway, featuring tomatoes. The Champion Beer was announced that night too, with the award going to - surprise, surprise - Pomona Island, for their Love Buzz, a 3.3 Table Beer. 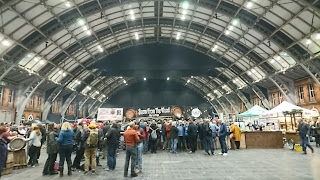 So back to Friday. I had arranged to meet my mate Alex at the Festival, and he duly arrived as I was enjoying a pleasant half of Limeburner, from Kinnegar of Letterkenny, at the Irish bar. Despite being predominantly a cider drinker, Alex was joining me at a tutored tasting conducted by that doyen of beer writers, Roger Protz, former editor of the Good Beer Guide, and author of numerous books. We were also due to meet with Martin, whom I had accompanied on part of his recent trip to Halifax and another of the GBG ultras, Duncan Mackay.

After some initial uncertainty as to where the tastings were taking place, we were shown to a room off to the right as you go into the festival. There were a few tables, mostly occupied. I spotted Martin, and we joined him on his table, where we were introduced to Duncan. Our tutor was sat behind a table at the front of the room, where a huge glass window made for a backdrop featuring the red brick magnificence of the Midland Hotel.

The theme of the tasting was 'Beers from the Wood', which featured 5 beers including Bretted El Dorado from Abbeydale, Bad Kitty from Brass Castle, a stock beer from Beer Nouveau, Sourdough from Wild Beer Co, and finishing off with the much-loved Elland 1872 Porter. All had been aged in wooden casks, and all had picked up some characteristics from their vessel, such as the rye whisky imparted to the Bad Kitty. The Abbeydale was interesting; pale, slightly sour, and featuring brettenamyces, a wild yeast strain which is a common characteristic of Belgian lambic beers. Throughout the tasting, as we sniffed, swirled, and sipped each beer, Roger talked about each one knowledgeably and gave us some fascinating insights into the beer styles and their context in the social history of the country. At the end of the tasting, he chaired a discussion on the shock news that had broken that morning, the sale by Fullers of their beers to Asahi of Japan, on which he expands here. It was a most interesting hour, and it was a pleasure to meet Roger.
We went back into the bustle of the main hall, where it seemed to have got busier over the previous hour. Martin bade us farewell as he had a pub to visit, but Duncan stuck around for a while with his mate, Brian. Duncan, who is from Paisley, is the only person to have been in every pub in a current edition of the Good Beer Guide, and not only does he visit pubs, but he is also a groundhopper, having visited almost 2,300 different football grounds! The following day he was thinking of visiting FC United, although I did suggest he could visit The Shay (but no thanks, he's already been there a few times!). And for those quiet times when he is not visiting pubs or hopping from one ground to another, he is also interested in moths. After a while, Duncan and Brian decided to head off to try one of the city's pubs. Having had contact via Twitter for a couple of years, it was a pleasure to finally meet Duncan.

Alex and I wandered over to the Craft Keg bar, and then over to the cider bar. My friends Rob and Jay from Brighouse landed, having got checked in at their hotel, and we wandered around sampling a few more beers from here and there.

Unlike last year, when Pomona Island made their debut, and beers from the likes of Bristol Beer Factory, Torrside, and Marble stood out, I didn't come across anything that completely blew my mind. There were some very good and enjoyable beers such as Juicy by Tiny Rebel, the Arbor as previously mentioned, and the ever-reliable Jarl from Fyne Ales. It was also interesting to try some of the Irish beers, such as Small Axe from Bullhouse of Newtownards, although I never got to try anything from the wonderfully-named Trouble Brewing from the village of Kill in County Kildare. On the keg bar I enjoyed my first ever half of Donzoko Northern Helles, all the way from Hartlepool. 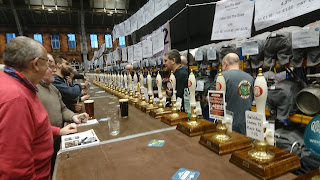 But it's not just about the beer. The atmosphere was wonderful, the festival was very well-organised, and in addition to those already mentioned, it was a pleasure to meet up with old friends and chat to people for the first time. I met some lads from the north German city of Bremen who were over for a few days, and I had a good chat with Sean from Kinnegar Brewery about the difficulties of being a small independent brewery in a land dominated by Guinness. Alex got a train back to Stalybridge, I left Rob and Jay at the festival, and then after a final walk around, I got a tram back to Piccadilly and the train back to Huddersfield. 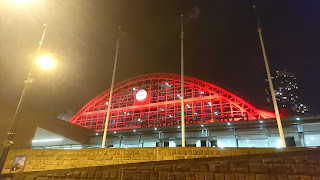