Ten Pints Of Bitter and The Football Match....

Football has been back now for a number of weeks and those pubs that have a special affinity with the local team are starting to see a return of football fans coming in to enjoy a pint before and after the game. Just as they have been doing for years.... 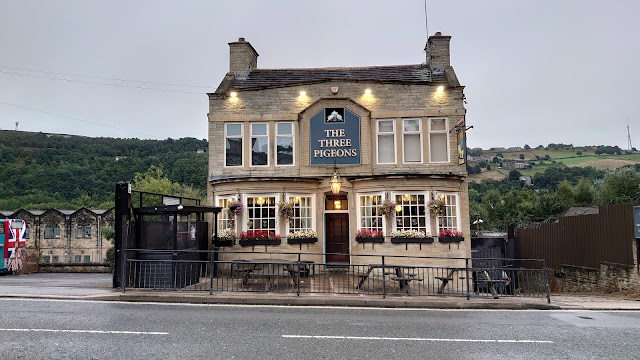 A few pints and a game of football is a relationship that is as old as the game itself. At the grassroots level, many teams have sprung out of pubs, as they did in the workplace, from within local organisations, social clubs,  church groups, in fact anywhere where people met in any number, many going back to the smoky, sepia days of Victorian England. But the fact that a pub was able to provide refreshment, some sandwiches, or other food, maybe a room for club meetings, and was in any case where people met socially and informally gave it certain advantages. And a few pints back in the warmth of the pub after a hard game on a muddy council-run pitch in the cold and wet maybe with some new bruises is the perfect way to restore the soul. The match replayed in conversation, each from a different perspective, goals celebrated, decisions questioned, with banter flying of course. The pints giving the game a hazy, rosy glow, performances enhanced in retrospect. It'll all happen again next week, with the pub there to discuss the build-up during the week. And of course, for the teams that eventually get their own ground, a clubhouse is the holy grail, an income stream with a bar an essential component.

This link between beer and football exists at every level of the game. For the long-established league clubs that were almost invariably in our larger towns and cities, often situated amidst rows of terraced housing, there were plenty of pubs where fans could meet before the game and have a drink after the game to celebrate or drown their sorrows. In one extreme example, there was a pub situated at each corner of Premier League newcomers Brentford's former ground at Griffin Park, but every team's followers has its own favourite pubs.  At Leeds there was the Peacock - now run by Ossett Brewery - on Elland Road opposite the ground and Peter Lorimers's pub the Commercial in nearby Holbeck, in Newcastle there was the Strawberry, now dwarfed by the towering stands of St James Park, but it is the same for every club. And for former East Manchester Football Conference side Droylsden, the club's ground was even called The Butchers Arms after the pub next door!

For my club, Halifax Town, a consistent de facto home over the years has been the Three Pigeons which became the nearest pub to the ground when former Tetley's house the Shay Hotel was demolished. It has been where at least part of matchday has been spent, although there have been times when our group have favoured other nearby pubs such as the long-lost Pump Room, the Royal Oak/Dirty Dick's, and even the more food-orientated Shears Inn, tucked away in the valley at Paris Gates. In more recent times the Grayston Unity has tended to be the pre-match venue.

In referring to Pete above, he was just one of the many players who, in the days before the best players were millionaire superstars with agents and lucrative sponsorship deals, went in to the pub trade when they hung up the boots, hoping their reputation on the pitch would enable them to build a successful life post-football, often back to a world they had grown up in. It worked for the breweries as well; having a well-known name run one of your pubs would potentially be a draw for customers.

At one time beer was heavily-advertised around football grounds. I remember years ago when visiting Manchester City's old ground at Maine Road and being greeted by a huge sign on one stand which said Smile, you're in Greenall Whitley Land, which was no doubt disputed by the likes of Boddingtons, Holts, and Hydes, but 50,000 plus people would see it every home game plus more on TV so Greenalls would likely see that as money well spent. And the days when a team like Liverpool would be sponsored by a brand such as Carlsberg may be gone, but there are still plenty of commercial tie-ups between the world of football and beer at all levels. The FA has a partnership with Budweiser, and a random check across a few of the Premier League clubs revealed that partnerships with breweries are quite common, although most of them are globally or regionally known lagers like Carling and Chang because of the huge global TV audiences. I was though pleased to see that whilst newly-promoted Norwich City have a tie-up with Greene King, they have a further partnership with traditional Norfolk brewers Woodfordes! The world of craft beer has got involved: the pouring rights at Tottenham Hotspur's spanking new ground went to Beavertown, North London rivals Arsenal have partnered with Camden Town, whilst closer to home former Premier League Huddersfield have a long-standing arrangement with Magic Rock which also includes an official cask beer, Hat Trick, commemorating the three consecutive championships they won way back in the old First Division almost a century ago.

The choice of beer to drink at the football ground though is generally pretty limited, with real ale in particular a rare commodity. But there are exceptions, notably at Leyton Orient Supporters' Club bar which is a Good Beer Guide regular, the current local CAMRA club of the year, and a former national finalist. It sells a range of up to 10 changing beers, although it is normally only open on matchdays before and after the game. Further down the football pyramid, the Blues Bar, the supporters' club bar at Gainsborough Trinity, and the bar at Bamber Bridge have both been in the Beer Guide. Outside the season, Stockport County have hosted the Stockport Beer Festival on several occasions in recent years. Real ale does pop up at more grounds in the lower leagues, and when I visited Brighouse Town for their Northern Premier League game against Bridlington Town the other night, the hand pump selling Aussie Kiss from the nearby Halifax Steam Brewery was in regular use.

For a trip watching your team play away, a few pints in a different town is an essential component for many fans. From following Halifax Town away, we have visited some wonderful towns and cities in recent years, with Cambridge, Stockport, Chesterfield, Lincoln, and Chorley particularly good. And then places like St Albans where we have stayed having seen Town play at nearby pub desert Boreham Wood have been wonderful, likewise Newcastle is just over the river from the less endowed Gateshead. Over the years we have visited some wonderful towns and enjoyed some excellent beer on the road.

Back home, and the Three Pigeons has been a constant backdrop to the highs and lows of the local club. It was there when they had their record attendance way back in the 1950's v Tottenham, it was there when they gained promotion to Division 3 in 1969, when the mighty Manchester United featuring Best, Law, and Charlton were defeated in the Watney Cup in 1971, when the team lost its league place in 1993, regained it 1998, went into administration in 2008 and started life in the lower reaches of the pyramid, gained several promotions through the leagues, won at Wembley in 2016 in the FA Trophy, and so on. It has been the steady companion to the club's fortunes, the beer flowing to lubricate the celebration, the misery, the mundane. The games analysed, future trips planned, and then back again the next time.

A pattern repeated in football towns up and down the country....

The title of this piece was inspired by a line in the song 'Northern Trash', by my good friend, musician, and artist Roger Davies.