September 01, 2021
I visited the historical Nottinghamshire market town of Newark-on-Trent last weekend, a lovely place with some excellent pubs. Here's what I found.... 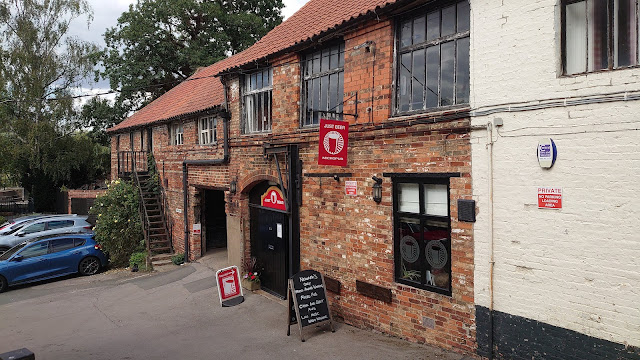 Newark is one of those places like Cambridge, Lincoln, and much of that London that I have visited several times in the past but have never blogged about. So last Saturday I decided to remedy that. It was a three train journey: Brighouse to Leeds, then one to Doncaster, and then change for Newark, but it was all pretty seamless, and around twenty past 12 I was limping into town from Northgate Station. I made my way along Appletongate, which according to The Good Beer Guide was the home to a Castle Rock pub called the Fox & Crown. I was building up a thirst for a Harvest Pale, but alas when I got there the place was closed and with blank chalkboards on the wall by the door and window blinds firmly pulled down, it didn't look to be opening anytime soon (a fact that was confirmed to me later in the day). I turned right towards the market square and bumped into a couple I knew from back home who were visiting a rock festival just outside town.
The market was full of stalls with striped red and white canopies selling everything you could think of and probably more besides. The place was bustling, the traders were in good voice, and with bunting flapping and the sun beating down under the watchful eye of the Grade 1-listed St Mary Magdalene Church, it made for a wonderful sight. There is much more to Newark; the castle, plenty of shops, places to eat, a Civil War museum, and the attractive river front as well as a lot of historical buildings and references to check out, plus plenty more pubs than the ones I got chance to visit. 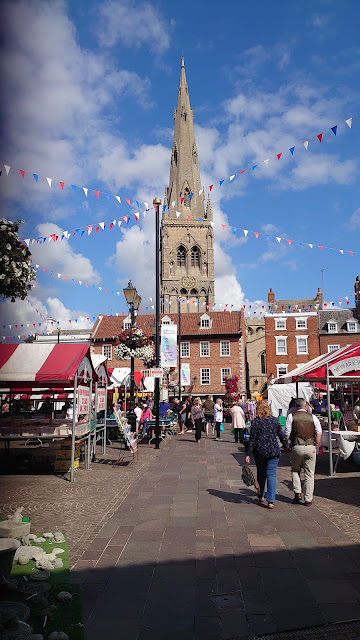 I wandered up Slodman Street and came to a pub I had visited a few times before, the Prince Rupert. It is a historic pub, dating back to the 15th century, presumably named after the Royalist cavalry commander from the Civil War in which Newark was staunchly behind the Royalist cause. It is a low, half-timbered building in mellow colours with several rooms. In a throwback to the early days of the post-pandemic re-opening you were asked to wait to be seated but it turned out this was more to assist with bookings, and it was swiftly relaxed when I asked about the guest beers to an invitation to come to the bar and look for myself. That trip resulted in me purchasing a 4.6% West Coast IPA called Big Bang Theory from Oundle-based Nene Valley, which was a little sweet for my taste but pleasant nonetheless (NBSS 3). I sat in a sparsely-decorated room to the right of the entrance as you go in, but after being the only occupant it soon filled up with a couple of family parties who were dealt with quickly and efficiently by the staff. Well worth a visit if you are in town.
I finished my pint and left the families to enjoy their Saturday lunch-time get togethers, and headed around the corner to Castle Gate. There I came across another pub on my list, the Flying Circus, its name and much of the internal decor a homage to Monty Python. And as I sat and enjoyed an excellent pint of Magpie Pow Wow - a 4.6% IPA hopped with Citra and Sorachi - it took on more resonance as a large number of steampunks descended on the place, their HG Wells/Jules Verne-inspired attire fitting seamlessly into the place. It turned out there was a gathering in the town, and a former work colleagues and DJ-partner was in town although our paths didn't knowingly cross, but he kindly agreed to let me use one of his photos which he had posted on Facebook. They certainly added some colour and atmosphere to the town, and as I noticed on my last encounter with them in Hebden Bridge they like to enjoy a drink or two! 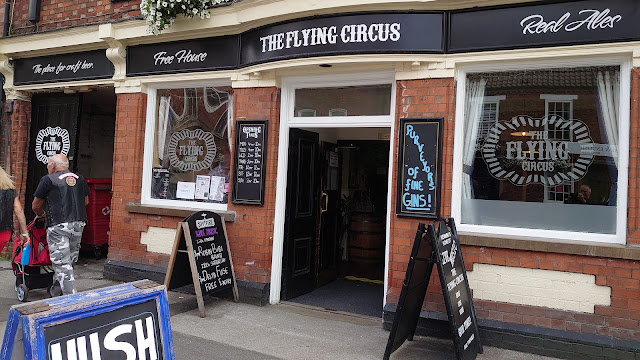 I liked the Flying Circus - the beer was good (NBSS 3.5), the staff were friendly, there was a good rock-themed soundtrack, and the atmosphere was excellent!
Just across the road, down the side of a sloping yard was my next destination. This was the Just Beer micropub (opening photo) which I had visited 2 or 3 times in the past and always enjoyed. This was one of the original micros in the country, and it still gives pride of place to conversation and good beer. It features a long thin room with bench seating and tables, whilst before you get to the brick-built bar a pair of church pew-type seats face each other allowing for cross-room debate. The walls feature numerous CAMRA-awards and brewery trays whilst chalked above the bar it stated that since opening in August 2010, 5,960 beers have been served from 1,353 breweries. A further room is situated off the main bar, whilst a couple of beer engines are on display. Just Beer oozes tradition, but it was interesting to see that  the line up of 7 hand pumps (including a cider) has been augmented with half a dozen keg lines since my previous visit. 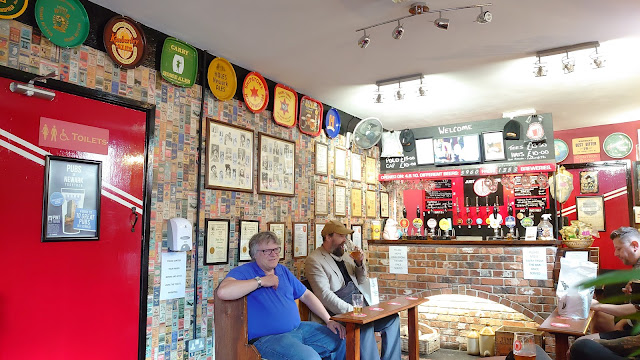 I ordered a pint of Scorchio, from Pomona Island. A 3.9% Summer Ale, it was a lovely pale golden colour and unlike so many of their predominantly hazy beers, as clear as a bell. It was absolutely spot on, and a possible contender for my best pint of the year (NBSS 4.5). Whether it was the weather outside, I don't know but it absolutely hit the spot and resulted in more than one return trip to the bar! The place was quite busy, with a steady flow of customers, including the occasional steampunk. It was fantastic to spend some time again in this traditional gem of a place, join in a conversation, catch the odd comment from a distant table, and just savour the atmosphere, whilst our host with a trilby hat atop his long hair single-handedly dispensed the drinks with an avuncular charm. A must-visit if you are in town.
I had one more new place to visit, and this was situated a few minutes walk away on Portland Street. This was the Newark outlet for Nottinghamshire brewers Blue Monkey, named The Organ Grinder, like its 3 sister pubs scattered around the county. It was a solid-looking brick building featuring their trademark grinning blue monkey logo, and it was a pleasant and quite busy locals' pub with a range of the brewery's beers on hand pumps. I went for their 4% pale golden bitter, which was another good beer which I rated NBSS 3.5. Definitely another pub to visit if you are in Newark. 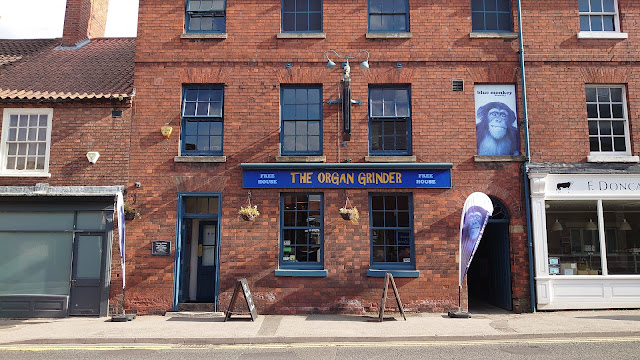 I decided I would visit the Castle Barge, which as the name suggests is an old barge moored in the River Trent in the heart of town that has been converted into a floating pub. I did though get waylaid on my way by a record shop and 20 minutes or so of browsing, plus the fact I was getting hungry was making the original train I had earmarked to go back on look less realistic. I arrived at the Castle Barge, went on board, and whilst I hadn't noticed any waves on the river, I did have a little sway....
I ordered a half of bitter from another Nottinghamshire brewer, Pheasantry, from the bar situated below deck, and decided I would go back on to dry land and sit at one of the tables that were set up. The beer was another pleasant beer which didn't quite hit some of the beer from earlier in the afternoon, but it was a worthy NBSS 3. And beer duly finished, I set off back to Northgate Station, stopping only to buy what turned out to be a huge portion of chips from the Appleton Gate Fish Bar which kept me quiet for a while during my now longer wait for the train home....
Follow me on twitter: @realalemusic