More Words About Walking and Beer....

June 07, 2020
In which I take a few tentative steps into the world beyond the reaches of the Calder Valley.... 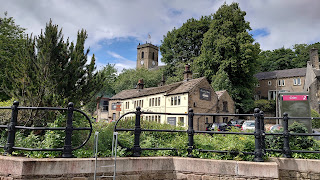 I decided I needed to have a change of scene.

Over the past couple of months I have only been to a small number of places, all within a few miles from home, apart from a necessary trip into Bradford to get my car serviced. Although the rules on travelling to exercise were relaxed a week or two ago I hadn't felt the urge to venture too far. Yesterday though, amidst a succession of squally showers, I decided I would go somewhere different for my walk. I really fancied a walk on the tops, but in light of the weather I opted to go for a low-level walk from Slaithwaite (aka Slawit) along the canal towpath to Marsden and back. Another walk in a distant valley. Well not really, Slawit is only 8 miles from home.

I went the pretty way, dropping down into the village from the Scammonden side, with the hills stretching away in the distance, the fields and moors an invigorating and enticing panorama. Slaithwaite is the only village in the country where the canal runs alongside the main street, the canal in question being the Huddersfield Narrow Canal, which flows for just short of 20 miles from Huddersfield to Ashton-under-Lyne, crossing the Pennines by the Standedge Tunnel near Marsden and a staggering total of 74 locks!
Once parked up, I picked up the towpath and began my walk. Across the canal I spotted the Shoulder Of Mutton, closed at the moment of course, with the tower of St James Church beyond. Talking of pubs, in normal times, the Commercial, by the mini roundabout in the middle of the town, is well worth a visit. Last time I went in was mid-walk on a warm and sunny day a couple of years ago, a group of us enjoying an excellent pint in the sun-trap beer garden out the back. And then there is the Silent Woman, not far from the Shoulder, which I've never actually been in. The pub supposedly takes its name from an incident following an argument between an 18th century landlord and his wife in which he cut off her head. The decapitated body ran out into the road just as a horse and cart were passing. The horse bolted, and allegedly to this day, horses refuse to pass by the pub.
As you leave the village, you pass the complex of Upper Mills, which includes the home of the well-established Empire Brewing, a forlorn stack of barrels beside the building reminding us that these are not normal times. A notice on the door states that the bottle shop is though open for takeaway sales 10-2 on Fridays and Saturdays, with social distancing in place. A few minutes later, you are in the countryside, the birdsong dominating save for the odd passing train up the hillside. There were a few people about; walkers some with dogs, some not, joggers, and cyclists. A bit more noise; a woman approached, loudly berating someone called Steve on her mobile. Otherwise it was a peaceful walk into increasingly open countryside.
This is an extremely pleasant walk, even when the weather is changeable as it was yesterday, The odd barge was moored here and there, the sound of the radio coming out of one of them the only sign of life. As the valley widens, there are fields either side of the canal, with a few cottages dotted about as you get closer to Marsden. I came to the Sparth reservoir, which is situated behind an embankment on the right, with another body of water to the left of the towpath which is an old mill dam.

The name 'Sparth' lent itself for a few years to a beer. Sparth Mild was brewed by the Riverhead Brewery which had been set up as part of a brewpub by Phil Holdsworth in the old Co-op on Peel Street in Marsden in 1995. All Phil's beers were named after local reservoirs: so there was Butterley Bitter, Cupwith Special, March Haigh Special Bitter, Redbrook Premium Ale,etc. The higher the reservoir above sea level, the stronger the beer, and so Sparth, being the lowest down, was the weakest. The Riverhead was a cracking place, a real destination pub, a great place for a beer or two after a walk on the moors. It was taken over by Ossett Brewery in 2006, and whilst some of the original beers may not be on, beer is still brewed at the pub, and it is still a pretty decent place to visit when in the area. And when it's open, of course.
I was by now approaching the outskirts of Marsden, large houses appearing on the right with their ample gardens sloping down to the canalside. Had it been earlier in the day, I may well have carried on to Tunnel End, where the canal disappears into a tunnel under the Pennines. The towpath disappears too, the tunnel running for over 3 miles before emerging at Diggle. There was a barge that used to take passengers along the tunnel at one time. I made the journey once from the Diggle side with some friends a few years ago, fortunately the boat had an engine so we didn't have to leg our way through as the original bargees did in the days when they were pulled by horses, who of course, couldn't go via the tunnel. It was a fascinating experience, the atmospheric tunnel with its mysterious splashes and echoes evoking images of those distant days.

It was time to turn around and head back along the canal to Slawit to collect the car, and head home for a pint after a most enjoyable walk.

*****************
I have said several times recently that I have never been big on drinking at home, always preferring the social drinking and ambience of a pub to staying at home with a few cans or bottles. But hey, along comes a lockdown and the old routine has to change and the habits of an increasingly expanding lifetime go straight out of the window. Cue to weekly deliveries of beer to my doorstep, supplemented by the odd addition from foraging in the supermarket.

In and amongst that foraging, I have made two important discoveries. The first is that Vocation Pride and Joy is available in cans at the Co-op up the road. The second is that St Austell Proper Job, a bottle-conditioned IPA from Cornwall, available at Sainsburys, is a wonderful beer. Light golden in colour, hoppy but not in a monster way, easy-drinking in a way that belies its ABV of 5.5%. A beer I had dismissed along with virtually all beers I had previously walked past on my pre-Covid visits to a supermarket as "bland and mass-produced". But having rediscovered Theakstons Old Peculier last year, I began to realise that it was too simplistic a view to take; amongst the bland and middle of the road there are some nuggets. Proper Job is one of them.

Sadly, last week it was announced that the guy responsible for producing Proper Job, Roger Ryman, brewing director at St Austell, had passed away with cancer at the untimely age of 52. Tributes were flowing on social media, and within one of them there was a link to an interesting short film in which Roger talked about St Austell and their beers. He led the transformation of the brewery's beer range during his 20-plus years there, enabling it to shake off its nickname of  'St Awful', whilst picking up scores of brewing awards along the way. Clearly a man who was passionate about his beers, and with so many kind words spoken by fellow brewers and people within the trade, it is obvious he will be missed well beyond his adopted home of Cornwall.

It may be a long way from Yorkshire - Roger Ryman was from Leeds - to Cornwall, but good beer knows no boundaries....