From Dean Clough To Manchester Central....

February 04, 2020
Last week was a busy one! Thursday night it was Halifax with some friends from the world of pubs and beer, then on Friday I paid my annual visit to the Manchester Beer and Cider Festival.... 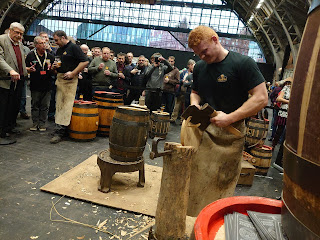 The road from Halifax town centre to the huge industrial mill complex at Dean Clough has become a well-trodden one by me over the past few months. Not only because out Tom has been working at the Next Level Bar - retro arcade games, nice enough bar, but regrettably no draught real ale - but because the Stod Fold bar there has become a magnet for the pub ticking fraternity as a result of its inclusion into the CAMRA Good Beer Guide for the first time. So a couple of months ago, Simon Everitt came to town for an evening with Alex aka Quosh and I, and then on Thursday, Martin Taylor and Duncan Mackay, along with Quosh, a couple of Jims, and a Luke, met me there for a tour around the town which also took in the Grayston Unity, and a couple of the new bars, The Meandering Bear and Kobenhavn, just in case they are selected for next year's Guide. It was a thoroughly convivial evening of chat about beer and pubs with the odd mention of football. You can read about Duncan, Martin, and Simon's quest to each visit every CAMRA pub in a piece from a year or two back in former Good Beer Guide editor Roger Protz's excellent blog, Protz On Beer.
Whilst in Kobenhavn, I had a pint of Five Points Best on hand pump. Five Points have just announced that their cask sales have more than doubled in the past 12 months, and a lot of the credit for it is down to this beer, which is - wait for it - a traditional bitter! Whisper it quietly, but there are a few signs of bitter making a comeback, as a number of the newer breweries are turning their hand to this British classic and adding it into their portfolio.


Next day, it was up early, breakfast at the Station Cafe, and then the train from Brighouse to Manchester Victoria. I walked down to the former railway railway station that is Manchester Central, situated behind the Midland Hotel. My mate Rob was coming along a little later, so I got myself a half from the expanded Beers from the Wood bar, and sat down at one of the tables nearby. I got talking to a guy from Norway, and it turned out he lived in Stavanger, home to the Lervig brewery, and apparently the beer scene over there is pretty healthy. The best beer from the wood I tried was probably Lost Hope, from Wakefield's rarely-seen-in-a-pub Five Towns brewery, a golden ale with Chinook and Mosaic hops which I rated 3 on the National Beer Scoring System.

Rob arrived, and after stopping for a few minutes to watch one of the coopers from Theakstons showing the skill that goes into the making of a wooden barrel, we duly set about the main Coast to Coast bar. We decided to start from the west and work eastwards. So a few beers from Liverpool and Merseyside were sampled, the stand-out for me being Campania, a Neopolitan ice cream milk stout from Mission Creep (NBSS 3). We did a swerve past Team Toxic, which is surely one of the worst names ever given to a brewery! Arriving in Greater Manchester, I had the best cask beer I had all day, a collaboration between Track and Sheffield outfit, St Mars of the Desert called Cydonia, a 4.8% hazy pale ale, dry hopped with Citra and Waimea hops which I rated 3.5 on the NBSS scale. Delicious! Having met the team from Nomadic of Leeds on a night out in Halifax a few days before, I felt I ought to try one of their beers, and so I sampled their 5.2% Sister Doris, a chocolate and vanilla stout, named after a Catholic nun who was also a Bavarian brewmaster. A very pleasant NBSS 3. I also enjoyed Northern Monk's 4.1% Eternal, a lovely pale session ale with a citrus aroma and finish, again NBSS 3.
We made our way to the keg bar, where the standouts were the eye-watering price asked for a third of Gateshead's By the River Brew's 4.5% Head Hunter DDH Pale, and, on a more positive note, the excellent 2018 Organic Harvest Saison from Suffolk brewers, Little Earth Project. This was absolutely delicious, with refreshing orchard fruits followed by a spicy finish. This probably just shaded the Track/SMOTD collab as being my favourite beer of the day.
So what did I think overall? Well, I didn't have time to try as many beers as I would have liked as Rob and I were going to a 60th in Brighouse that evening so we left just after 5. Most of the beers I'd had were pretty good and in many cases I was able to sample ones from breweries I'd not tried before. But I did think the Coast to Coast theme is not an original one and has been done at beer festivals before in some guise or other. This meant that there was no space - in an offering of over 400 - for cask beers from hotbeds of brewing such as Bristol, Newcastle, Scotland, or London, for example. I have had some excellent beer from all those areas in Halifax in the past couple of weeks! There was also no repeat of the popular Irish bar from 2019. So whilst the festival was well-organised, there was plenty of seating, and the atmosphere was good, it didn't for me hit the heights of 2018 or 2019, when it better reflected the amazing diversity of beer across these islands and beyond. I appreciate that there is always a temptation when organising such an event to try something different, but when the choice of beers and the churn of breweries means things are constantly changing from one year to the next, why change the formula too much?

But you know, of course, that I'll be back again next year....