From Brass Castle to Filey Bay....

February 26, 2020
I had a great trip east last weekend courtesy of Halifax & Calderdale CAMRA to visit Brass Castle Brewery in Malton and North Riding near Scarborough, followed by a visit to a few pubs on the coast at Filey.... 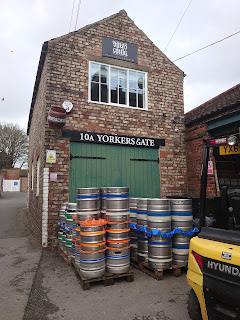 The trip was organised to present certificates to Brass Castle and North Riding breweries for their beers that had won awards at last September's Halifax & Calderdale CAMRA Beer Festival, and so, on a blustery but sunny Saturday morning I joined 20-odd other CAMRA members and boarded a coach at Halifax Bus Station for the journey to North Yorkshire.

An hour and a half or so after leaving Halifax, we arrived in the market town of Malton. My visits over the years to the town have been very sporadic, and I don't think I'd ever appreciated what a bustling little town it is. We got parked up near the town's market and walked through narrow streets to the Brass Castle Taphouse, behind which lies the Brass Castle brewery. The Taphouse is a lovely, welcoming bar managed by Ellis and was serving 2 bars on hand pump, both of which were excellent. Probably the earliest in the day that I've ever tried an 8% plus Imperial Russian Stout....

A few of us headed off round the back with assistant brewer Tim for a brewery tour. It is only small, with a capacity of 12 brewer's barrels (a brewer's barrel is 36 gallons or 288 pints), but in a small space they produce cask, keg, and even have their own canning line! The fermenters and conditioning tanks have names like Bill and Ben, and Tim conveyed the do-it-yourself approach and improvisation required sometimes when dealing with brewing equipment! The beers are all brewed to gluten-free recipes and all their cans are individually batch-tested so they can be certified as gluten-free and display the symbol. Their best-selling beer is, unusually, a dark beer, Bad Kitty, a delicious 5.5% chocolate vanilla porter. And I bought a can of it to take home for a very reasonable £2.50!

And so to the presentation. The award for Most Popular Beer at the Festival was for Black Forest, a 6% stout featuring cocoa and cherries served from a wooden cask, which received a very high number of votes and sold out in record time. Ellis - who is also training as a brewer - was presented with the award by Festival Organiser, John Hartley, who gave a highly-complimentary speech.
It was time to move on. I had enjoyed my visit to Brass Castle, and with plenty of pubs and a good food scene, I fancy paying another visit to Malton in the not-too-distant future.

Our next stop was in the village of Snainton, a few miles out of Scarborough, to visit North Riding Brewery, where the award was being presented for Gold Beer and Stout/Porter of the Festival for Fudge Brownie Stout, a delicious 7.4% double-mashed stout with seven different malts, again served from a wooden cask. Again, John gave a very complimentary speech when he presented the awards to Stuart Nielsen, the boss and head brewer, and like me he is a great fan of North Riding beers. A good time was had by all as we enjoyed a Marzipan Mild - it does what it says - and a Cascade, and had an interesting tour of the brewery. I will leave it there for now, but there will be a special feature on North Riding coming up soon!
Our final port of call was Filey, a few miles south of Scarborough. This was a place I visited regularly on family holidays in the sepia days of the sixties, when the sands were always golden, the skies always blue, and the sun was always warm. Or that's how I remember it.... My last visit had been several years ago when rain terminally stopped play at Scarborough Cricket Ground, and, at a loose end and with an hour or two to kill, I decided to visit the town and call in at Bonhommes bar, which was in that year's Good Beer Guide. It was raining that day, and whilst the weather today was fine, there was a vicious cold wind blowing in off the North Sea.
I visited Bonhommes again, situated near to the Royal Crescent Hotel on the Crescent. It was busy, with hardly a spare table to be found, as an unusual combination of Six Nations Rugby on TV paired with a music quiz held the attention of a lively but friendly crowd. The atmosphere was great, but sadly the beer didn't deliver, a real disappointment after the great beer we'd had earlier in the day. I had a pint of Febrewery, a golden ale which was only average (NBSS 2), the brewer I don't know as I couldn't see the pump clip properly. A real shame, because, apart from that, Bonhommes was a most enjoyable place for a beer.

Next up, after a stop-off for fish and chips, was The Cobblers Arms, a micro pub not far from the bus station. This, as the name implies, is situated in a former cobbler's shop, and offered a warm welcome from a cheerful, friendly landlord along with 4 hand pumps on the bar. It was busy, with most of the seats taken up, many by members of our party. Once again, though, the beer sadly disappointed, with the pint of Au from Three Brothers brewery barely scraping a 2 on the NBSS scale. Which is a shame, as I wanted to like the place, but maybe I was just unlucky on the day.
It was a few minutes walk to the third and final pub in Filey's 2020 Good Beer Guide contingent, and this was a much more traditional pub. The Star was quite busy when I walked in, with a large, warm, and nicely decorated lounge. There were several hand pumps on the bar, and whilst the beer selection was fairly conservative, the Theakstons Bitter was in fine fettle (NBSS 3), and definitely the best beer since we'd left North Riding Brewery.
And from there, it was a few minutes walk back to the bus station to catch the coach home. I have to say that the trip was very well organised, and many thanks to John and the guys at CAMRA for an excellent day out in North Yorkshire....