November 27, 2019
Until last weekend I had never been to Darlington in my life, so I decided to get the train there and go for a look around. Here's what I found.... 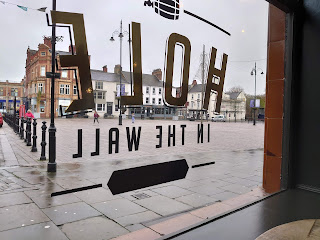 Fifty-six minutes after the train had left Leeds, it pulled into Darlington's classic Victorian brick station. I followed the throng heading towards the Way Out signs. I emerged from a subway into a cobbled car park, from which, not noticing any signs, I headed in the most promising-looking direction towards the town centre. Down a street of tanning shops and takeaways, towards a busy roundabout. A Hungry Horse and a Premier Inn lay in wait.

Darlington is an old railway town, its place in history secured by being at one end of the Stockton and Darlington railway line which, with the journey of Stephenson's Rocket in 1825, paved the way for the first steam-powered regular railway line established to carry both passengers and freight. The town became a major centre for engineering both for the railways and industry in general. Much of the funding for this came from the local Quaker community, who also shaped much of the market town's development, and who are reflected today in the football team's nickname and the odd pub name as mentioned shortly.

Landing in the town centre, I walked past a new office development named Feethams - presumably after the former football and cricket ground of the same name - and a few minutes later I emerged into the town's rather splendid market place. It was just before 12 but I spotted that one of the pubs listed in the Good Beer Guide, The Hole in The Wall, was open. I walked in to an attractive traditional bar with plenty of dark wood and comfy seating. There were a number of hand pumps on the bar, sadly a couple of the more appealing ones bore a Spoons-esque Coming Soon label. So I ordered a pint of Strongarm, the local favourite from down the road in Hartlepool, grabbed myself copies of Cheers and The Crack and plonked myself on a tall seat by the window. The beer, a typical, traditional North-Eastern ruby-coloured bitter, was decent enough (NBSS 3). There were a few customers dotted around. A group of typical Saturday afternoon lads sat down at the adjoining table, discussing all matters football, including the fortunes of Darlo (nobody here seems to call either the football team or the town itself anything other than 'Darlo'!). 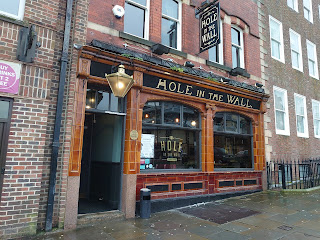 I moved on, across the square and past the market hall and the spectacular clock tower on to Prebend Row - many of the streets in the town centre are called rows, off which lead yards or wynds. I was looking for one of the yards, Mechanics, on which was based my next destination, The Quakerhouse. After a few minutes and a couple of false starts, I passed a Greggs and their main local rivals, Cooplands, and I spotted Mechanics Yard, essentially an alleyway. The Quakerhouse hardly announced itself, very little in the way of signage, but there was a guy having a smoke beside a blue door, so I reckoned this was it. I went in, into a small split-level bar, with wooden flooring. The bar was on the left. A small stage was located at the top of the higher level. Rock memorabilia covered the walls. I went to check on the beer situation. An ageing rocker - I mean that in the nicest sense - appeared and apologised for having too many dark beers on. No problem, I said, opting for a Manchester Brewery Pale Ale. It was pleasant and refreshing after the Strongarm (NBSS 3). A great soundtrack was playing - Boston, Steve Earle, Kansas to name but three. As a succession of people, mainly though not exclusively blokes, came and went to friendly acknowledgements from the landlord, I warmed to the place. Definitely worth seeking out.
The next pub was around 10 minutes walk away on Northgate, accessed via a subway under the busy ring road. The Half Moon is a traditional pub next to traffic lights. There were several beers on hand pump, and with the option to try a new brewery, Roundhill, from the wonderfully-named village of Cowpen Bewley, near Billingham, on November 16th I had my first Christmas beer of 2019! This was Ding, Dong, Merrily on Rye, a ruby-coloured beer with rye as the name suggests. I haven't tended to enjoy rye beers in the past, but this was pretty decent with a good flavour, worthy of a NBSS rating of 3. The pub was quiet, with just one other guy and the landlord, both of whom were watching the rugby on TV. The Half Moon has an on-site brewery, The Crafty Pint, but there didn't appear to be any on when I was there. I drained my glass, and headed off to my next port-of-call.
It was just over five minutes walk to the next pub on the itinerary, the Britannia. Now it turns out that this pub, set back slightly from the ring road was the local of one of my friends in the Stalybridge Buffet Bar, Andy, when he was growing up in the town! And I have to say, what a lovely, friendly pub it was. The beers on offer included Strongarm, Taylors Landlord, but I opted for a half of Draught Bass, which was in fine form. I went to sit down in a corner away from the bar. There were a couple of guys in who were chatting to the lady behind the bar, friendly conversation on local matters but not in an unwelcoming way. The Bass was another positive (NBSS 3) which I am sure would have past muster with Martin Taylor. The pub was immaculately clean, and the pub as a whole showed that the people in charge care very much about what they do. And you can't say that about everywhere you go!
The final two pubs were both on Coniscliffe Road. I made heavy weather of finding them, twice going off-piste as I followed the not-infallible Google Maps. I ended up approaching from the opposite direction to what I should have done, meaning the first place I came to was the Orb Micropub. With its bowed window, white painted exterior, and subtle signage, at first glance it looked more like a gift shop, but closer inspection showed there were plenty of people inside enjoying themselves. I walked in, past a narrow bench-like table to the bar. The beer choice was less traditional here, and in and amongst beers from the likes of Durham and Errant Brewing, there were some of their own beers on, brewed round the back. The small room was pretty full, but I did manage to find a seat to sample my half of Errant Culture Shock, a Belgian-style Saison. Sadly the beer wasn't to my taste so I only gave it a NBSS rating of 2.5. However, my next choice more than made up for it. It ordered a half of the Orb Home Sweet Home. This was 5%, a well-balanced American-style pale ale with citrus aromas and a touch of dryness which I thoroughly enjoyed (NBSS 3.5), and was my favourite beer of the day, not bad considering it has only been brewing for a few months. It makes sense, though: Orb stands for Orchard Road Brewery!
It wasn't far to the next place The Orb is at number 28, and a few doors away on the same side of the road is the self-explanatory Number 22. Unlike its near neighbour, this is a large pub, double-fronted and with a long interior, nice decor, and friendly staff. It is also home to the Village Brewer, whose ales, brewed by Hambleton, can be spotted on the bar of pubs across the North East. I didn't go for any of their beers but instead I opted for an old favourite, Everards Tiger. Sadly, this was very disappointing and I could in all honesty only give it an NBSS rating of 2. Shame, because the pub was warm and welcoming and hopefully this was a blip.
I needed to get my train back down south, and so headed back to the station from Number 22.

An interesting town with several decent town centre pubs, and which is well worth a visit....