Pinning the Tale on the Donkeystones.... 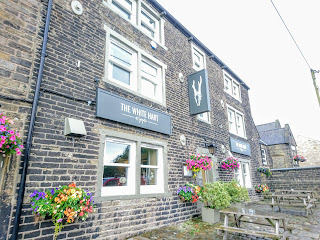 The White Hart is situated in the lovely hilltop Saddleworth village of Lydgate, an imposing 18th century building opposite the church. It is a very popular pub and restaurant, with rooms and function suite, and with sweeping views over the neighbouring hills and beyond towards Manchester, a very desirable location for weddings, prom nights, and other events.

It was raining when I pulled into the car park, navigating around a number of imaginatively-parked sprawling 4x4's. As I approached the entrance, I noticed that the appendage 'at Lydgate' was tagged on to the name. This has always seemed to me to be a pointless affectation, pretentious to say the least. You don't get the pubs of Manchester or Wakefield or Derby getting up to that trick!

So as I entered, my route to the busy bar blocked by a human corridor of old guys, I had low expectations. But, you should never pre-judge. The guys readily made way for me, I spotted 6 hand pumps on the bar, and the smartly-dressed guy who quickly came to serve didn't address me as 'sir'. I ordered a pint of Donkeystones Bad Ass Blonde, paid the man, and went for a lean just around the corner from the guys.

A few minutes later, my mate Alex aka Quosh, his mate Chris, and blogger Simon Everitt walked in. We exchanged greetings and retreated with our beers to one of the more pubby rooms off to the right of the bar and grabbed a corner table. We were here because Simon, whose excellent and most entertaining blog is entitled the British Real Ale Pub Adventure (BRAPA), needed to visit the White Hart - back in the Good Beer Guide for the first time since 2012 - as part of his quest to visit all the pubs in the Good Beer Guide, and Alex had kindly invited me along. And as custom dictates, each pub completed is highlighted in the Good Beer Guide in green marker pen, with Alex duly fulfilling the duties on this occasion.
As we chatted about pubs, the Beer Guide, and beers in general, we all commented on the quality of the beer we were drinking. My Bad Ass Blonde was excellent, refreshing and hoppy, easily worth a NBSS score of 3.5. The other guys had all opted for another Donkeystones beer, Cotton Clouds, which was also rated highly. The White Hart, after my initial wariness, was an enjoyable spot for a pint, and with beer of this quality, I will pop in again when I get chance.

Whilst Simon's primary aim is Good Beer Guide pubs, he is always happy to visit other potential future entries for a pre-emptive tick, and Alex suggested we visited the Donkeystones Brewery Tap, down in the valley below at Greenfield. As I hadn't been before, and even though I was on a tight timescale, I decided to go along. Alex led the way as we drove past the large houses lining the road in Grasscroft, down to the tight bend by the station where we turned off for Greenfield village. As we approached the King William, we turned left up the hill, then off to the right where we then turned into a small industrial estate on the left. The Donkeystones Brewery occupies a couple of the units, their presence denoted by a distinctive sign on the doors...
And it's not just the sign that's distinctive, what about that name? Well, the original donkey stones were made from a mix of stone, powdered bleach, cement, and water, which was then ground into a thick paste, cut into slabs, and left to dry out. The original use was to give greasy steps in textile mills a non-slip finish, but they came to be used domestically to clean doorsteps and window sills, often handed out by rag and bone men in return for items. One of the biggest manufacturers was Eli Whalley, who were based a few miles away from Greenfield at Ashton-Under-Lyne until they closed in 1979. It was another manufacturer, though, Edward Read and Son, from Manchester, who produced the 'Donkey' brand, and the name stuck as a generic.

We spotted the entrance to the tap, and went in to a decent-sized room, with the bar off to the left displaying several of their strikingly large oval hand pump clips, with a number of taps on the wall behind, each with a see-through cylinder showing the colour of the beer. Beyond the bar, through a window, you could see some of the tanks in the brewery. There is a small stage as you go in, tables and bench seating, and a stove for when the winter cold kicks in. The friendly lady behind the bar sorted us out with the beers, the others opting for darker ones, whilst I had a half of the 3.8% APA, made with Chinook and Columbus hops which was very enjoyable, having plenty of flavour for a low-strength beer. The others were raving about theirs, which was I think the Javanilla, about which more later.
It was a pleasure to meet Simon, who lives in York. As he travels across the country so much on his quest, I suggested it must take a lot of planning. He agreed and said that planning, travelling, and writing up his blog - which are usually quite lengthy - takes up more time than actually being in the pub. And unlike Retired Martin and Pubmeister, his two big 'rivals' in the Beer Guide pub tickers game, he has to fit it all around work and watching Hull City when he can! And that planning will start all over again when the new Good Beer Guide comes out next month. And no doubt our paths will cross again at some point depending on which unvisited local pubs are listed.
I had to move on, so I bade everyone my farewells. It had been a lovely, convivial catch-up, a better-than expected pub, and an excellent friendly brewery taproom, but it was time to leave. The others were moving on to the Church Inn in Mossley, and then on to Stalybridge, and I look forward to reading Simon's blog on the evening in due course!

As I left the taproom, and went into the car park, I spotted an open door into the brewery. Never one to pass up on the chance for a nosey, I stuck my head in. A couple of guys in wellies were working. One spotted me and greeted me, I asked if I was OK to have a quick look around, and he said no problem. And it kind of rounded the visit off nicely. They had been busy brewing Cotton Clouds for the upcoming music festival of the same name, due to take place nearby next weekend, as well as a new beer yet to be released. I was speaking to Thomas, who had recently joined Donkeystones from the Saddleworth Brewery, based at the nearby Church Inn in Uppermill. With the head brewer, Richard, having been at Greenfield Brewery, there are very strong local connections, but Donkeystones are very much brewing their fine beers in their own style. Thomas's colleague, Adam, came over for a chat, and I snapped a picture of the pair which I said I would stick in the blog. And here it is....
And with that, I headed back over the hill in the showers.

But that wasn't all from Donkeystones for the weekend. The following day I was at the Cross Keys Beer Festival in Siddal, Halifax, and spotted one of their beers on the bar. This was the Javanilla, so I tried a half. It was delicious, a rich and well-rounded vanilla and coffee stout with added java espresso coffee beans, and weighing in at 5.3%, it kicked like a mule.

In fact, a bit like the small brewery itself....