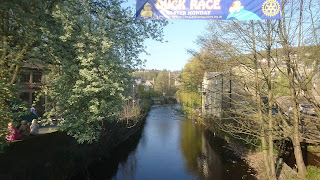 The Easter sunshine continued to smile on us as the 14.55 from Brighouse pulled in to Hebden Bridge, a place I normally visit regularly, but aside from a couple of visits to the Trades Club to see Kathryn Joseph and Michael Chapman, this was my first visit this year. Earlier, I had popped in for a quick pint at the Commercial/Railway next to Brighouse Railway Station, where there is always a friendly welcome at this ever-popular local's pub.
There were plenty of people about as I made my way to my first destination in Hebden Bridge, Vocation and Co, where all the outside seating was taken up. All this Easter weekend they were hosting a takeover of a number of the taps from the innovative Swedish brewers, Omnipollo - the name being a combination of 'omnipotence' and 'pollo', the Spanish word for chicken. They are unusual in that have no brewery of their own; indeed one of the founders, Karl Grandin, is a graphic designer, with the brewing side left to co-founder Henok Fentie, who cuckoo-brews at friendly breweries all over the world with regular collaborations. Such is the regard that their innovative, ground-breaking beers are held with their stunning packaging that they were placed in the Top 10 breweries in the world by ratebeer.com. So it's a big deal, then. I opted for a half of Niki, a 5.5% beer brewed with the aim of striking a balance between the hoppiness of an IPA and the drinkability of a pale ale. Featuring Citra hops, it certainly made for a refreshing, pleasant drink on the hottest day of the year so far. I noticed what looked like a Slush Puppy-style machine churning away at the side of the bar.
It turns out this was producing Soft Serves, which are designed to be served as a topping to a half of some of the beers. Essentially it is a sorbet version of the beer with lactose and milk sugars to add a smooth and creamy texture and mouthfeel to the beers. But at £5 a go, I didn't bother, as that was in addition to the price of the beer. Undoubtedly innovative, with flavours and styles covering everything you could possibly think of, and plenty that you wouldn't, Omnipollo are challenging conventional thinking and boundaries with beers that appeal to a modern fashion-conscious market. I read two blogs this week which gave two sides to this. One was a re-read of a blog by Sean Brown aka the Crafty Postman describing a tasting of Omnipollo beers at Buxton last year; the other was a piece from Manchester blogger Pub Curmudgeon suggesting that the growth of craft ales was creating worldwide beers at the expense of regional specialities. Both had something interesting to say from two completely different angles.

I went back out into the sunshine. I decided to call into Nightjar, as I hadn't been in for a while. I ordered half of Kalifornia, in my opinion the best of the Nightjar beers, brewed down the road in Mytholmroyd. This small bar was pretty empty, in part due, no doubt, to the fact that an alarm was bleeping. It turned out that it was the till, and as no one could come out to sort it until Tuesday, the friendly girl behind the bar would just have to put up with it! I stayed for another half out of sympathy. It was irritating, though, it was enough to drive one to drink...

...Or Drink? in my case. Here there were some more interesting beers. I ordered a pint of Squawk Pavo, which was very refreshing and hoppy. Martin behind the bar was explaining about a drink the colour of weak Ribena to a customer, and when I showed interest, he poured me a taste from one of the taps. It was a Cherry Saison, from - surprise, surprise - Little Valley. Well-balanced, with a sour cherry flavour, it was an enjoyable drink from a brewery not known these days for producing particularly interesting beers, tending to fall under the shadow of their Cragg Vale neighbours, Vocation. And there was more interest in the form of P45 Czechmate, from Manchester Union Brewery. This is brewed in the style of a Czech Pilsner to give a smoother mouthfeel and more subtle taste characteristics. It takes 8 weeks from being brewed to being ready to drink, and it certainly had a much rounder, more balanced feel than most lagers. I spent a most enjoyable hour in Drink? before it was time to move on.
The streets were still busy as I walked over to Calan's. The annual Duck Race was due to take place on Easter Monday, and there were posters and banners advertising it all over the town - what happens to these plastic ducks after the race I don't know - do they get rounded up and recycled for next time? The yard in front of Calan's was overflowing with people, but it was quieter inside as I ordered my beer. I got talking to a group who had caught the train over from Burnley. And before I moved on, I bought one of the pork pies - for those that don't know, Calan's sell the best pork pies around. Good to see that Nadine and Damian are doing well here, continuing on the good work from Alan and Alyson, and good to see an increasingly wide range of beers being offered too.

It was getting time to head back towards the station. As I walked past Vocation and Co, I noticed the girl from Nightjar standing outside.

Maybe that bleeping had finally driven her out....