The Rainy Streets of Glasgow....

This week the COP26 climate summit is taking place in Glasgow if you hadn't noticed. Purely coincidentally, I recently made my first proper visit to the city and discovered a fascinating place with plenty to see and do, some great pubs, and some friendly people. Here's the first of two blogs on my visit.... 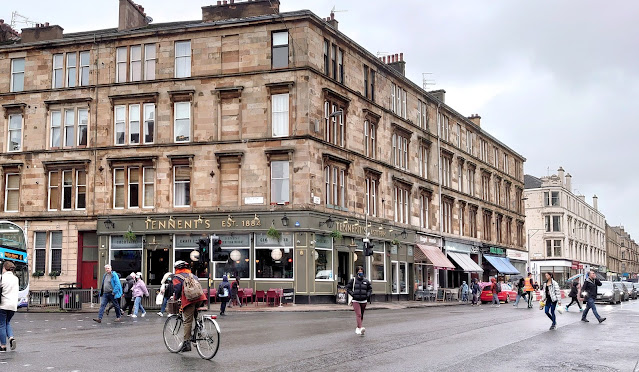 Despite having been to Scotland many times over the years, one glaring omission was Glasgow, where I had only been a couple of times for work, a quick change of trains, and one hectic lunch stop many years ago, so I had hardly explored the place. So I decided I would put things right and booked myself a stay for a few days so that I could explore Scotland's biggest city and former industrial powerhouse.
I had decided to go via train from Halifax via Preston and then onwards to Glasgow Central. In less than 4 and a half hours I would be in Glasgow. Well, that was what was supposed to happen. What actually did happen was that due to a broken down freight train just north of Lockerbie, our train had to return to Carlisle, where the only option was to catch a Scotrail stopping train to Glasgow, calling at Gretna Green, Annan, Dumfries, Sanquhar, Kilmarnock, Barrhead, and several other more forgettable  places en route. It could well have been an attractive journey, as the occasional break in the clouds amidst the showers suggested it might be, but it didn't compensate for an unwelcome addition the time of my journey. Instead of arriving into Glasgow around 2.40, it was going up to 6 when we finally arrived, thereby scuppering any plans for an afternoon exploring.
I found my hotel quickly, but I was in desperate need of food. In fact, I was that hungry that I granted myself an emergency relaxation on putting any money Tim Martin's way and went in to the nearest pub selling any food, Wetherspoon's Counting House situated in a former bank on the corner of Queen Street and St Vincent Place, just a few damp minutes' walk away from my Travelodge. It had a spectacular interior with a central dome and reminded me of a Spoons I had visited in Bristol a few years ago. It was of course back to masks and checking in due to Scotland's current Covid requirements. The pub was quite busy with a healthy mix of age groups with teatime pint men, groups of students, and the usual Wetherspoons old guys. I went for a generally risk-free option of ordering burger and fries, and from a beer range that was predominantly English, I ordered a pint of Salopian Hop Twister, which was pleasant enough and which I rated NBSS 3 on the CAMRA beer rating system. My burger duly arrived, it was ok, and once I had finished, I headed off to see what Glasgow on a Monday night had to offer.
There was a pub a few minutes' walk away on St Vincent Street called the Drum and Monkey. It was a Nicholson's house and as is generally the case with their pubs it had a pretty smart interior. Many of the tables were taken but I found a free one by a window where I consumed a pint from Edinburgh-based brewers, Stewarts. Jack Back, a 3.7% hoppy pale which was at least a Scottish beer in another generally English selection. I had come across this beer recently when it had been on the bar at the Meandering Bear in Halifax, and it was a decent enough NBSS 3 on this occasion. There was a plaque on the wall outside telling the pub's story, which was interesting, but overall, the pub itself was a tad disappointing. 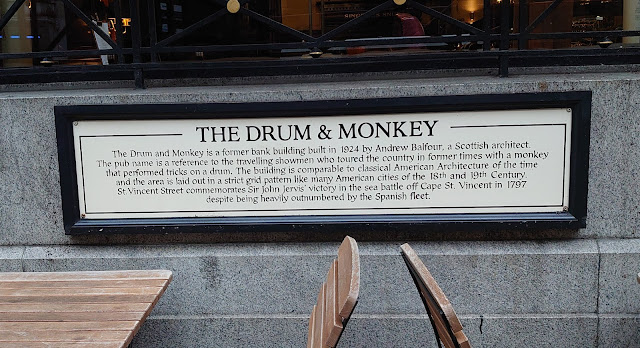 What turned out to be the final pub of the evening was the Horse Shoe, which was just around the corner. It has a historically important interior, with a long horseshoe-shaped bar, dark wood, mirrors, and ornate fireplaces. It also had a very disappointing beer selection, with Landlord and London Pride the only beers available. Little did I expect when I had been drinking Pride in the Old Parcel Office at King's Cross little over a week earlier I would be drinking it in a pub over 400 miles away a few days later! It was ok to be fair, though, another NBSS 3 rating. The general underwhelming nature of the evening was compounded by a pub that promised to have more in the way of interesting beer, the Raven on Renfield Street, being in complete darkness and clearly closed. So I trooped back sadly through the damp streets to the hotel and had an early night.
After a decent sausage butty for breakfast the following morning, I took the subway out to the West End, alighting at Kelvinhall, and visited the stunning, gothic Kelvingrove Art Gallery and Museum, where I pottered around for a while seeing an exhibition on the Glasgow Boys artists group, the history of the city, and a local wildlife exhibition (which features a haggis!) but you could easily spend a day in there. I then went in search of the Hunterian Art Gallery and the Rennie Mackintosh Museum, both around the campus of Glasgow University. I didn't manage to find either, but I did manage to locate my first pub of the day not too far away, Tennent's Bar (opening picture). This is set on the corner of a busy junction on Byres Road in a solid-looking tenement block, a spacious open plan single room with a large rectangular bar and several TV screens dotted around the room. Apparently it was originally set up by a member of the Tennent family, producers of the ubiquitous lager you see around these parts. The pub was quite busy despite being not much after noon, but people were coming in for a bite to eat, joining the solitary drinkers nursing a pint while they watched the racing. Here I ordered a pint of Stewarts 80/-, which was a real, typical Scottish beer. A traditional heavy, it was well-balanced and enjoyable (NBSS 3.5), the best beer of the trip so far in the best pub so far. A friend told me after I got back that he used to work behind the bar here when he was a student at the university, not that many of you will be that interested, but there you go!
I had walked past the next pub on my way to the Kelvingrove. This was Three Judges on Dumbarton Road, and was a more traditional bar, again on a tenement corner. A small bar selling an eclectic range of beers but again, Sassenach-dominated, with representatives from Bank Top, Pennine, and Elgoods. I opted for a Redcastle Monster Hop, which was the only Scottish beer on offer, brewed up to the north-east in Angus. It was only after I'd ordered a pint that I realised it was 6%, a bit strong considering it was only about 1pm, but when I commented on this, the landlord smiled and said he wouldn't tell anyone. I found a table in this one-room bar and nursed my pint for a while, enjoying the vibe of what I seemed to be the most authentic Glaswegian bar I had visited so far. There was a steady churn of people coming in out of the rain for a quick pint or a wee nip, but there was also a solid core of older guys who weren't in any rush, studying their paper or phone over a pint, or chatting to a pal at a neighbouring table. I finished my beer, a pleasant enough NBSS 3, and headed back to the subway - or Clockwork Orange as it was dubbed due to its original colour scheme - to resume my journey. 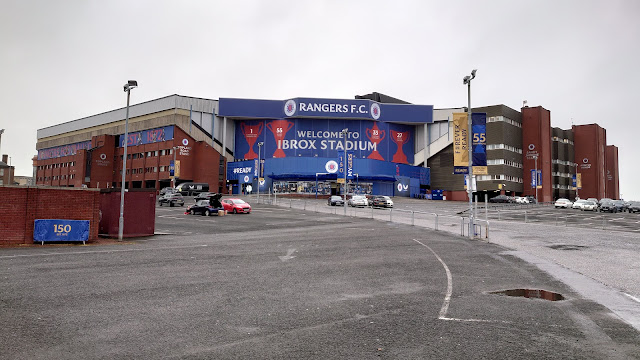 I went back to the subway to resume my journey back to the city centre, deciding to alight at Bridge Street and cross the bridge over the Clyde. However, I hadn't realised that there would be a pleasant surprise waiting directly across the road from the subway station that would keep me south of the river for a little longer....
To be continued....
follow me on twitter: @realalemusic