A Visit To The Leopard and Other Spots....

Last week I headed down to South Yorkshire and paid a very rare visit to Doncaster to visit a number of pubs in and around the town centre. Here's what I found.... 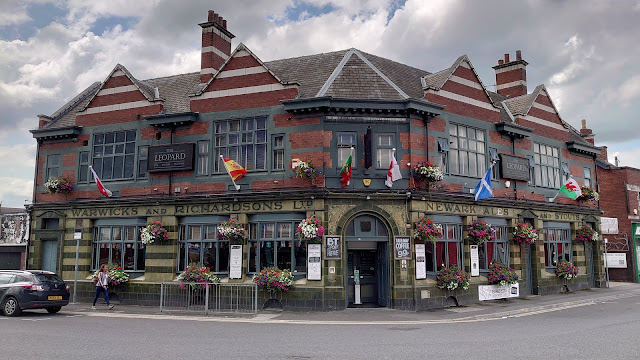 The last time I visited Doncaster was a few years ago when we were following Halifax Town away and we had to change trains there for our connection to Lincoln. We had about 40 minutes to wait, so we decided to go find a pub. The nearest one - and it was only a few yards away - was a pub called, surprisingly, the Railway. There was some ok hand pump beer on, but that day the pub wore it charms lightly, and didn't really stick in the mind. Whether it clouded my view or not, I don't know, but I never considered giving Donny another look. Until last week.

The Railway is still there, and still open. The big difference now is that there is an even nearer pub now if you are changing trains, or if you are not on the train and simply want a good pint, and it is to be found on Platform 3B. This is the Draughtsman, situated in a former Victorian buffet bar which had been empty for 18 years, and opened up in 2017. It is a lovely one-room bar with attractive tiling on the walls, a friendly little place with several beers on both cask and tap. I ordered a half of Sputnik from North brewery in Leeds and very nice and refreshing it was on this warm afternoon, coming in with a rating of NBSS 3.5. The Draughtsman is a typical station bar in terms of the comings and goings of its mixed clientele seemingly coinciding with the railway timetable. If you only have time to visit one place in Doncaster, this is most definitely a fine place to call in.

The second pub of the day was only a few minutes walk away, and I passed the previously-visited Railway on my way there. And it is an absolutely beauty. This is the Leopard, which straddles a corner in all its tiled and bricked splendour (opening photo). 'Warwick and Richardsons Ltd Newark Ales and Stouts', it proclaims amidst the tiles. Now Warwick and Richardson, whose former Northgate Brewery still stands in part in the Nottinghamshire town, stopped brewing in the 1960's after being acquired by John Smiths, but there was beer available from an interesting source within the Leopard. This was from the 1086 brewery from Cusworth Hall a few miles away, where the brewery was set up in 2018 in a former brewhouse. The Leopard is owned by the same group, the Doncaster Culture & Leisure Trust, and on the bar amongst a selection from Yorkshire breweries including Ossett was Roger of Bully, a dark ruby and malty ale, named after a local landowner and bigwig in these parts from the days of the Norman Conquest. It was a decent enough beer, which I rated NBSS 3. Whilst the inside of the Leopard is comfortable and tidy, it is pretty functional, with rooms off to either side of the entrance, and doesn't match up to the stunning exterior. There is also a further room upstairs which is used for gigs and events. But it was a very pleasant place to sit and have a pint, with a number of old guys engaging in banter and conversation at the neighbouring tables. And where did the name come? I couldn't find anything when I searched online, so I am sorry guys, but I just don't know! Unless of course someone out there can help?

Now even Doncaster's best friend wouldn't describe the town, with its busy roads, multi-storey car parks, and somewhat brutalist shopping centre, as a looker, but it has some very attractive pubs. After the Leopard, I moved on to another beauty, the Little Plough, with its outside tiling recalling another former brewery, 'Hewitts Grimsby Ales', another victim of the takeover frenzy of the 1960's. Inside was a bustling little tap room with a group of old guys getting excited at the racing on the TV. The lady behind the bar managed it all well, bringing me a pint of Acorn Barnsley Bitter in no time at all. This was cool and delicious (NBSS 3.5), retailing at the exceedingly good price these days of £2.80. A great friendly little pub with excellent beer.
The next stop on my tour was the brewery tap of Doncaster Brewery, situated just a few streets away at the end of a quiet street which led to a multi-storey car park. Confusingly, the entrance wasn't by the shop-like front which has a welcoming mural in the window, but round the back, although it turned out a car had recently crashed into the front of the building. I walked in through a small outdoor area and passed the room housing the brewery, and ended up in the bar, where a few people were enjoying a drink. There was none of the brewery's products on offer, so I opted for a Quantum State from Atom on hand pump, which was a delicious hazy pale which I rated NBSS 3.5. The lady behind the bar was the wife of the brewer and said they hadn't yet resumed brewing due to the uncertainties caused by the pandemic, but hoped to do so in the next week or two. The Atom ran off unfortunately, so I switched to the single-hop Galaxy from Triple Point Brewery of Sheffield, which wasn't quite as good as the Atom but still a worthy NBSS 3. This is a great place to visit for the cider drinker as well, and unusually there were as many ciders on draught as beers. I liked this place as well, a run of 4 places that I would happily recommend to any visitors to Doncaster.

It was about 10 minutes walk to my next destination and again involved negotiating some of the busy roads that run around the town. I was heading for the Hallcross, which at one time had its own in-house brewing company, Stocks, best-known for their strong ale, Old Horizontal. I spotted the pub in the distance, a large sign announcing its presence though with none of the style of the Leopard or the Little Plough, next to an Indian restaurant unusually named Poppadoms & Cream. There were several tables outside, but I opted to sit in by one of the large open windows. The beers are now contract-brewed by well-established Nottinghamshire brewers, Welbeck Abbey. I ordered a half of St Leger Gold, but sadly it was a little too short on flavour and body (NBSS 2.5). The pub itself was more of a town pub than the others I had visited, friendly enough but a little short on character.
I had one on other place to visit on my list, and this was close to the market and Corn Exchange. This was the Queen Crafthouse and Kitchen, which was a friendly place with a great rock soundtrack blasting out which was very much in keeping with the decor. The beer wasn't bad either, I ordered the 3.9% MOA from Shiny, the first time I had any beer from this Derbyshire brewery for some time, and I rated it as a 3 on the NBSS scale. I made my way back to the station and just had time for a quick half at the Draughtsman before catching the train back.
I had an excellent afternoon in Doncaster, 6 pubs and a decent crawl with only one slight disappointment. And with plenty more pubs in the town with some having a good write up on WhatPub? there is more to go at if you dig below the surface. I bumped into a friend the other night and suggested that whenever we can resume our annual Good Friday pub awaydays, there would be far worse places to go than Doncaster....
Follow me on twitter: @realalemusic